Drinking three cups of coffee a day cuts your risk of dying from heart disease by up to 17%, study shows

Your risk of death from heart disease can be reduced by up to 17 per cent by moderate consumption of coffee — up to three cups a day — a study has found.

Researchers led from the Semmelweis University in Budapest investigated the association between coffee habits and incidences of heart attack and stroke.

They found that moderate coffee consumption can also reduce your risk of stroke by up to 21 per cent over people who don’t drink coffee at all. 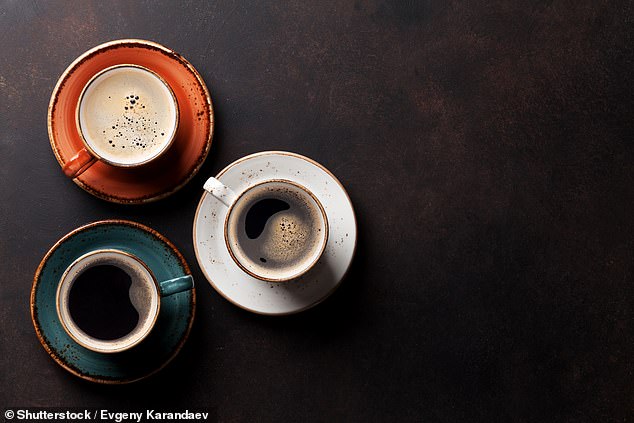 WHAT ARE THE HEALTH BENEFITS OF COFFEE?

Scientific studies into the health effects of coffee are being done all the time and have, in the past, claimed the drink brings fairly big health benefits.

Research by the National Cancer Institute in the US last year found people who drink six or seven cups of coffee each day were 16 per cent less likely to die from disease within a 10-year period than those who didn’t.

Less likely to get depression

Another study, done by the Harvard School of Public Health, found that women who drank four or more cups of coffee per day were 20 per cent less likely to suffer from depression.

British scientists at Goldsmiths, University of London, found women who drank coffee – 250mg of caffeine, to be precise – tended to have a higher pain threshold than those who didn’t.

The Institute for Scientific Information on Coffee last year said it had trawled through nearly 30 studies of almost 1.2million people to find drinking three or four cups of coffee each day could slash the risk of developing type 2 diabetes by 27 per cent.

‘This is the largest study to systematically assess the cardiovascular effects of regular coffee consumption in a population without diagnosed heart disease,’ said paper author and cardiologist Judit Simon of Hungary’s Semmelweis University

‘Our results suggest that regular coffee consumption is safe, as even high daily intake was not associated with adverse cardiovascular outcomes and all-cause mortality after a follow-up of 10 to 15 years.

‘Moreover, 0.5 to 3 cups of coffee per day was independently associated with lower risks of stroke, death from cardiovascular disease and death from any cause.’

In the study, Dr Simon and colleagues compared the health and coffee consumption habits of 468,629 adults over an average period of 11 years.

Data for the study was collected from the UK Biobank — a large-scale database containing detailed genetic and health information on half-a-million participants.

The team divided the subjects into three groups based on their daily coffee intake, with 22 per cent reporting that they didn’t drink coffee regularly, 58.4 per cent drinking a half to three cups a day and 19.5 per cent having more than three cups.

At the start of the study, none of the participants had any sign of heart disease — and the cohort had an average age of around 56.2 years.

Furthermore, the team found that moderate coffee drinkers appeared to have a 21 per cent lower risk of incident stroke than those who did not drink coffee at all.

To explore potential mechanisms that might explain these associations, the team next analysed the heart structure and function of 30,650 participants using data collected by magnetic resonance imaging, or MRI, scans.

‘The imaging analysis indicated that compared with participants who did not drink coffee regularly, daily consumers had healthier sized and better functioning hearts,’ Dr Simon explained.

‘This was consistent with reversing the detrimental effects of ageing on the heart.

‘Our findings suggest that coffee consumption of up to 3 cups per day is associated with favourable cardiovascular outcomes,’ Dr Simon concluded.

‘While further studies are needed to explain the underlying mechanisms, the observed benefits might be partly explained by positive alterations in cardiac structure and function.’

The full findings of the study were presented at the 2021 congress of the European Society of Cardiology, which is being held virtually from August 27–30.

THE CAUSES OF STROKE

There are two major kinds of stroke:

An ischemic stroke – which accounts for 80 per cent of strokes – occurs when there is a blockage in a blood vessel that prevents blood from reaching part of the brain.

The more rare, a hemorrhagic stroke, occurs when a blood vessel bursts, flooding part of the brain with too much blood while depriving other areas of adequate blood supply.

It can be the result of an AVM, or arteriovenous malformation (an abnormal cluster of blood vessels), in the brain.

Thirty percent of subarachnoid hemorrhage sufferers die before reaching the hospital. A further 25 per cent die within 24 hours. And 40 per cent of survivors die within a week.

Age, high blood pressure, smoking, obesity, sedentary lifestyle, diabetes, atrial fibrillation, family history, and history of a previous stroke or TIA (a mini stroke) are all risk factors for having a stroke.

SYMPTOMS OF A STROKE

Of the roughly three out of four people who survive a stroke, many will have life-long disabilities.

Both are potentially fatal, and patients require surgery or a drug called tPA (tissue plasminogen activator) within three hours to save them.