Masami Hasegawa was just an undergraduate student when he first visited the Izu Islands of Japan in 1977. Every year since, he has taken the eight-hour ferry ride from Tokyo southeast to this cluster of volcanic islands to pursue a passion he has had since childhood: catching lizards.

A single lizard species, Okada’s five-lined skink, dominates all of Izu’s nine major islands, while its major predator, the Japanese four-lined rat snake is found on most, but not all, of these islands. This makes the islands a bit like the Galapagos, where Charles Darwin first described how selective pressures — in this case those predatory snakes — may shape the islands’ lizards in surprising ways.

With a fishing pole baited with mealworms, Dr. Hasegawa caught lizards all over the Izu Islands and then measured their body temperatures with a cloacal probe.

“At the time, I don’t have any specific purpose or objective,” he said. But then he noticed there was a “great difference in the body temperature among the islands.” In other words, on some islands, the lizards were running much hotter than their cousins living on the other volcanic rocks.

After more than 40 years of study, Dr. Hasegawa, now a professor of biology at Toho University, and his colleagues published evidence that explains the cause of this quirk: Where the lizards fear snakes, their body temperatures were on average 5.2 degrees Fahrenheit higher than on snake-free islands. Their legs grow longer, too, helping them run faster.

The study shows how the presence of a predator can alter the biology and behavior of a species in measurable ways. It also hints how a warming world could affect such predator-prey relationships. The research was published last month in Ecology Letters. 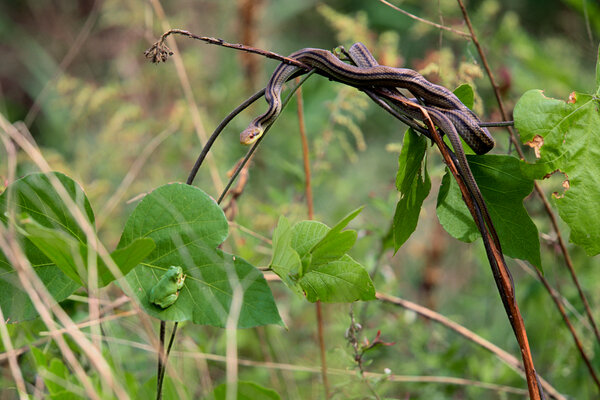 Dr. Hasegawa had hoped to publish his observations sooner. But he had to put his original plans on hold in the mid-1980s when locals on one snake-free island, Miyake, released weasels to control a rat problem. That also caused the collapse of its lizard population. It was the only snake-free island where he had collected data and he did not have time to start over on another island.

“So that’s why this study takes such a long time,” he said.

The study picked up again after Dr. Hasegawa started collaborating five years ago with Félix Landry Yuan, now a graduate student at the University of Hong Kong.

Mr. Yuan ventured to the Izu Islands with a tripod and a makeshift racetrack strapped on his back. After catching lizards on Kozu, an island with snakes, as well as the snake- and weasel-free Hachijo-Kojima, Mr. Yuan recorded the lizards running along the track with a camera to calculate their running speeds at different body temperatures.

Lizards and snakes are both ectotherms, meaning that their body temperatures depend on their surrounding thermal environment. Body temperature, in turn, affects their ability to move; immobile at cold temperatures, their movement speed increases as they warm up, before reaching a plateau and rapidly declining when it gets too hot.

The presence of predators also had evolutionary effects on the lizards’ bodies; lizards on islands with snakes had longer hind legs.

“We’re essentially linking the presence of the snakes to the lizards running faster, those lizards having longer legs and those lizards foraging at warmer body temperatures,” Mr. Yuan, the study’s lead author, said.

The data collected for the study also highlighted another serendipitous, if worrying, finding. The Izu Islands have only gotten warmer since Dr. Hasegawa first set foot there, and so have the lizards. From 1981 to 2019, the average lizard body temperature rose 2.3 degrees Fahrenheit across all the islands, correlating with climatic warming.

Rising temperatures may threaten ectotherms, which comprise the majority of animal species, and alter the dynamics of prey-predator relationships, said Shane Campbell-Staton, an evolutionary biologist at the University of California, Los Angeles, who was not involved in the study.

He added that the new research was “at the forefront of where we need to go in the field writ large if we’re really going to try to understand how climate change is going to affect ectothermic species.”