Jim Tinnell, a wildlife rehabilitator in Ohio, was suspicious when he received his first sick blue jay of the season on May 24.

Three days later, he had six sick songbirds in his care. All the birds appeared emaciated and functionally blind, their eyes crusted shut. Mr. Tinnell gave each bird a warm eye compress and applied antibiotic ointment, to no avail. All the birds died within 48 hours.

In the weeks following, Mr. Tinnell took in bird after bird, each with the same eye condition. Before they died, many developed neurological symptoms: Their heads bobbed back, their bodies bounced, and their blind eyes fixated upward toward the sky. Many of the afflicted birds were blue jays, grackles and starlings.

This bird disease has been reported in 10 states, including Virginia, Maryland, West Virginia, Indiana, Ohio and Kentucky, where wildlife agencies were also inundated with reports.

The cause of these symptoms remains mysterious. But on Friday, the United States Geological Survey, which has coordinated an investigation of the disease among the states, concluded in a statement circulated to wildlife agencies that it could rule out a number of pathogens that had not been detected in the afflicted birds.

Those that have been ruled out include maladies like avian influenza and West Nile, which have spread among bird species and can sometimes jump to humans. Others on the list are salmonella, chlamydia and a host of flaviviruses, herpesviruses and Trichomonas parasites, according to Dr. Christine Casey, a state wildlife veterinarian for the Kentucky Department of Fish and Wildlife Resources.

Several diagnostics laboratories are continuing to test samples for potential bacterial diseases, viruses, parasites and toxins, Dr. Casey said. In July, staff at wildlife agencies said, reports seem to be tapering — although it’s unclear whether that means that the virus is receding or that people are no longer reporting cases. City Wildlife in Washington, D.C., received one case in April; 91 in May; and 62 in the first week of June. Now, the vets see only two to four cases a week, said Dr. Cheryl Chooljian, the clinic’s director. 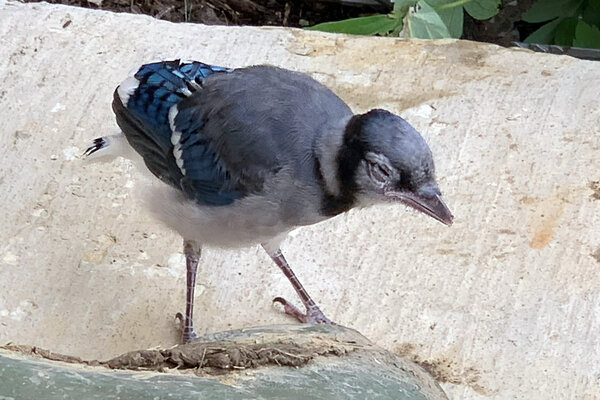 In Dr. Chooljian’s experience, not all the birds display the same symptoms. Some have only the crusty eyes, with severe swelling and white mucus discharge. Others have just neurological issues, twitching their eyes, arching their neck, or circling or rolling their bodies in a seemingly endless cycle.

A vast majority of diseased birds taken into clinics and rehabilitation centers have died. At City Wildlife, all the birds arrived with such severe symptoms that they died within days or their disease progressed to the point that they had to be euthanized. “Not being able to do anything but relieve the suffering of these birds has been a very emotionally taxing experience,” Dr. Chooljian wrote in an email.

Nearby, the Wildlife Center of Virginia was also overrun with sick birds that did not respond to medication. “I’ve never lost so many birds before,” said Jennifer Toussaint, the chief animal control officer at the center. Out of concern that the disease could be contagious to other birds, both City Wildlife and the Wildlife Center of Virginia now recommend putting the birds down on intake.

Although the cause of the disease officially remains a mystery, people have proffered a number of theories. On the internet, the favorite culprit is Brood X, the periodical cicadas that spent the last 17 years underground only to emerge this year in teeming, singing masses, around the time the bird disease emerged. Though many cicadas’ long-awaited bacchanalia has gone off without a hitch, others have fallen prey to a zombifying white fungus, which some have speculated could be the cause of the disease.

“Who knows at this point,” Dr. Casey said, adding that she does not want to rule out anything but doubts the cicada hypothesis. “In general, more of us are leaning toward an emerging bacterial infection,” she added, pointing to the eye lesions that seem similar to the bacterium-caused conjunctivitis.

The full results from the diagnostics lab may not come for several more weeks, according to Dr. Casey. The dead birds, their eyeballs and their flesh have been put through a battery of molecular tests for fungi, parasites and bacteria. There is still a possibility, however, that all these tests will be inconclusive, she said, adding that the diagnostics lab is holding on to a handful of corpses for retrospective testing in future years.

In Ohio, all the adult birds Mr. Tinnell received died within a few days. But he has nursed eight fledglings back to full health, he said. The young birds also arrived in poor condition, eyes crusted shut, but Mr. Tinnell said they responded well to his course of treatment: warm eye compresses, oral antibiotics and an antibiotic eye ointment twice a day. Some birds opened their eyes in as little as three days, he said.

“They’re looking at me right now, and they’re absolutely beautiful,” Mr. Tinnell said, an incessant medley of chirps audible on the other line.