Physician shortages in the US are on the rise, and one area where we’re likely to have too few doctors is in the field of obstetrics and gynecology.

Doximity, a professional medical network, released new research on the problem on Wednesday.The report examined data from the Doximity network, which has over 70% of US physicians as members, including 43,000 full-time, board-certified OB-GYNs.

“There has been a lot of work done on the shortage of primary care physicians but not that much has been on OB-GYNs, even though it’s an important type of specialty,” Christopher Whaley, lead author of the report told Business Insider. “Patients often see their OB-GYN as their primary care provider.”

The study looks at the percentage of OB-GYNs nearing retirement age, the number of younger practicing OB-GYNs, and workloads for OB-GYNs. By combining these factors, the researchers created a list of the top 10 cities most likely to suffer OB-GYN shortages in the coming years.

More than these top 10 cities will be affected, because there’s an OB-GYN shortage throughout the US. The study references aprojection from the American College of Obstetricians and Gynecologists (ACOG), which says there will be a shortage of up to 8,800 OB-GYNS by 2020, and a shortfall of up to 22,000 by 2050.

ACOG has also estimated thathalf of US counties lack any OB-GYN.

But the specificity of the report on different localities across the US, is what Dr. Amit Phull, the medical director at Doximity ,thinks can hopefully lead communities to enact change from the local level.

“The locality in the study adds this actionable component,” Phull told Business Insider. “It’s harder to attack the problem on a national level, but maybe this can light a fire under various organizations that can actually fix the issue.” 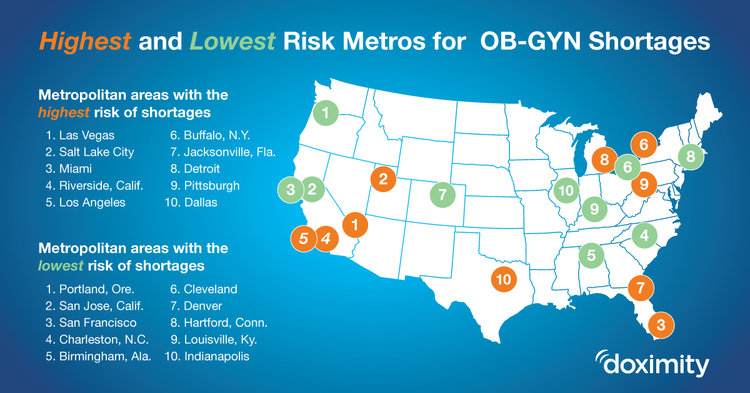 The graphic shows the highest and lowest risk cities for OBGYN shortages.The graphic is courtesy of Doximity.

The OB-GYN workforce is getting older

The report showed that 35% of OB-GYNs are at least 55 years old and nearing retirement age. The researchers looked at 50 metropolitan areas and found that in 33 of them, at least one third of the OB-GYN workforce was 55 and older.

The report notes that an aging OB-GYN population would not be as serious a concern if there were more young OB-GYNs entering the profession, but none of the largest cities studied in this report have even 30% of their OB-GYN workforce under the age of 40.

With the shortage, the workload of an OB-GYN will likely increase

With an aging workforce, retiring OB-GYNs could cause workforce shortages, meaning an increase in everyday duties for the existing workforce.

For Whaley, doing this study showed him the vast difference cities have when it comes to healthcare delivery, “there is an extreme variation in the distribution of OB-GYNs,” he said. ‘This study shows you that Las Vegas or Miami has a different OB-GYN market, than say, New York City.”

Even with birth rates declining, the OB-GYN shortage is a problem

The researchers also touch on the decline of birth rates in the US. The study references data published by the Centers for Disease Control and Prevention, which reported that the number of births in 2018 fell 2% from 2017 to the lowest number in 37 years.

But while there has been a decline in birthrates in the US, Phull said there’s still a need for OB-GYNs.

“OB-GYNs provide care outside of the scope of deliveries for pregnant women. They offer different types of screenings and preventative care,” he said. “A woman’s overall health could be compromised because of lack of access to these services which are in short supply.”