The southern cassowary is often called the world’s most dangerous bird.

While shy and secretive in the forests of its native New Guinea and Northern Australia, it can be aggressive in captivity. In 2019, kicks from a captive cassowary mortally wounded a Florida man. They don’t take kindly to attempts to hunt them, either: In 1926, a cassowary attacked by an Australian teenager kicked him in the neck with its four-inch, velociraptor-like talons, slitting his throat.

Not a bird it’s advisable to spend too much time in close quarters with, in other words. But as early as 18,000 years ago, people in New Guinea may have reared cassowary chicks to near-adulthood — potentially the earliest known example of humans managing avian breeding.

“This is thousands of years before domestication of the chicken,” said Kristina Douglass, an archaeologist at Penn State University and lead author on the study, which was published Monday in the Proceedings of the National Academy of Science.

The first people arrived on New Guinea at least 42,000 years ago. Those settlers found rain forests stalked by large, irritable, razor-footed cassowaries — and eventually worked out how to put them to use. During excavations of rock shelter sites in the island’s eastern highlands, Susan Bulmer, an archaeologist from New Zealand, collected artifacts and bird remains that ended up at the National Museum and Art Gallery of Papua New Guinea. Among those remains were 1,019 fragments of cassowary eggshell, likely plucked from wild cassowary nests.

What were the people of the rock shelters doing with the eggs? Dr. Douglass and her colleagues scanned the shells with three-dimensional laser microscopes. Using statistical modeling, comparisons with modern ostrich eggs and careful eyeballing of the shells’ microstructures, they were able to work out how far along each egg had been before hatching.

Some eggs — early in development — showed burn patterns, suggesting they’d been cooked. But a large number of fragments — particularly those from around 11,000 to 9,000 years ago — came from almost fully developed eggs. And while people might have been eating the embryos, Dr. Douglass said, “there’s a great possibility that people were hatching those eggs and rearing cassowary chicks.”

To support this claim, she points to some Indigenous groups on the island that prize cassowary meat and feathers as ritual and trade goods. They still raise cassowary chicks from eggs taken out of wild nests. Hatchlings imprint on humans easily and are relatively manageable. (It’s only once they reach adulthood that the danger begins.)

While collecting eggs and raising hatchlings is an early step in domestication, it’s unlikely that cassowaries — fairly intractable, as birds go — were ever fully bred in the manner of chickens, which were domesticated 8,000 years ago. But if New Guinea’s early inhabitants hand-reared cassowaries, they would have been some of the earliest-known humans to systematically tame birds, the team concluded.

“These findings might radically alter the known timelines and geographies of domestication that tend to be the most widely understood and taught,” said Megan Hicks, an archaeologist at Hunter College in New York who did not participate in the study. “Where mammals are the best-known early cases (dogs and bezoar ibex), we now know that we need to be paying closer attention to human interactions with avian species.” 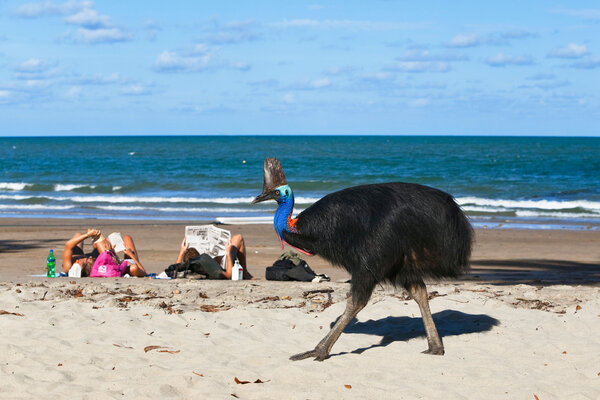 The eggshells carry another interesting implication. Based on the patterns in the eggs, the team suggests that people deliberately harvested eggs within a narrow window of days late in the incubation period. This isn’t easy: Cassowary nests are often quite difficult to find and guarded by unforgiving males, and the eggs have an incubation period of about 50 days.

In order to fetch cassowary eggs at a consistent level of development — whether to eat them or hatch them — the ancient New Guineans had to know specifically when and where cassowaries were nesting, Dr. Douglass said. That precision implies sophisticated knowledge — even management — of cassowary movements.

“It suggests that people who are in foraging communities have this really intimate knowledge of the environment and can thus shape it in ways we hadn’t imagined,” Dr. Douglass said.

April M. Beisaw, chair of anthropology at Vassar College, who was not involved in the study, said it was “an excellent example of how the smallest and most fragile remainders of the past can provide evidence of important cultural practices.”

“The techniques described can be used in other places to further develop our understanding of how important birds have been to humans, long before the domestication of chickens,” she added.

Just don’t try to hatch cassowaries at home, if you know what’s good for you.