NASA plans to follow up exploration of Mars with moon mission

Stargazers around the world will be able to enjoy the glow of the Strawberry Moon on Thursday night.

According to NASA, the “marginal supermoon” will appear opposite the sun in Earth-based longitude at 2:40 p.m. ET for much of the Earth, though it won’t be visible until it appears above the horizon. 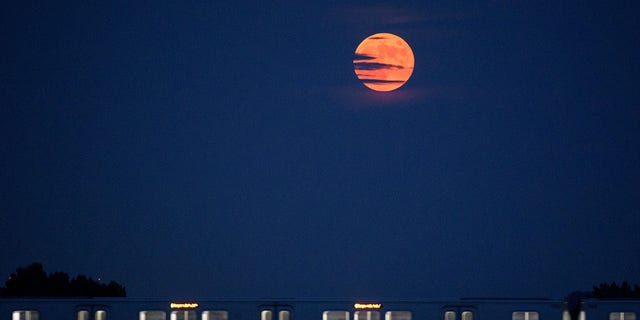 The moon rises as a Metrorail car crosses the Potomac river in Washington, D.C., on July 16, 2019.
(Credit: NASA/Bill Ingalls)

“Particularly for Europe’s higher latitudes, when the full moon is low it shines through more atmosphere, making it more likely to have a reddish color (for the same reasons that sunrises and sunsets are red),” wrote NASA’s Gregory Johnson. “For the Washington, D.C. area, on the morning of June 25, 2021, the full moon will reach its highest for the night at 1:39 a.m. EDT, only 24.6 degrees above the southern horizon, the lowest full moon of the year.”

The website Time and Date has a city-specific moon calculator that shows the moonrise in New York City at 8:53 p.m. EDT and Los Angeles at 8:35 p.m. PT.

A virtual livestream of the event will be held as the Strawberry Moon rises over Rome, Italy, at 3 p.m. ET by the nonprofit The Virtual Telescope Project.

However, unlike the pink and blood moons, the Strawberry Moon will not appear against the evening sky like a giant, red or pink strawberry.

According to the Maine Farmer’s Almanac, the Strawberry Moon was named by the Algonquin tribes of the northeastern U.S. for the region’s short season for harvesting strawberries.

But, the Strawberry Moon has many other names, including the mead moon – a European drink created by fermenting honey with water, fruits, spices, grains or hops – or honey moon.

The word “honeymoon” traces back to at least the 1500s in Europe and may be tied to the honey moon or its color.

In Hindu culture, this full moon corresponds with the celebration of Vat Purnima.

For Buddhists the full moon is the Poson Poya, which celebrates the introduction of Buddhism in 236 BCE and for another tribe mostly inhabiting the Mid-Atlantic region – and devoted to the study of the moon – calls June’s full moon the LRO Moon in honor of the Lunar Reconnaissance Orbiter they launched in June 2009.

NASA noted that there is debate over whether the Strawberry Moon is close enough to Earth to be categorized as a supermoon and pointed out that the moon is smaller in apparent size and brightness than the series of previous supermoons earlier this year.

Doughnut-maker Krispy Kreme has decided that the Strawberry Moon qualifies, announcing Monday that it would sell a limited edition “Strawberry Supermoon Doughnut” at participating shops across the country.