Starting in the late 2000s, Colleen Reichmuth and Ole Larsen made a number of visits to Six Flags Discovery Kingdom in Vallejo, Calif., to hear a walrus make some noise. The male Pacific walrus, named Sivuqaq, was approaching sexual maturity, which meant he might soon spout the signature din that male walruses make in breeding season.

Dr. Reichmuth and Dr. Larsen had come specifically to hear Sivuqaq emit a male walrus’s characteristic breeding sounds: knocks, metallic gong-like beats and piercing whistles. But Sivuqaq, who stole the screen during appearances in “50 First Dates” with Adam Sandler and Drew Barrymore, was uncooperative. Some days, he clapped his fore flippers together thousands of times in a row while underwater, incessantly.

“At first it was distracting,” Dr. Reichmuth said. She and Dr. Larsen had come for gongs and knocks, not claps. But they realized the incessant claps were worth studying, and although it has taken a number of years, they published their observations and recordings of the clapping behavior on Wednesday in the journal Royal Society Open Science. To the researchers’ knowledge, there is no documentation of wild walruses caught in a similar act of applause.

Dr. Reichmuth first met Sivuqaq when he was a pup. The walrus was brought down to Six Flags in 1994, when he was recovered from a Native Alaskan subsistence program. He shares the Yupik name for what is now the city of Gambell, Alaska. In captivity, Sivuqaq’s life was documented much more extensively than that of any wild walrus. He died at age 21 in 2015, a few years after this research was completed. 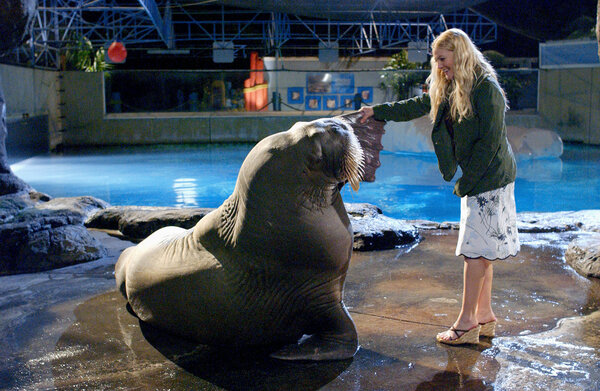 Dr. Reichmuth decided to study walruses after she heard a recording of a wild male walrus. The creature’s sounds seemed straight out of “Stomp,” the infamously percussive off-Broadway show. “It was like a racket on a construction site,” she said. “With a pile driver, or occasionally someone dropping a big sheet of metal off a building.”

When Sivuqaq came of age, Dr. Reichmuth teamed up with Dr. Larsen to measure the walrus’s sound production during rut, the period when male walruses feel the urge to breed. Scientists still do not know exactly how walruses make their knocks and gongs. One hypothesis is that knocks come from within the walrus’s body and gongs may be produced by a male walrus’s air sacs, Dr. Reichmuth said.

The researchers installed hydrophones in Sivuqaq’s tank and filmed the walrus clapping with a high-speed black-and-white video camera. The video reveals the walrus clapping his flippers asymmetrically. Dr. Reichmuth compares it to hitting a catcher’s mitt; by angling one flipper to move like a blade in the water, the walrus reduces resistance and can strike at a much higher velocity. When the researchers slowed down the frames, they spied a bright splotch forming between the flippers post-clap: cavitation bubbles, which produce the noise you make when you crack your knuckles.

“Walruses are able to clap underwater so hard that the water between their flippers vaporizes into a cloud of bubbles, which then collapse onto themselves to produce an extremely loud sound,” David Hocking, a senior curator of vertebrate zoology at the Tasmanian Museum and Art Gallery, who was not involved with the research, wrote in an email. Dr. Hocking observed similar clapping behavior in wild gray seals during breeding season, and hypothesized that it was a demonstration of strength and fitness to rivals and potential mates.

The authors of the new study believe Sivuqaq’s clapping has a similar function, because the walrus started clapping as he approached sexual maturity and the behavior was often accompanied with a visible erection. “I think it’s hard for these animals to suppress,” Dr. Reichmuth said, referring to Sivuqaq’s cacophonous drive to breed.

Sivuqaq clapped in an unshakable tempo: 1.2 seconds between claps, the same tempo as the knock sounds he emitted. And his claps were loud; perceptible to humans standing yards away from the four-inch-thick glass walls of his tank. But Sivuqaq’s sounds never reached the full complexity of wild walruses’ breeding displays, which can consist of long patterned sequences of pulses varying in length and punctuated by bell-like sounds, according to a 2003 study. In Dr. Reichmuth’s eyes, the captive walrus produced song components but could not produce complex songs if denied the ability to listen to and learn from other adult walruses’ sounds.

With a data set of one walrus, it’s hard to know whether wild walruses clap, too. “Is this something that one male did? Is it a new way of producing a functionally similar behavior?” asked Eduardo J. Fernandez, an animal welfare scientist at the University of Adelaide, Australia, who was not involved with the research. “For this walrus, it seems to be related to a breeding display,” he said.

Dr. Reichmuth and Dr. Larsen are working on a paper analyzing the biological mechanisms behind Sivuqaq’s other, more familiar breeding sounds — what they originally came to Six Flags to study.