The pasta HACK that could save you up to 6.5p per serving: Scientists advise pre-soaking noodles in cold water before simmering them at 176°F for just one minute

It’s often said that to tell pasta is cooked you should throw it at the wall and see if it sticks.

That is one thing, but given that the UK’s love affair with pasta sees us spend around £4,690,000 a week making it, is there a more cost effective way to cook the Italian delicacy?

Well, according to scientists at Nottingham Trent University there is an optimum method that could save you up to 6.5p per serving.

It involves first soaking dried pasta in cold water for two hours, then cooking it in simmering – but not boiling – water at 176°F (80°C) for one to two minutes. 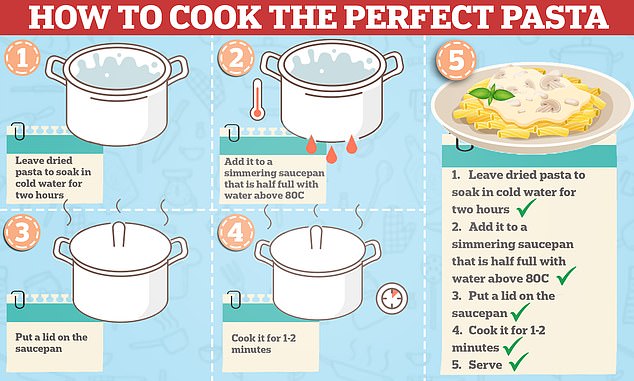 Process: Scientists at Nottingham Trent University say there is an optimum method to cook pasta to save time and money. It involves first soaking dried pasta in cold water for two hours, then cooking it in simmering – but not boiling – water at 176°F (80°C) for one to two minutes 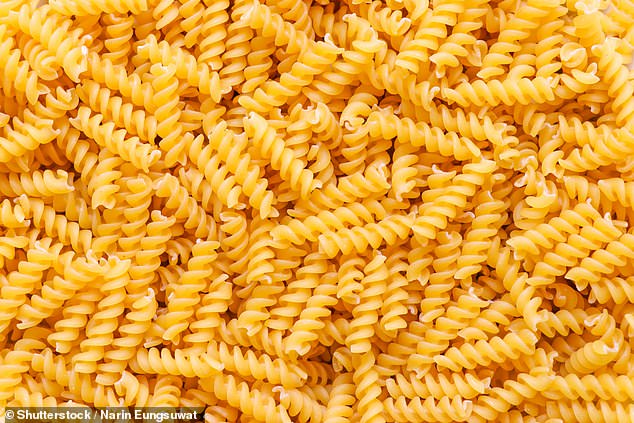 There are two processes that occur when pasta is cooked: firstly, the rehydrating and softening of it within ten minutes, and secondly the heating of it to cause proteins to expand and become edible

4. Put a lid on the saucepan to quicken the cooking process

In terms of volume of water in the saucepan, the scientists calculated that using half of the standard one litre amount was more cost effective while also not comprising the texture of quality of the pasta in any way.

The first thing the experts looked at was what happens to pasta when it is cooked.

There are two processes which occur at the same time: firstly, the rehydrating and softening of dried pasta within ten minutes of cooking it in boiling water, and secondly the heating of it to cause proteins to expand and become edible.

The research estimated that when taking into account that the standard cooking method is to put 100g pasta into 1 litre of boiling water for ten to 12 minutes, the cost of doing so is 12.7p per serving on ceramic hobs, 10.6p on induction hobs and 7p on gas hobs.

Nottingham Trent scientists therefore looked at how they could reduce this cost by breaking down how much energy is used during the cooking process.

They estimated that a massive 60 per cent is used to keep the water boiling, meaning that any way of reducing the cooking time would have a big impact on the overall cost.

That’s where the two processes are important.

The first one, the hydrating of the pasta, doesn’t actually require heating at all. All it needs is the water.

Therefore, the scientists said, rather than boiling in water for 12 minutes, food lovers can just rehydrate dried pasta by putting it in cold water for two hours.

As there is no heat involved, there is no energy used, which saves a total of 6p on the serving cost.

In fact, just turning off the hob midway through cooking and allowing the pasta to sit in the residual heat will save around 3p.

The cold water immersion completes one process of pasta cooking, but it doesn’t satisfy the other, which is to heat it and cause proteins to expand.

But there are still more ways to save your pennies, the scientists say. 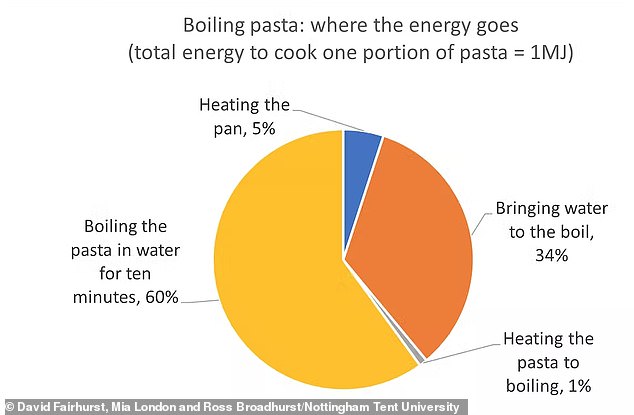 The researchers estimated that a massive 60 per cent of energy is used to keep the water boiling, meaning that any way of reducing the cooking time would reduce the overall cost

That’s because they found that halving the water to 500ml still resulted in great pasta, so heating it took less time and therefore used less energy.

Not only does less water use less energy, but the experts say it is not necessary to heat it to 212°F (100°C) because simmering it at 176°F (80°C) will still allow the granules of protein to dissolve.

This reduction in temperature saves around 0.5p per serving, the research estimates.

However, 500ml is the cut off, because slashing the water volume to one-third did not work. It allowed too much starch to build up in the saucepan and led to clumps of unevenly cooked pasta.

Another thing that didn’t work was using a microwave to heat pre-soaked pasta, as this produced the worst quality noodles of the entire experiment.

The research was revealed by David Fairhurst, a lecturer at Nottingham Trent University, on The Conversation.

Check out this piece on the rise of the restaurant robots

Christmas may be over, but what was the environmental impact of your festive dinner?

And would YOU pay £40 for a vegan beef tenderloin? It has gone on sale in the UK

WHAT IS THE CARBON FOOTPRINT OF SANDWICHES?

The overall annual consumption of sandwiches across the UK has the same environmental impact as the use of around eight million cars a year, scientists have claimed.

Researchers arrived at the figure after studying the carbon footprint of different types of sandwiches – both home-made and pre-packaged.

The team from the University of Manchester calculated the carbon dioxide equivalent (CO2 eq) – a standard unit for measuring carbon footprints – for the snacks.

Their calculation was based on British Sandwich Association (BSA) figures that 11.5 billion sandwiches are eaten each year in the UK.

This shows the total carbon footprint (grams of CO2 per sandwich) of 24 shop-bought sandwiches.