Astronomers spy rocky and icy wanderers of all shapes and sizes zipping past Earth all the time. But earlier this month, they were flabbergasted when they caught sight of the largest comet they’d ever seen.

One of its discoverers, Pedro Bernardinelli, an astrophysicist at the University of Pennsylvania, conservatively estimates the object’s dusty, icy nucleus is between 62 and 125 miles long. That means this comet is as small as five Manhattan Islands, or it’s larger than the Island of Hawaii. Hale-Bopp, which lit up night skies in the late 1990s with its 25-mile-long nucleus, was long perceived to be a giant among comets. But the nucleus of this comet, Comet C/2014 UN271, “is still two or three Hale-Bopps across,” said Teddy Kareta, a planetary astronomy graduate student at the University of Arizona. “It’s just wild.”

“With a reasonable degree of certainty, it’s the biggest comet that we’ve ever seen,” said Colin Snodgrass, an astronomer at the University of Edinburgh.

The comet is currently inside Neptune’s orbit. Over the next decade, it will scoot toward the inner solar system. More of its ices will be vaporized by the sun’s glare, causing it to effervesce and brighten. In 2031, it will get within a billion miles of the sun — almost but not quite making it to Saturn — before journeying back to the coldest, darkest fringes of our galactic neighborhood. 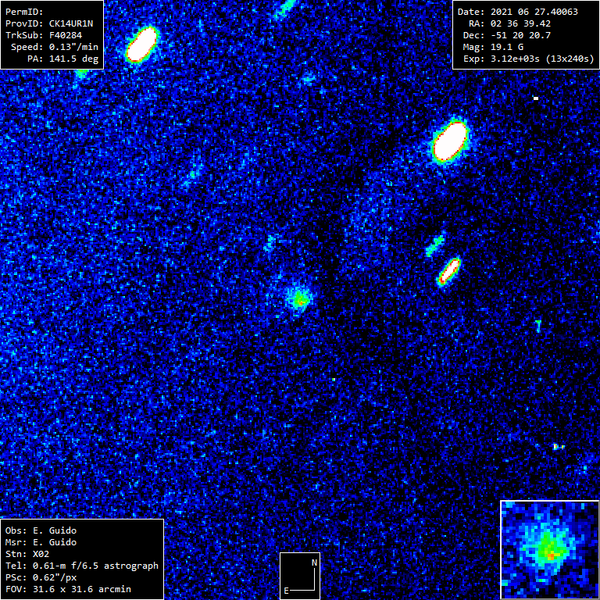 Although it’s unlikely a spacecraft will be able to rendezvous with the comet, spotting it while it’s still two billion miles away means that astronomers can train their telescopes on it and watch it flare, then fade, in staggering detail over the next 20 years.

“Comets are like cats. You never know what they’re going to do,” said Meg Schwamb, an astronomer at Queen’s University Belfast. “I’m ready to get the popcorn.”

Comets are icy remnants as old as the sun, and may have delivered both water and organic matter to the solar system’s rocky worlds. This frosty leviathan, then, is a fantastic opportunity to uncover a bounty of cometary secrets.

It was first spotted with the Dark Energy Survey, an effort to map distant galaxies and exploding stars in order to investigate the universe’s accelerating expansion. To galaxy hunters, “all those rocks in the foreground are just a nuisance,” Dr. Snodgrass said. But to comet chasers, “they’re quite an interesting nuisance.”

A search of the survey’s databanks found over 800 novel iceballs with orbits larger than Neptune’s. One, designated 2014 UN271, was “by far the most interesting one we found,” Dr. Bernardinelli said.

A series of images of the icy object captured from 2014 to 2018 revealed it was definitely icy, probably elongated, and had emerged from the Oort cloud, an expansive “shell” of primordial space debris surrounding the solar system — nothing unusual so far. But when its dramatic dimensions were announced on June 19, scientists were blown away. It’s not even close to being the largest object beyond Neptune. But its sunward trajectory meant that, if its ices transmogrified into gases, it would become the largest comet ever found.

Their curiosities piqued, Dr. Snodgrass, Dr. Schwamb and their colleagues used telescopes in South Africa and Namibia to take a closer look — and they spied a coma, an envelope of gas, surrounding it. Despite its considerable distance, some of its more volatile ices — carbon dioxide and carbon monoxide, perhaps — were already being vaporized by slivers of sunlight.

It was official: This was a colossal comet. On June 24, this newly identified gadabout was renamed Comet C/2014 UN271 (Bernardinelli-Bernstein) after its discoverers Dr. Bernardinelli and Gary Bernstein, an astronomer at the University of Pennsylvania.

This comet takes roughly three million years to make one complete circumnavigation of the sun. The last time it was here, modern humans had yet to evolve. The next time it comes around, who can say what will have come of our species. This may be the only chance humanity will get to glimpse it.

In 2031, if you take a halfway-decent telescope to a dimly lit area, you will be able to see this specter shift among the stars. At a distance of one billion miles, it won’t provide the cinematic streak some comets are famous for, but you will see a flicker of light.

Many of the night sky’s flickers belong to unfathomably distant objects. But not comets — and, like all its icy cousins, this one is “both weird and beautiful,” Mr. Kareta said. Its visitation reminds us that the universe isn’t a static expanse, but a chaotic ballet, full of wondrous things always in motion.