The International Space Station could soon have a FILM STUDIO and sports arena! UK firm reveals plans to attach a ‘Space Entertainment Enterprise’ to the ISS as early as 2024

The International Space Station could have a new dedicated film studio and sports arena by the middle of the decade, if a British firm gets its way.

Space Entertainment Enterprise (SEE) , based in London, has revealed plans for a film, TV, sport and entertainment broadcast module for the ISS, to launch in 2024.

It is being built by Axiom Space, which is working on its own tourist and research module for the station, also scheduled to launch and attach to the station in 2024.

SEE already has a foundation in space entertainment, claiming to be producing a movie, in partnership with Tom Cruise, that will be filmed in part on the station.

Known as SEE-1, the new entertainment centre will be attached to the Axiom module, which will eventually separate from the ISS to form its own dedicated space station.

No costs or budgets have been revealed for the spherical inflated module, but it is expected to be 20ft in diameter and open to third parties for making film and TV.

The International Space Station could have a new dedicated film studio and sports arena by the middle of the decade, if a British firm gets its way. Artist impression of the new module 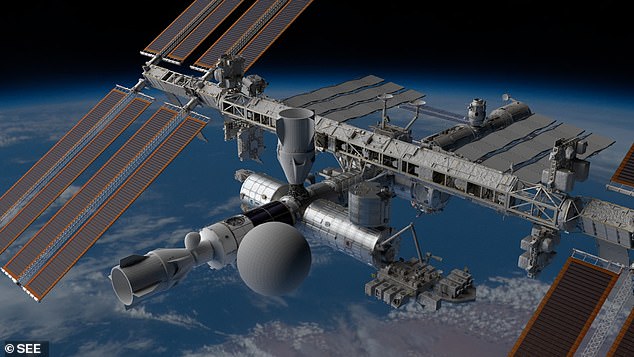 Known as SEE-1, the new entertainment centre will be attached to the Axiom module, which will eventually separate from the ISS to form its own dedicated space station

When the International Space Station was first occupied by astronauts from Russia and the US, in November 2000, it had an expected life of 15 years.

This has since been extended to 2025, and is now expected to be operational until at least 2030.

Axiom Space will launch the first commercial module in 2024.

Axiom hope to eventually detach its commercial module from the ISS, and use it as a foundation for a full commercial space station by 2028.

Once fully assembled, Axiom Station will nearly double the useable volume of the International Space Station.

NASA is already working with Axiom on the design and implementation of the first commercial module, which will be connected to the ISS via a docking port and passageway.

This forms part of an increasing commercial shift for the famous space-based facility, with the first all private astronaut crew set to launch next month.

NASA has committed to fund the ageing station through 2030, and Russian has signalled a renewed commitment through the launch of a new laboratory module.

After that it is thought there will be a raft of commercial stations orbiting the Earth, including one from Axiom Space, that will include SEE-1.

If launched, it will be the world’s first content and entertainment studios and multi-purpose arena to be operated in space.

Co-founders, Dmitry and Elena Lesnevsky, said it was ‘an incredible opportunity for humanity to move into a different realm and start an exciting new chapter in space.’

‘It will provide a unique, and accessible home for boundless entertainment possibilities in a venue packed with innovative infrastructure which will unleash a new world of creativity.’

As well as movies and events produced by SEE, the firm say it will provide a venue and production infrastructure for hosting and filming third-party events.

SEE-1 is planned to become operational starting in December 2024, early in Axiom Station’s on-orbit assembly – while it is still attached to the ISS.

When the station’s initial configuration is completed and it is ready to separate from the ISS in 2028, the content creation venue will comprise one-fifth of its volume.

‘Adding a dedicated entertainment venue to Axiom Station’s commercial capabilities in the form of SEE-1 will expand the station’s utility as a platform for a global user base and highlight the range of opportunities the new space economy offers.’ 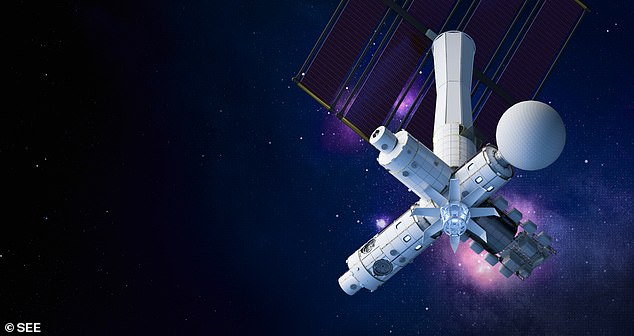 It is being built by Axiom Space, which is working on its own tourist and research module for the station, also scheduled to launch and attach to the station in 2024

‘The inflatable module design provides for around six meters diameter of unobstructed pressurized volume, which can be adapted to a range of activities – including an onboard state-of-the-art media production capability that will capture and convey the experience of weightlessness with breathtaking impact.’

SEE confirmed it was producing the new mystery space movie staring Tom Cruise, which was confirmed by NASA in 2020.

It is thought Axiom Space will be responsible for taking Cruise and a producer to the station – possibly as soon as next year.

SEE, co-founded by producers Elena and Dmitry Lesnevsky, includes consultants that have worked for HBO and Viacom.