Party City, one of the country’s leading suppliers of colorful balloons, disposable tablecloths and small signs declaring “Oh, Kale Yeah!,” announced recently that it would shutter 45 of its 870 stores in 2019. Across the internet, many said it was because of a shortage of helium.

A spokeswoman for Party City said that was a big misunderstanding. Yes, some locations have been struggling to meet helium demand. And yes, the company’s chief executive, James M. Harrison, issued a statement telling shareholders that the company had just signed a deal with a new helium supplier. But Party City closes some locations every year to invest more in its most profitable locations, she emphasized. The fact that it is closing more stores than usual in 2019 has nothing to do with helium, the company says.

What exactly is going on here? Here are some answers:

Is there actually a global helium shortage?

Yes indeed. And it’s much bigger than Party City.

This is the third global helium shortage in the past 14 years, said Phil Kornbluth, a consultant who has been working in the helium industry for 36 years. “We started referring to this as helium shortage 3.0,” he said.

To work in any business relying on helium requires accepting that sooner or later your supplier will let you down, said Sondra Wilson of Creative Carnivals & Events in Overland Park. She quit working with balloons five years ago. “It was too unreliable,” she said.

Of course, giving up helium is not possible for everyone. Because helium gas doesn’t burn, it’s useful for rocket engines. And because liquid helium is so cold, it’s used to cool superconducting magnets used by M.R.I. scanners.

Joseph DiVerdi, a chemist at Colorado State University, relies on 60 liters of liquid helium every eight weeks for his work. “My situation is analogous to treading near the edge of a treacherous cliff,” he told Physics Today last month. 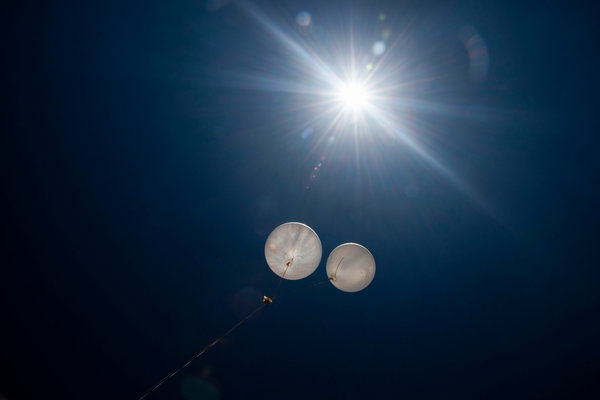 But why? Where did the helium go?

In 1958, the giant balloons in the Macy’s Thanksgiving Day Parade were filled with air instead of helium because of yet another shortage. But while this is not a new problem, helium supplies have grown particularly low lately because existing sources are dwindling and future projects have been delayed, Mr. Kornbluth said.

Part of the problem is that as delightful — and essential — as helium may be, it’s an afterthought for many international businesses. Ninety-seven percent of the world’s helium is produced as a “waste product,” collected while processing natural gas or producing liquefied natural gas, Mr. Kornbluth said. Longstanding sources of it in the United States, Qatar and elsewhere are currently running low. New natural gas projects are on the horizon. But these projects are enormous, expensive and affected largely by factors that have little to do with children’s birthday parties or even broader helium needs.

So why not stockpile helium when it’s available?

Because it’s extraordinarily expensive and difficult to store. It’s the coldest substance on the planet, and a tiny bit of heat turns it to gas. Even when kept in a cryogenic container, the liquid slowly boils off, said Samuel Burton, a field manager at the Bureau of Land Management’s helium storage facility in Amarillo, Tex.

Store it as gas and it gradually leaks out of most containers, Mr. Burton said.

But surely someone has figured out how to store it?

Yes, Mr. Burton’s employer has. In the Federal Reserve in Amarillo, helium is compressed at the surface and stored in a layer of dolomite rock more than 3,000 feet underground. Above this, a thick layer of salt keeps it in place.

“Imagine a huge layer cake with one layer able to absorb helium,” he said. Not everyone can afford such a setup.

What do Party City analysts think?

If by Party City analysts, you mean Phi Phi O’Hara of “RuPaul’s Drag Race,” she thinks it’s going to be O.K. (What are her qualifications? A single iconic line, but sometimes that goes far.) There are other places to get balloons and cheap plastic goods, she said in an interview over Instagram messenger.

“When there is no Party City to go back to, you create a new home,” she observed.

And Party City stores in most of America will not change — aside from being better able to offer helium because of a new contract with a better-positioned helium supplier.

If the helium struggles continue, maybe that’s for the best, said Ms. Wilson, the party planner. Balloon releases are horrible for the environment, and parents get overexcited about decorating even though, really, “children just want to play,” she said.