A giant star exploding and giving birth to a black hole is the most likely explanation for a mysterious stellar outburst detected in 2018, according to astronomers.

The outburst was picked up by telescopes around the world as a brilliant blue flash from the spiral arm of a galaxy, 200 million light years away from Earth.

It was faster and brighter than any previously recorded stellar outburst, and was marked down on notes as ‘AT2018cow,’ but is now simply known as ‘The Cow’.

A team from the Massachusets Institute of Technology (MIT) have since detected hundreds of millions of consistent X-ray pulses within the signal, which they say is ‘strong evidence’ in favour of it being from the explosion of a star into a black hole.

It resulted in a relatively compact black hole, smaller than 800 times the mass of the sun and no larger than 600 miles across, according to the researchers.

This opens the possibility of using ‘transient’ events, like these bright outbursts, to discover ‘baby black holes and baby neutron stars’ in the future, they explained. 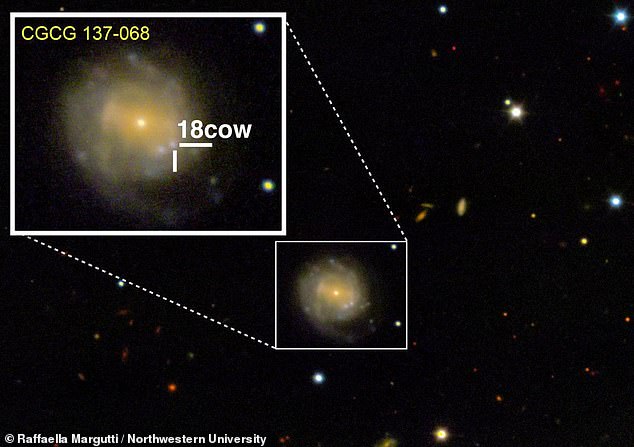 A giant star exploding and giving birth to a black hole, is the most likely explanation for a mysterious stellar outburst first detected in 2018, according to astronomers

They reach maximum brightness in under a week, take months to decline and have unusual optical features.

This makes them hard to explain within the context of the core collapse of massive stars in a supernova.

AT2018cow is an extreme example of an FBOT in terms of rapid evolution and high luminosity.

A study of X-ray pulses linked to ‘The Cow’ suggest it came from a ‘compact’ black hole or neutron star eating its originating star from the inside out.

The MIT astronomers saw a ‘strobe-like pulse’ of high energy X-rays, and hidden within this pulse were hundreds of millions of smaller pulses happening ‘like clockwork’ every 4.4 milliseconds over 60 days.

They used this data to calculate that the only viable source of such a phenomenon is an object measuring no more than about 600 miles wide, but with the mass of 800 suns – leaving only a small black hole or neutron star as the source.

A neutron star has a very small radius and very high density, made mainly of tight, closely packed neutrons and formed from the gravitational collapse of a large star in a supernova explosion that isn’t big enough to collapse into a black hole.

The new findings suggest The Cow was the product of a dying start that collapsed into either a black hole or neutron star, and continued to devour surrounding material, eating the star from the inside and releasing ‘enormous bursts of energy.’

‘We have likely discovered the birth of a compact object in a supernova,’ says lead author Dheeraj ‘DJ’ Pasham, a research scientist at MIT.

‘This happens in normal supernovae, but we haven’t seen it before because it’s such a messy process.

The ‘cow’ in the name of this phenomenon is a random coincidence of the astronomical naming process, rather than having any specific meaning.

For example ‘aaa’ refers to the very first astronomical transient discovered in 2018, a year in which multiple ‘quick bursts’ were spotted by astronomers.

However, The Cow was one of a few such signals that had been observed in real-time, and its powerful flash – up to 100 times brighter than a typical supernova – was detected by a survey in Hawaii, with follow ups around the world.

‘It was exciting because loads of data started piling up,’ Pasham says.

‘The amount of energy was orders of magnitude more than the typical core collapse supernova. And the question was, what could produce this additional source of energy?’

The outburst was picked up by telescopes around the world as a brilliant blue flash from the spiral arm of a galaxy, 200 million light years away from Earth

Neutron stars are the result of a collapsed, burnt-out dead star

Original theories for its origins, taken purely from the optical data of the observations found in 2018, included a middle-weight black hole stripping material from a passing star.

Optical telescopes couldn’t resolve the data buried within the pulse, so Pasham turned to X-ray data.

‘This signal was close and also bright in X-rays, which is what got my attention,’ Pasham explained.

‘To me, the first thing that comes to mind is, some really energetic phenomenon is going on to generate X-rays. So, I wanted to test out the idea that there is a black hole or compact object at the core of the Cow.’

It was studied in X-Ray by NASA’s Neutron Star Interior Composition Explorer (NICER), an X-ray-monitoring telescope aboard the International Space Station.

NICER started observing the Cow about five days after its initial detection by optical telescopes, monitoring the signal over the next 60 days.

Parsham and colleagues looked through the data from NICER to identify X-ray signals emanating near The Cow, and confirmed that the emissions were not from other sources such as instrument noise or cosmic background phenomena.

They focused on the X-rays and found that the Cow appeared to be giving off bursts at a frequency of 225 hertz, or once every 4.4 milliseconds.

He recognised the frequency of the pulse and said it could be used to calculate the size of what was causing it, as it couldn’t be larger than the distance that the speed of light can cover in 4.4 milliseconds.

‘The only thing that can be that small is a compact object — either a neutron star or black hole,’ Pasham says.

The team further calculated that, based on the energy emitted by The Cow, it must amount to no more than 800 solar masses. 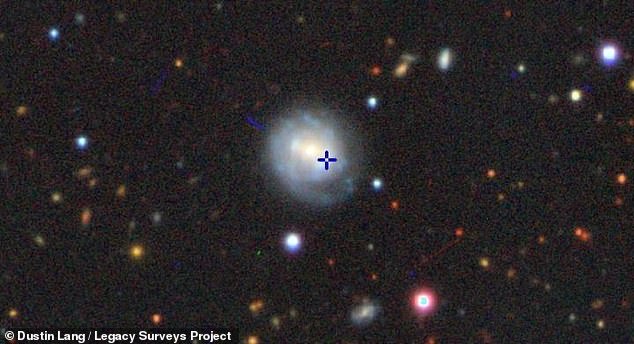 A team from the Massachusets Institute of Technology (MIT) have since detected hundreds of millions of consistent X-ray pulses within the signal, which they say is ‘strong evidence in favour of it being from the explosion of a star into a black hole

‘This rules out the idea that the signal is from an intermediate black hole,’ Pasham says.

Apart from pinning down the source for this particular signal, Pasham says the study demonstrates that X-ray analyses of FBOTs and other ultrabright phenomena could be a new tool for studying infant black holes.

‘Whenever there’s a new phenomenon, there’s excitement that it could tell something new about the universe,’ Pasham says.

‘For FBOTs, we have shown we can study their pulsations in detail, in a way that’s not possible in the optical. So, this is a new way to understand these newborn compact objects.’

The findings have been published in the journal Nature Astronomy.