The Centers for Disease Control and Prevention is investigating the death of an Oregon woman who developed a rare, but serious blood clot within two weeks of receiving Johnson & Johnson’s vaccine, the Oregon Health Authority (OHA) announced Thursday.

The woman, who was in her 50s, received her shot before US regulators paused the distribution of J&J’s vaccine last week.

The pause followed six reports of central venous sinus thrombosis (CVST), a rare blood clot that forms in the brain, among women ages 18 and 48 who had received J&J’s shot. The women similarly developed the clots within two weeks of being vaccinated. They also reported low levels of platelets — colorless blood cells that help clots form.

In a statement, the OHA said the Oregon woman had the same combination of a rare blood clot and low platelets.

Dr. Shimi Sharief, senior health advisor with the OHA, told reporters that the woman’s symptoms were consistent with that of the other blood clot cases. Symptoms for this type of clot include severe and unusual headache, shortness of breath, stroke-like symptoms, abdominal pain, and small microbleeds.

Sharief emphasized that the possible adverse reaction is very rare.

More than 8 million doses of J&J’s vaccine have been administered in the US — so cases of CVST following the shot are still fewer than one in a million. In an average year, CVST occurs in about five people out of every million.

Dr. Janet Woodcock, the Food and Drug Administration’s acting commissioner, told The New York Times that US regulators had identified more blood clot cases since the original six were reported, but the number — which she did not provide — wasn’t an “avalanche” or “big surge.” 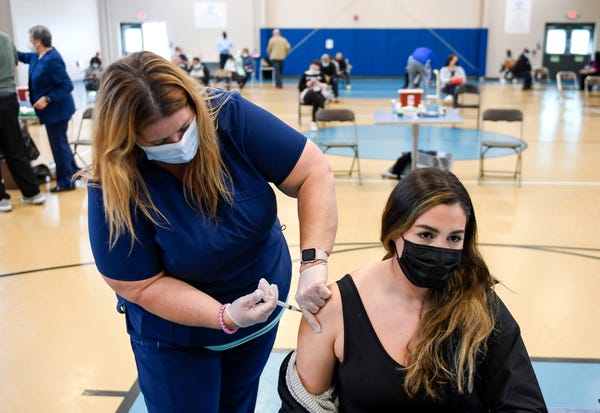 The CDC is still investigating whether the CVST cases are related to the J&J vaccine. On Friday, an independent advisory panel for the CDC will vote on whether to end the pause on the shot — 10 days after the recommendation was issued.

The death of the Oregon woman will be discussed at that meeting. The woman is the second death associated with rare blood clots following the J&J vaccine: A 45-year-old woman in Virginia also died after receiving the shot in March.

Sharief said that, to her knowledge, Oregon health authorities are not investigating any other blood clot cases in the state.

Insider recently spoke with five of the 15 CDC vaccine advisory committee members who are meeting on Friday. Barring any more major surprises in the data, they all seemed eager to get the vaccine back into syringes and arms across the nation.

“I’m not willing and eager to continue the pause for much further,” Dr. Wilbur Chen, a professor at the University of Maryland School of Medicine, told Insider. “The truth is that the value of the vaccine is proven. 100% efficacy against hospitalization and death is virtually what the data is showing, so that’s terrific. And on the other side for the safety, we think that this [clotting] is super rare.”