The bizarre mating ritual of the blue sea dragon: Footage reveals how the hermaphrodite creatures kiss before coiling their penises together and mutually fertilising each other’s eggs

At first glance at this footage, you’d be forgiven for mistaking it as a snippet from the latest science fiction blockbuster.

But the blue sea dragons shown in the video are very much real, and have been recorded during a moment of passion.

Blue sea dragons are sea slugs known scientifically as Glaucus atlanticus and are white on top and blue on their belly to camouflage in the ocean.

The unusual creatures are hermaphrodites, meaning they have both male and female genitalia.

And in the strange video, their unusual mating event can been seen in incredible detail, showing the animals intertwining penises to simultaneously fertilise one another’s eggs. 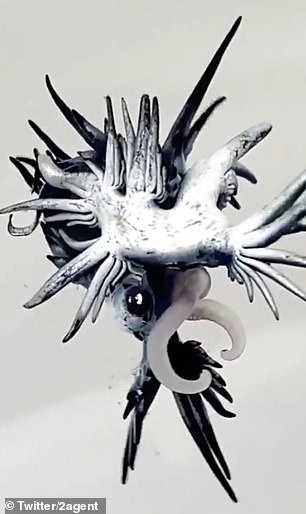 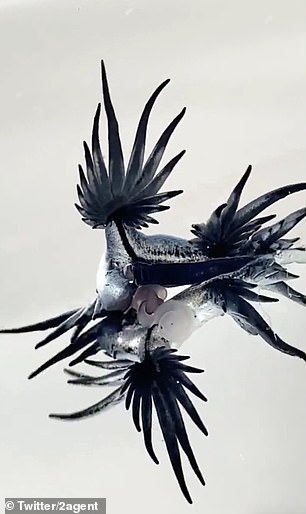 Blue sea dragons are hermaphrodites and all have penises which intertwine during mating, allowing the eggs of both individuals to get fertilised. Blue sea dragons are sea slugs known scientifically as Glaucus atlanticus and are white on top and blue on their belly to camouflage in the ocean

A video of this mating ritual was shared online by Dr Rebecca Helm, Assistant Professor of Biology at the University of North Carolina Asheville.

Writing on Twitter, she said: ‘They first kiss, then coil their penises together, holding onto each other in the open ocean via their penis bond, while mutually fertilizing one another.’

In the footage, the creatures can be seen on top of one another and as they roll around, the two tentacle penises are seen wrapping around one another.

The bizarre ritual is made more treacherous by the fact the sea slugs are immune to the highly toxic venom of the notorious man-o-war jellyfish. 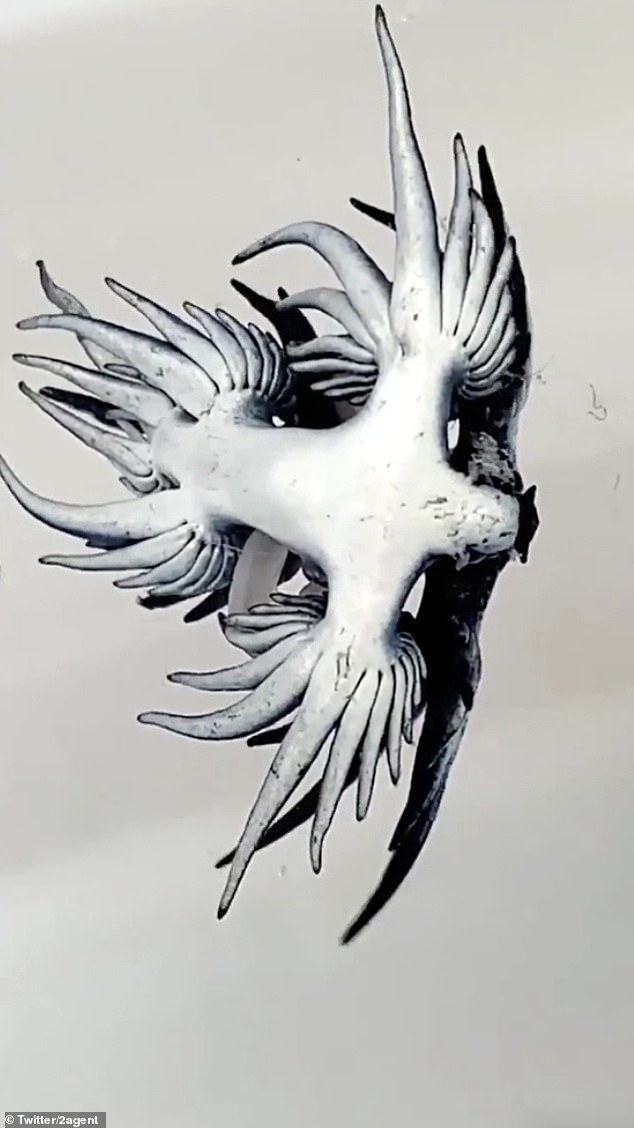 Blue sea dragons also have the ability to steal the man-o-war venom and incorporate it into themselves, making them poisonous to the touch.

As a result, Dr Helm says, the two animals avoid as much physical contact as possible while mating.

‘Glaucus can really only kiss and coil penises, any other touching will mean inadvertently stinging each other,’ she said.

‘Still, coupling can last up to an hour, each arched back to protect the other from their deadly touch.’

Once the eggs have been fertilised via the precarious coital dance, the partners separate and lay their eggs.

These eggs are on strings which contains up to 20 each and will be laid on floating pieces of wood, plastic, or anything else that is floating.

There is no gestation needed, and hundreds of the eggs can hatch within hours, according to Dr Helm. The babies live for between one month and one year, obn average.

Homosexuality in nature appears counter-intuitive but is observed in a range of species around the world.

There has yet to be an accepted explanation based on neurological, chemical or behavioural factors to explain why some animals are homosexual and some or heterosexual.

Some scientists say it may be due to exposure to testosterone levels in the womb, although this remains a hotly debated topic which has yet to be proved.

In a book titled: ‘Homosexual Behaviour in Animals: An Evolutionary Perspective’, the author, UCL professor Dr Volker Sommer, writes: ‘Within a select number of species, homosexual activity is widespread and occurs at levels that approach or sometimes even surpass heterosexual activity.’

Homosexual behaviour has been observed in many animals, including: macaques, dwarf chimpanzees, dolphins, orcas and humans.

Some studies claim homosexuality may be a common as being found in up to 95 per cent of all animal species.

There are two principle schools of thought when it comes to the prevalence of homosexuality in nature.

One theory states that homosexuality in animals doesn’t need an explanation, with animals being homosexual just as naturally as they are heterosexual.

It appears irrational for it to survive as a trait as it hinders the ability to procreate directly, but many speculate it allows individuals to ensure their genetic material is passed down the generations indirectly as they are able to look after members of their family with offspring.

For example, helping nurture the offspring of a sister.

Similar behaviour dedicated to the ‘greater good’ of a large group have been seen in various species.

For example, in familial wolf packs only one pair of animals breeds – the alpha and the beta. The other animals ensure the protection, feeding and nurturing of the litter.

This allows their genetic material to pass indirectly to the next generation through their sister, brother, mother etc or whatever the relationship may be.

The same school of though applies to animals which have exceeded their reproductive age.

For example, female elephants which are now too old to have offspring.

They still play a crucial role in the protection of the young a the matriarch leads the group to spots of food, water and chases of would-be predators.

These actions ensure the survival of the young and vulnerable members of her family, again helping ensure her genetic material is passed down through the generations indirectly.

A similar concept can be applied to homosexuality, some experts claim.

Without the ability to reproduce directly, they are able to expend energy looking after the offspring of their family members.

Another theory states that homosexual behaviours aid in the successful passing on of genes in the long-term as young animals ‘practice’ mating techniques and ways of attracting a member of the opposite sex.

It continues to be found in more species but the level of homosexuality in individual species is not well enough studied to be able to determine if homosexuality is becoming increasingly common.