B.J. Moore has a high bar when it comes to technology.

Moore worked atMicrosoft for 26 years before joining West Coast health systemProvidence St. Joseph Health as its chief information officer in January. Over the past five years, the health systemhas been turning to its high-tech neighbors for executive hires as it works to improve its operations, bringing on executives from Amazon, and Microsoft veterans like Moore.

As such, he has high expectations of what the health system — which operates 51 hospitals and made $24 billionin revenue in 2018 — can do to catch up to the digital age.

When Moore signed on, his goals were to get the lay of a land he was largely unfamiliar with, coming from a career at Microsoft. That meant visiting different Providence sites and meeting with doctors to get an understanding of their priorities.

The next step is to find ways to simplify and modernize the existing technology that the health system uses. Eventually, Moore plans to find ways to be innovative with the information the organization gathers.

Four and a half months in, Moore has made it to six of the seven states Providence operates in, and he still stands by the plan he came in with — it might just take a little longer to get past the initial steps than he anticipated.

While Moore had been told by those with healthcare industry experience that it was less advanced than the technology industry, because those folks had never worked in the tech industry they hadn’t realized just how big the gap was, he said. That gap exists across the industry where outdated technology like thefax machine are still in heavy use.

“I’m not going to pretend that after three months I’m a healthcare expert, but it is important to me to really immerse myself in the business as much as possible, make those connections, and I think that really paid off,” Moore said. “It opened my eyes to the priorities, the depth of technical debt that we have.”

As part of his tour of the hospitals in Providence’s system, Moore heard his fair share of complaints about the state of Providence’s technology.

Never miss out on healthcare news.Subscribe to Dispensed, our weekly newsletter on pharma, biotech, and healthcare. 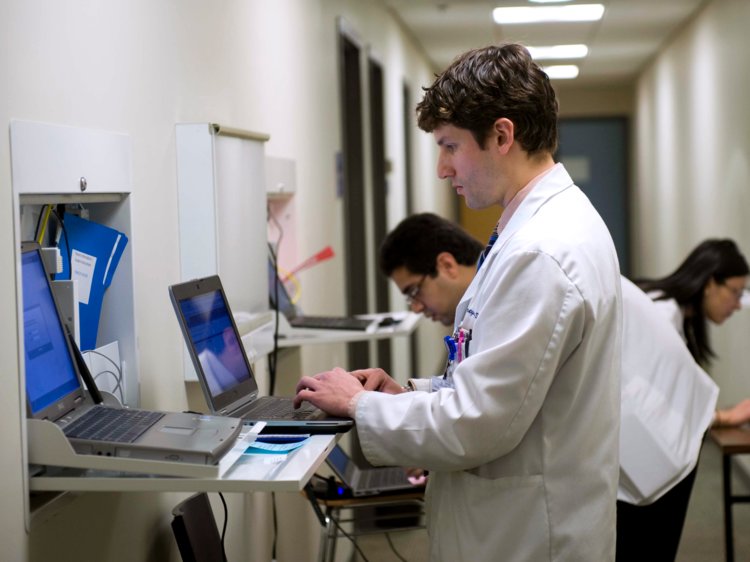 B.J. Moore has been visiting hospitals across the Providence system.Kevin Wolf/AP

Those complaints were consistent across the health system, with four main issues rising to the top.

For starters, the hospitals have a hard time getting new employees onboarded with the right permissions and logins. Moore said it usually takes a week or two to get someone the tools they need to do their jobs.

As Providence has grown by acquiring other health systems, it’s led to issues in how healthcare professionals in one legacy system can talk to their colleagues at other hospitals by video or voice messaging.

The hospitals also had difficulty with the performance of their internet networks. A program might take a second to load in the morning, but by the afternoon, it’d take 30 seconds.

And, as a result of its acquisitions, the health system has as many as 14 electronic health records systems in use across its hospitals. Moore is aiming to move to just one system —run by Epic— so that data can be shared more easily between hospitals within the system.

“Picture what the world looked like before Amazon or Microsoft or Google had their cloud services,” Moore said. “That’s what we look like. ”

Moore said he sees his health system — and the industry as a whole — as 15 to 20 years behind the tech industry.

“My bar isn’t other healthcare systems, my bar is tech companies,” Moore said.

To be sure, Moore knew what he was getting into before signing on because he’d talked through the opportunity and challenges with Providence’s chief financial officer, Venkat Bhamidipati, another Microsoft alum.

Moore said he’s still optimistic because people across the health system have been willing to work with him. For instance, the system has been on board with moving to the cloud. Before Moore started, the system had planned to build more data centers, instead. By August, Providence’s first data center is expected to be 100% migrated to the cloud, he said.

“On the negative side, we have a technical debt that’s deeper than I thought it would be,” Moore said. “But on the positive side, people’s willingness to change and embrace the future far exceeds my expectations.”

Once the basics are in place, Moore’s planning to do use the data Providence collects to work on some projects to improve the health system’s operations.

Those include using artificial intelligence to listen in on conversations between healthcare professionals and patients to then add information to the electronic health record, saving the provider time. The health system is also working on a project to better learn how to prevent sepsis, a life-threatening condition caused by infections.

Then, Moore hopes to bring in more data sources that live outside the electronic health record, such as from heart-rate monitors, fitness and sleep trackers, and other medical devices.

“The EHR is super important, but that isn’t big data,” Moore said.