‘Terrifying’ 30ft sea lizard that looked like a Komodo dragon but had teeth like a killer whale and a shark-like tail fin ruled the oceans 66 million years ago, fossils reveal

An enormous sea lizard with teeth like a killer whale was likely the apex ‘megapredator’ of the ocean 66 million years ago, fossil evidence reveals.

The Thalassotitan atrox was a mosasaur – a giant marine reptile – of the Cretaceous period that could grow up to 30 feet (9 metres) in length.

Fossils discovered by researchers at the University of Bath suggest that Thalassotitan’s skull and teeth enabled it to devour other large sea creatures.

They have even found possible remains of its victims, including large predatory fish, a sea turtle and a half-metre long plesiosaur head. 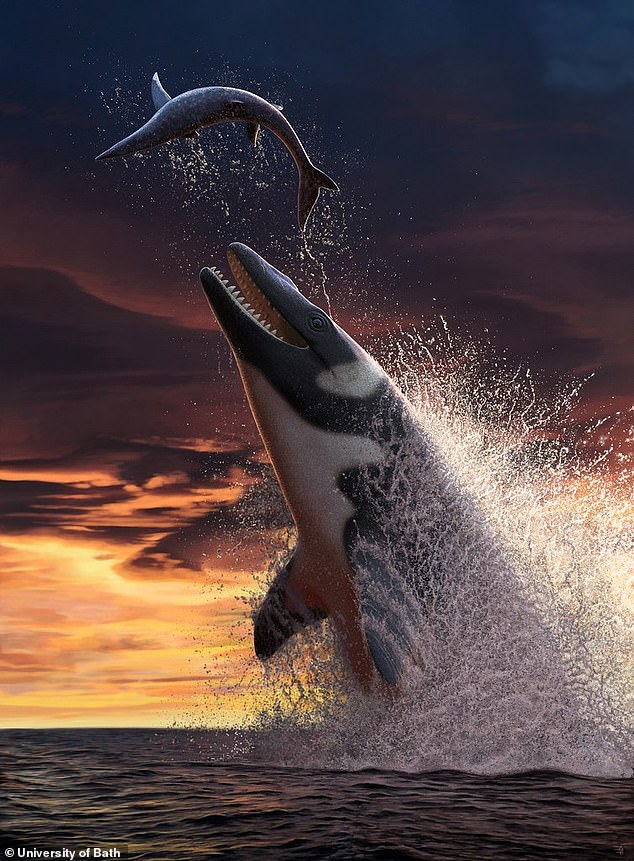 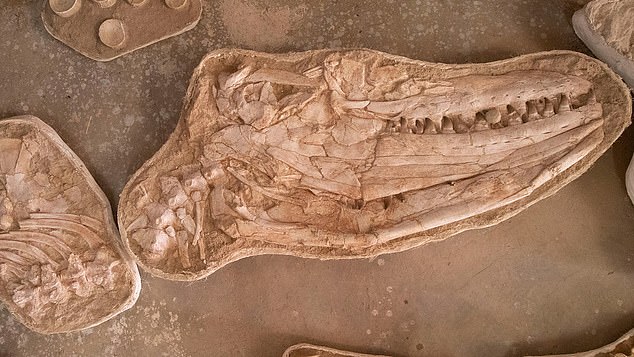 Thalassotitan had a short, wide muzzle and massive, conical teeth like those of an orca which let it seize and rip apart huge prey. Pictured: The fossilised skull of a juvenile Thalassotitan 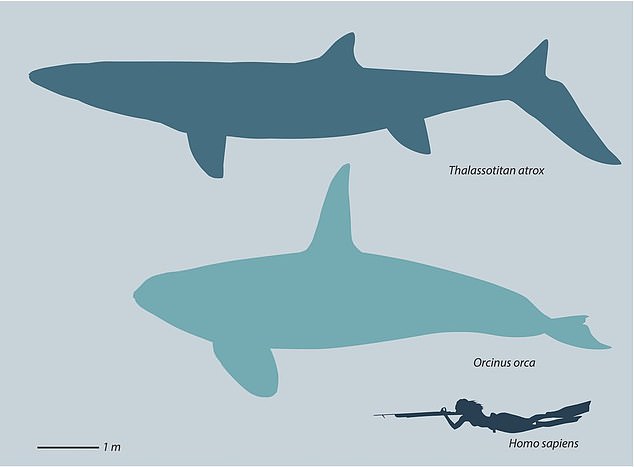 The Thalassotitan atrox was a mosasaur – a giant marine reptile – of the Cretaceous period that could grow up to 30 feet (9 metres) in length, comparable to a killer whale

Name: Thalassotitan atrox or ‘Dreadful Titan of the Sea’

Habitat: Ocean off the coast of Morocco

While dinosaurs ruled the land around 94 million years ago, the seas were dominated by the mosasaurs.

These were marine lizards that could grow up to 40 feet (12 metres) long, and are distant relatives of modern-day iguanas and monitor lizards.

The species looked like a Komodo dragon but had flippers and a shark-like tail fin, evolving into more deadly hunters in the last 25 million before extinction.

Some ate small prey like fish and squid, while others crushed ammonites and clams, but palaeontologists have discovered a new predator that enjoyed larger meals.

The remains of the Thalassotitan, meaning Dreadful Titan of the Sea, were excavated near Casablanca in Morocco.

Near the end of the Cretaceous the Atlantic flooded northern Africa, and when a wind pulled surface water to the west, nutrient-rich waters were drawn upwards.

These fed blooms of plankton, providing food for fish, which in turn fed mosasaurs and plesiosaurs.

The growth of the food chain allowed for the evolution of carnivorous megapredators like Thalassotitan that could devour other marine reptiles. 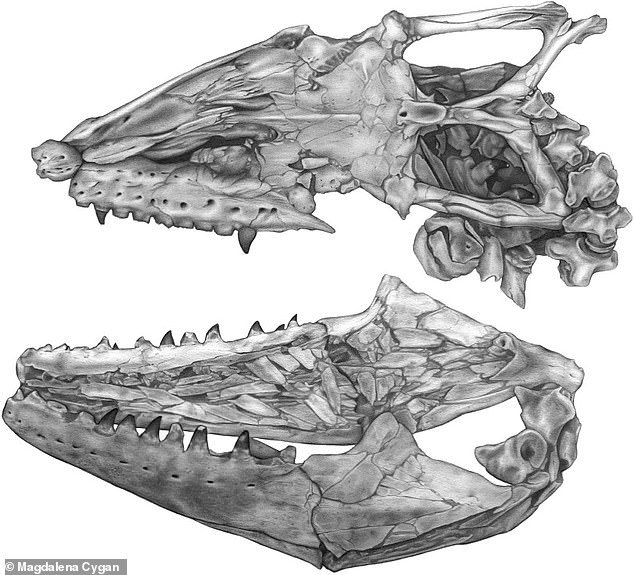 The remains of the Thalassotitan, meaning Dreadful Titan of the Sea, were excavated near Casablanca in Morocco. Pictured: Thalassotitan atrox skull and mandibles 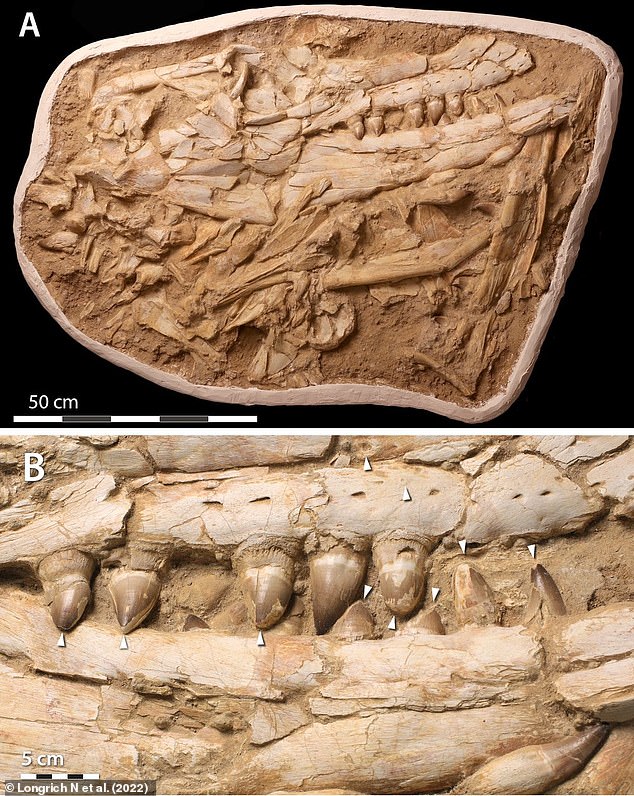 Many fossils of Thalassotitans show the teeth as broken and worn away almost to the root, which would have been the result of chomping on the bones of other marine reptiles. Pictured: Heavy tooth wear in a small Thalassotitan, shown by arrows 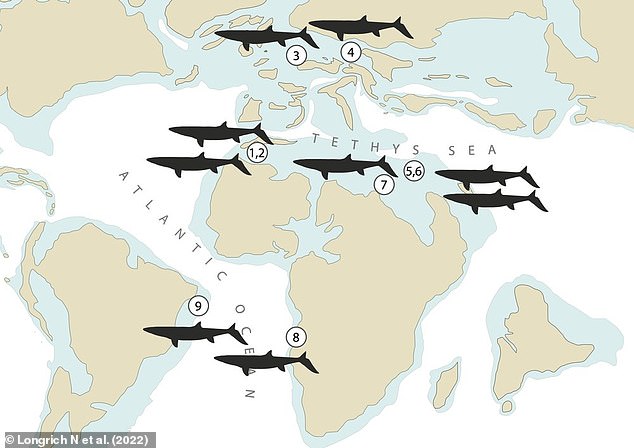 The advanced hunting capabilities of Thalassotitan are evidenced by the newly-discovered fossils, which show it had a skull measuring 5 feet (1.4 metres) long.

It had a short, wide muzzle and massive, conical teeth like those of an orca which let it seize and rip apart huge prey.

This suggests it sat at the top of the food chain, dominating the other mosasaurs which had long jaws and slender teeth for catching fish.

As further evidence, many fossils of Thalassotitans show the teeth as broken and worn away almost to the root.

This would have been the result of chomping on the bones of other marine reptiles rather than delicate fish, allowing it to hold the same ecological niche as today’s killer whales and great white sharks.

The researchers believe that some of the fossilised remains of Thalassotitan’s victims have been discovered in the same beds as the megapredator.

Large fish, a sea turtle, a half-meter long plesiosaur head and jaws and skulls of at least three different mosasaur species were found with acid erosion and their teeth and bones eaten away.

It is thought this damage could be the result of the Thalassotitan digesting the creatures in its stomach before it spat out their bones.

Dr Longrich said: ‘We can’t say for certain which species of animal ate all these other mosasaurs, but we have the bones of marine reptiles killed and eaten by a large predator.

‘And, in the same location, we find Thalassotitan, a species that fits the profile of the killer – it’s a mosasaur specialised to prey on other marine reptiles.

‘That’s probably not a coincidence.’ 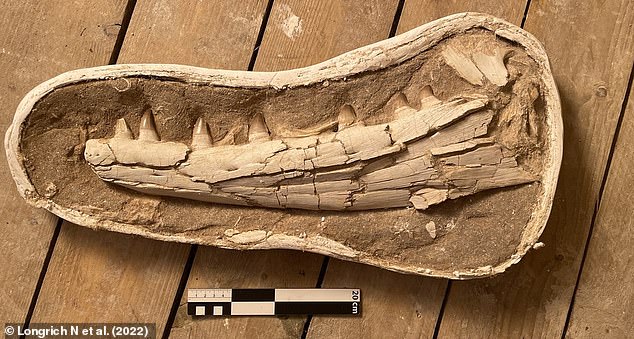 The advanced hunting capabilities of Thalassotitan are evidenced by the newly-discovered fossils, which show it had a skull measuring 5 feet (1.4 metres) long. Pictured: A juvenile Thalassotitan jaw from Sidi Chennane, showing the short, conical teeth 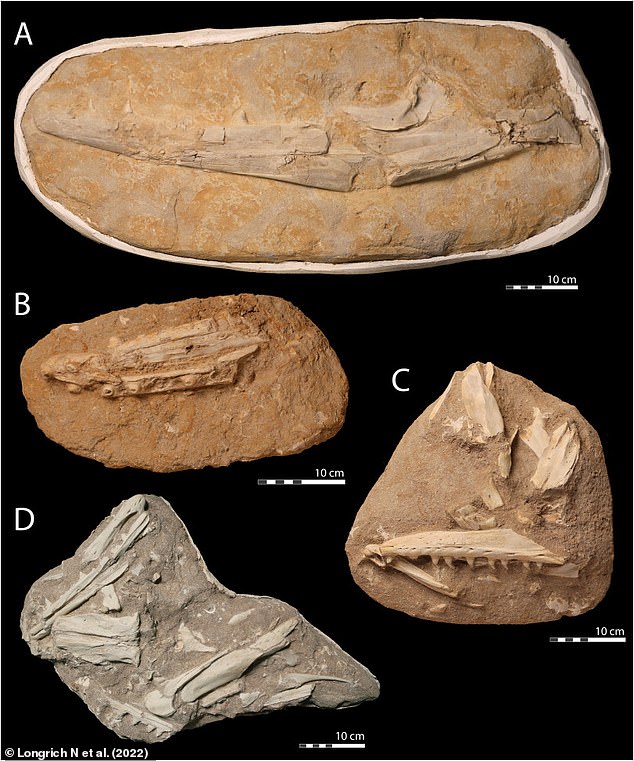 Many of the Thalassotitan fossils also bear evidence of facial injuries that could have been sustained in violent combat with others of the same species.

While other mosasaurs show similar wounds, these were exceptionally common in Thalassotitan, suggesting frequent, intense fights over feeding grounds or mates.

These fossils, along with other mosasaurs from Morocco, have been dated to the final million years of the ‘Age of Dinosaurs’.

The findings, published in Cretaceous Research, suggest that mosasaurs were flourishing before the asteroid impact that drove the Cretaceous mass extinction.

Professor Nour-Eddine Jalil, a co-author on the paper from the Museum of Natural History in Paris, said: ‘The phosphate fossils of Morocco offer an unparalleled window on the paleobiodiversity at the end of Cretaceous.

‘They tell us how life was rich and diversified just before the end of the ‘dinosaur era’, where animals had to specialise to have a place in their ecosystems.

‘Thalassotitan completes the picture by taking on the role of the megapredator at the top of the food chain.’