‘Youngest person’ to ever build a nuclear reactor: Boy wonder, 12, made a working atomic fusion experiment in his parent’s spare room using $10,000 worth of parts from eBay

A schoolboy successfully made a nuclear fusion reactor in his family’s spare room aged just 12.

Jackson Oswalt, from Memphis, now 14, is believed to be the youngest person to build a functioning nuclear fusion reactor.

The machine was built from customised vacuums, pumps and chambers bought on eBay by his parents – costing the family a total of $10,000.

His contraption smashes together atoms with enough force to fuse them into one and this process releases energy trapped inside the atoms. 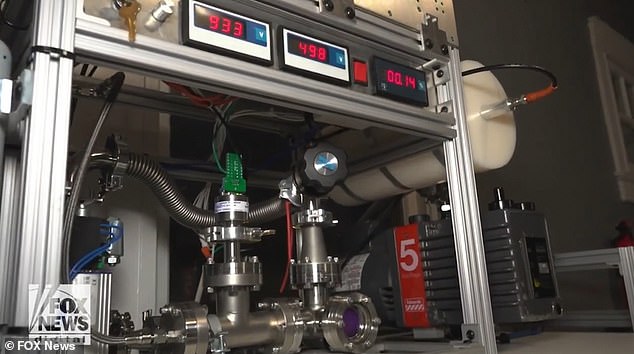 The machine (pictured) was built from customised vacuums, pumps and chambers bought on eBay by his parents. it was built using parts and expertise attained online 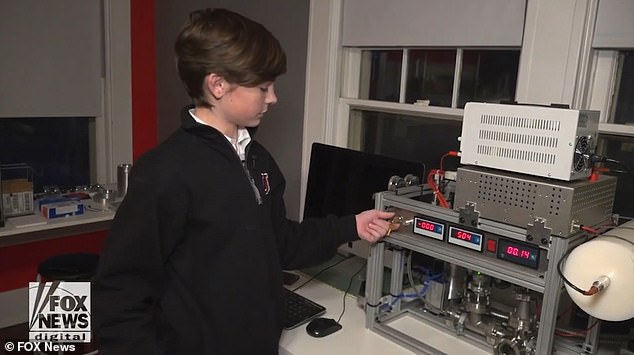 Jackson Oswalt (pictured), from Memphis, is believed to be the youngest person to build a functioning nuclear fusion reactor when he first accomplished the feat aged 12

Information on how to build the machine was found online and on January 19 last year, mere hours before his 13th birthday, nuclear fusion was successful.

The previous record for the youngest successful mastermind behind a nuclear fusion reactor was held by Taylor Wilson, who achieved it aged 14.

He told Fox News: ‘The start of the process was just learning about what other people had done with their fusion reactors.

‘After that, I assembled a list of parts I needed. [I] got those parts off eBay primarily and then often times the parts that I managed to scrounge off of eBay weren’t exactly what I needed.

‘So, I’d have to modify them to be able to do what I needed to do for my project.’

Deuterium gas – an isotope of hydrogen – is heated in a plasma core with 50,000 volts of electricity within a vacuum chamber to force the atoms together. 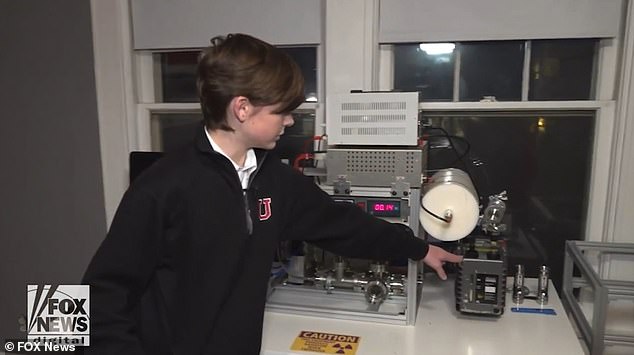 The contraption smashes together atoms with enough force to fuse them into one and create vast amounts of energy and was built in a converted bedroom. Deuterium gas – an isotope of hydrogen – is heated in a plasma core with 50,000 volts of electricity

HOW DOES A NUCLEAR FUSION REACTOR WORK?

Fusion is the process by which a gas is heated up and separated into its constituent ions and electrons.

For fusion to occur, hydrogen atoms are placed under high heat and pressure until they fuse together.

When deuterium and tritium nuclei – which can be found in hydrogen – fuse, they form a helium nucleus, a neutron and a lot of energy.

This is done by heating the fuel to temperatures in excess of 150 million°C and forming a hot plasma, a gaseous soup of subatomic particles.

Strong magnetic fields are used to keep the plasma away from the reactor’s walls, so that it doesn’t cool down and lose its energy potential.

These fields are produced by superconducting coils surrounding the vessel and by an electrical current driven through the plasma.

For energy production, plasma has to be confined for a sufficiently long period for fusion to occur.

When ions get hot enough, they can overcome their mutual repulsion and collide, fusing together.

When this happens, they release around one million times more energy than a chemical reaction and three to four times more than a conventional nuclear fission reactor.

A similar process, albeit on a far larger scale, is what powers the sun.

This enormous voltage is an energy intensive process which, Jackson admits, takes in more energy than it produces.

The commercial viability of nuclear fusion as a source of electricity remains to be accomplished as all previous attempts are also energy pits.

Jackson says this flaw is ‘why I’m not a billionaire’. 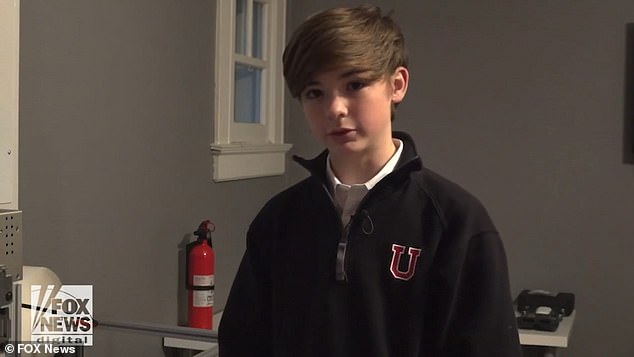 The commercial viability of nuclear fusion as a source of electricity remains to be accomplished as all previous attempts are also energy its. Jackson pictured) says this flaw is ‘why I’m not a billionaire’ 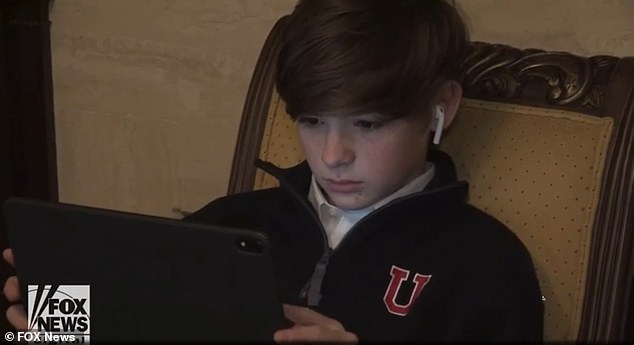 His parents funded the year-long endeavour, which they say took ‘everyday grinding’, but admit to knowing little about the undertaking. They spent up to $10,000 funding the project

The Open Source Fusor Research Consortium is an online forum for amateur physicists.

Jackson used this platform to seek advice and learn how to create his reactor.

His parents funded the year-long endeavour, which they say took ‘everyday grinding’, but admit to knowing little about the undertaking.

Jackson’s father, Chris, said he allowed his son to work on the project but ensured his safety by having experts speak to Jackson to educate him about the hazards working with radiation and thousands of volts of electricity poses.

A schoolboy from Memphis is believed to be the youngest person to ever build a nuclear fusion reactor.

He completed it when he was just 12 years old.

Jackson Oswalt built the machine from customised vacuums, pumps and chambers bought on eBay by his parents.

Jamie Edwards from Preston was 13 when he built his own nuclear reactor back in 2014.

He said he was inspired after stumbling across videos of the original boy genius – Taylor Wilson.

He was funded in his endeavour with a £3,000 budget from his headteacher.

Taylor Wilson found widespread fame when he built his own nuclear reactor aged 14 in 2008.

The machine was capable of smashing atoms in a plasma core at over 500 million degrees Fahrenheit—40 times hotter than the core of the sun—in his parents’ garage.

He then won a $50,000 prize at a science fair for creating an an anti-terrorism device.

He then skipped college after receiving a $100,000 Thiel Fellowship and has done two TEDTalks.

Before the successes of these geniuses was David Hahn, known as the ‘Radioactive Boy Scout’

He built a nuclear reactor in his potting shed and shut down a neighbourhood of 40,000 in 1996.

In a bid for a Boy Scout merit badge, David took to his mother’s potting shed and built a breeder reactor. It became so irradiated a neighbour claimed to have seen it glow.

It was immediately sealed up and the Environmental Protection Agency was called in.

On a June morning in 1996 moon-suit wearing EPA agents dismantled the potting-shed, sealed it up with David’s other materials, shipped then to Utah and buried them in the desert.