Rescue operations are underway to dislodge the Ever Given, which has blocked the Suez Canal since Tuesday, March 23. The 200,000-ton cargo ship got trapped on the canal’s banks likely as a result of human error, the Suez Canal Authority said on the weekend. But hopes are high the ship could soon be on the move after canal services company Leth Agencies said the ship was “partially refloated”.

The Ever Given’s stern had been moved by more than 300ft from the shoreline, and its course has been corrected by about 80 percent.

Although still not in the green, efforts to fully refloat the ship will resume on Monday when the tide comes in.

It is estimated the backlog caused by Ever Given’s predicament is holding up more than £7billion ($9.6billion) worth of cargo each day.

Ships that rely on the Suez Canal for access to Europe and Asia have been forced to detour around Africa – a far longer and more costly route. 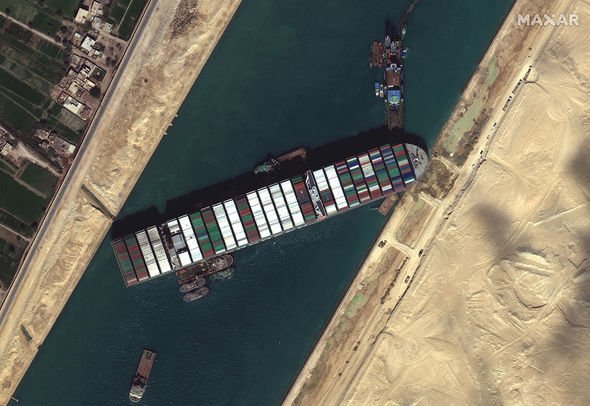 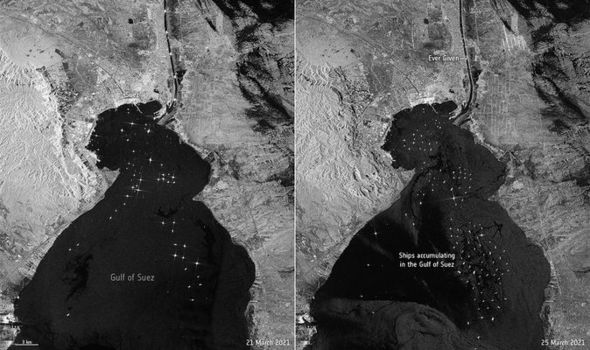 Ships have also been accumulating in the Gulf of Suez, which runs into the Red Sea in the south.

Satellite images taken by the European Space Agency’s Copernicus Sentinel-1 mission show the stark difference in ship traffic before and after the Ever Given got stuck.

The photo on the left shows a steady flow of ships in the Gulf of Suez just two days before Ever Given entered the narrow canal.

The specks of white – the ships – are spaced about two to three kilometres apart.

The 1,312ft-long (400m) Ever Given ran aground while on a trip from China to the Netherlands.

The Suez Canal runs through the city of Suez on the Red Sea and connects north to Port Said on the Mediterranean. 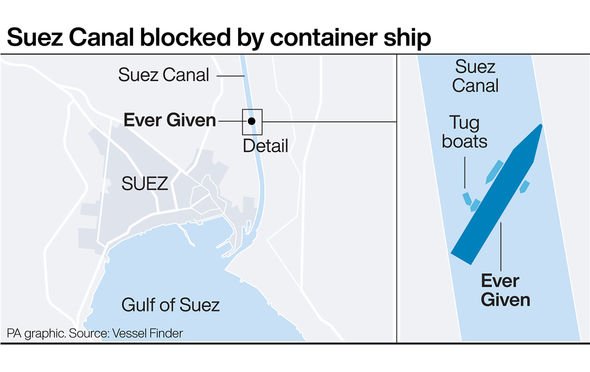 ESA said: “The blockage has delayed hundreds of tankers and vessels in reaching their destination, and more maritime traffic is still heading to the crucial waterway.”

You can see dozens of ships accumulating in the Gulf of Suez, unable to sail through.

“The sea surface reflects the radar signal away from the satellite, and makes water appear dark in the image.

DON’T MISS…
Jeremy Clarkson quips co-star is ‘responsible’ for Suez Canal crisis [REPORT]
Suez Canal: 220,000-ton ship moves with ‘errors’ blamed for jam [INSIGHT]
How wide is the Suez Canal in miles and how long is it? [ANALYSIS] 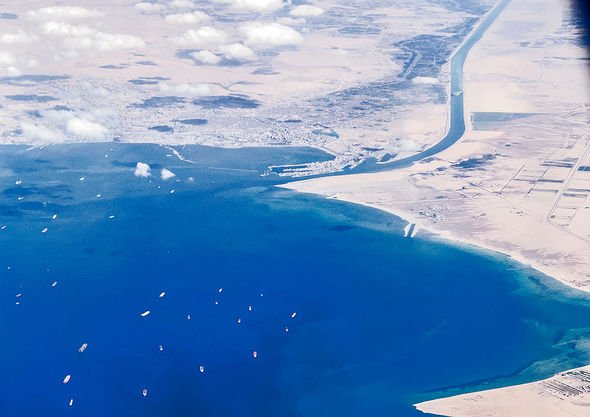 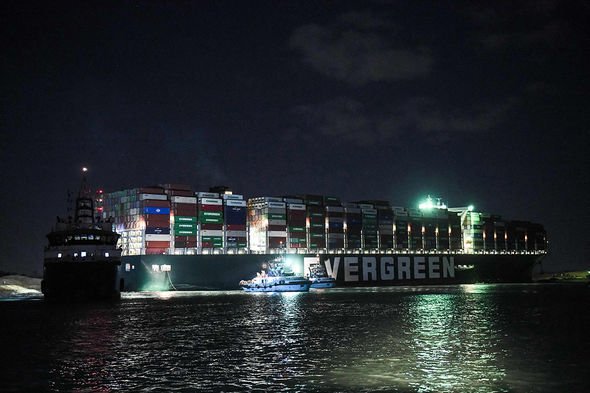 “This contrasts with metal objects, in this case the ships in the bay, which appear as bright dots in the dark waters.”

Once the ship is dislodged and cleared from the canal’s banks it will be moved to a waiting area.

The rescue operations are being carried out by the Dutch company Smit Salvage.

Tug boats and diggers are being used to straighten out the Ever Given’s course.

Efforts are expected to resume today at 10.30am GMT when the tide comes in.

According to the Suez Canal Authority, more than 360 vessels are presently waiting to get through.

The Suez Canal is one of the world’s busiest trades routes, accounting for about 12 percent of global trade.

It is the only route that connects European waters with the Arabian Sea and the Indian Ocean.

The Suez Canal drastically cuts down on travel times and distances, as a cargo ship setting off from Italy through the 120-mile canal can reach India in just nine days.

An alternative route around Africa would take about three weeks to complete.