A study that claimed drinking alcohol is bad for men trying for a baby actually found that alcohol can help, research claims.

Last week, scientists from Central South University in Hunan, China, published the study claiming that men should abstain from alcohol for six months.

The research stated that men who drank put the infant at greater risk of congenital heart defect (CHD) – a condition that encompasses a number of different diseases affecting heart function.

But today, a new report casts doubts on the study’s findings and argues the data shows that fathers who drank 3.5 drinks a day actually had a lower risk of fathering children with CHD compared to non-drinkers. 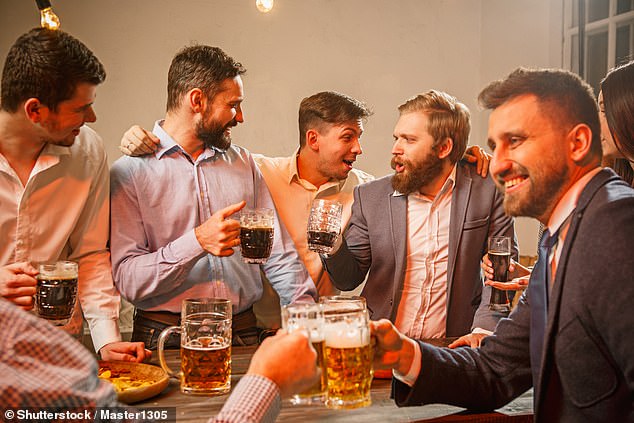 Having one or two drinks of alcohol a day likely has no significant effect on whether a man will father a child with congenital heart defect, contrary to the claims of a recent study.

An investigation from ArsTechnica looked at data underlying the report, which was an analysis of 55 previously published studies looking at links between parental behavior and CHD in babies.

It turns out that the six-month figure didn’t actually come from data, but a statement the study’s lead author made in a press release the university sent out to announce the study’s publication.

The meta-analysis only collected data from studies that looked at paternal drinking for up to three months before conception, not six.

This chart from the study shows risk levels associated with grams of alcohol consumption. 100 grams is the equivalent of 3.5 drinks a day, which the chart shows has a lower risk than what was observed among non-drinking fathers.

WHAT IS CONGENITAL HEART DISEASE?

Congenital heart disease is a general term for a range of birth defects that are present at birth.

The most common heart defects include:

Septal defects: When there’s a hole between two of the heart’s chambers, which is known commonly as a ‘hole in the heart’.

Coarctation of the aorta: Where the main large artery of the body, is narrower than normal

Pulmonary valve stenosis: When the pulmonary valve is narrower than the normal. This valce controls the flow of blood from the heart to the lungs.

Transposition of the great arteries: When the pulmonary and aortic valves and the arteries they’re connected to have swapped positions.

The authors themselves noted that they had found a statistically significant increase in only one very rare subset of CHD, which was attributed to maternal drinking, not paternal drinking.

The authors wrote that they ‘did not find a statistically significant association between parental alcohol exposure and the remaining phenotypes of CHDs because of the limited number of included studies for specific phenotypes.’

As noted, fathers who didn’t drink at all seemed to be at higher risk for children with CHD than those who drank moderately.

Greater risk of CHD among drinking fathers compared to non-drinkers didn’t start to appear until seven drinks or more a day.

In the past, studies that have attempted to draw a similar connection between intoxicants and birth defects have been proven unreliable.

Famously, a study of 23 babies from the 1980s inaugurated the belief that mothers who used crack during pregnancy greatly increased the likelihood of birth defects.

A later longitudinal study found that it was poverty in general and not crack-use specifically that caused birth defects.