Researchers say at least 180 hand and footprints line the clay-rich floor of Italy’s cave of Bàsura in the famous Toirano caves, indicating ancient humans crawled barelegged through low tunnels as they searched for food and even explored for fun.

The group that left behind these tracks thousands of years ago included a total of five individuals, from adults to children as young as 3 years old, who navigated the dark pathways using wooden sticks as torches.

According to the team behind the new study, this is the first time crawling behavior during this period has been identified.

‘In our study, we wanted to see how ancient humans explored this fascinating cave system,’ said first author Marco Romano, Postdoctoral Fellow at the University of the Witwatersrand, South Africa.

‘Specifically, we set out to discover how many people entered the cave, whether they explored as individuals or as a group, their age, gender, and what kind of route they took once inside the cave.’

‘Together, these approaches allowed us to construct a narrative of how the humans entered and exited the cave, and their activities once they were inside,’ Romano said.

The structure of the prints suggests there were five individuals navigating the cave: two adults, an adolescent roughly 11 years old, and two children, aged 3 and 6. 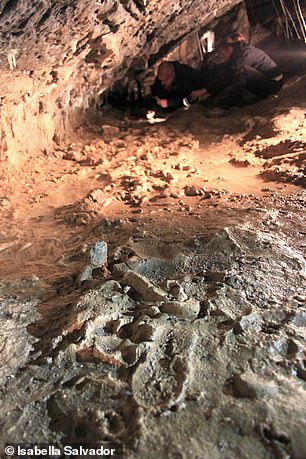 According to the team behind the new study, this is the first time crawling behavior during this period has been identified

According to the researchers, these excursions weren’t just done in the name of survival; the Stone Age groups may have held social activities within the cave walls.

This is made apparent by differences in the style of the handprints, some of which appear more ‘intentional’ than others.

‘Hunter-gatherers may therefore have been driven by fun activities during exploration, as well as simply the need to find food,’ Romano said.

‘Together, our results show how a varied approach to studying our ancestors’ tracks can provide detailed insights on their behavior,’ said senior author Marco Avanzini, head of the geology department at MUSE—Trento Museum of Science, Italy.

‘We hope our approach will be useful for painting similar pictures of how humans behaved in other parts of the world and during different periods of time.’ 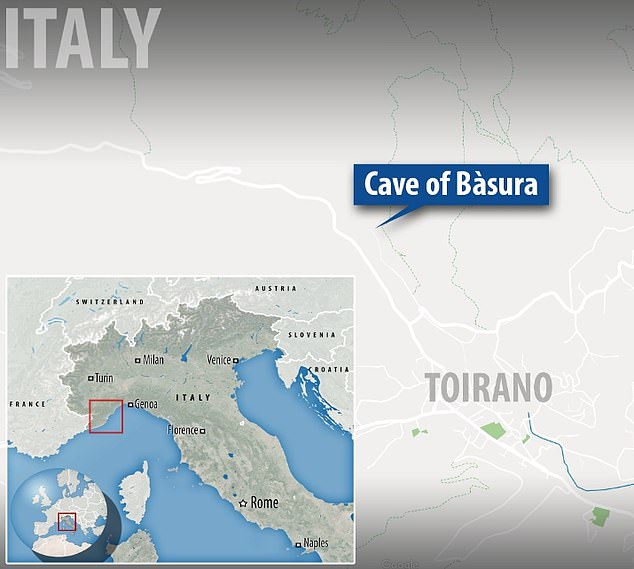 WHAT DO WE KNOW ABOUT THE HISTORY OF THE STONE AGE?

The stone age is a period in human prehistory distinguished by the original development of stone tools that covers more than 95 per cent of human technological prehistory.

It begins with the earliest known use of stone tools by hominins, ancient ancestors to humans, during the Old Stone Age – beginning around 3.3 million years ago.

Between roughly 400,000 and 200,000 years ago, the pace of innovation in stone technology began to accelerate very slightly, a period known as the Middle Stone Age.

By the beginning of this time, handaxes were made with exquisite craftsmanship. This eventually gave way to smaller, more diverse toolkits, with an emphasis on flake tools rather than larger core tools.

The stone age is a period in human prehistory distinguished by the original development of stone tools that covers more than 95 per cent of human technological prehistory. This image shows neolithic jadeitite axes from the Museum of Toulouse

During the Later Stone Age the pace of innovations rose and the level of craftsmanship increased.

Groups of Homo sapiens experimented with diverse raw materials, including bone, ivory, and antler, as well as stone.

The period, between 50,000 and 39,000 years ago, is also associated with the advent of modern human behaviour in Africa.

Different groups sought their own distinct cultural identity and adopted their own ways of making things.

Later Stone Age peoples and their technologies spread out of Africa over the next several thousand years.