Spiders that hunt in packs can bring down prey more than 22 TIMES their size but are more likely to remain small, study shows

Spiders that hunt in packs can bring down prey more than 22 times their size, while solitary arachnids only tend to target insects half as big as themselves, research shows.

Tiny tangle-web social spiders known as Anelosimus eximius live in their thousands in webs up to 25-foot long, suspended in the trees of the South American rainforest.

Known for eating larger prey, they can take on insects as large as the four-and-a-half-inch giant grasshopper, swarming over it before it can escape.

It is one of 33 species studied by researchers at the University of Portsmouth that convinced them ‘social’ spiders are more likely to stay small.

They found that while the group-living arachnids targeted prey two-and-a-half times their size on average, solitary spiders preferred to eat creatures around half their size. 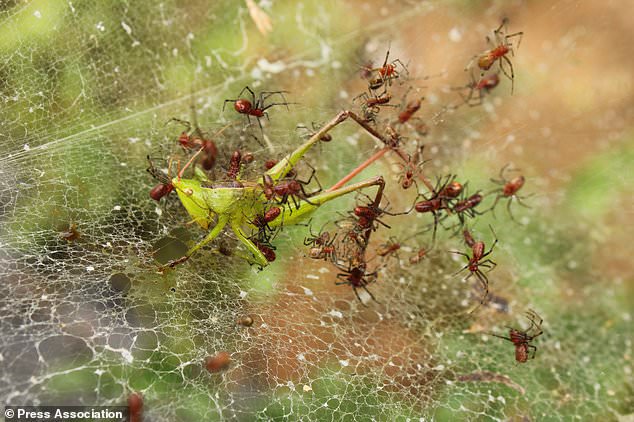 Social spiders were able to eat prey that was, on average, two-and-a-half times larger than themselves, researchers at the University of Portsmouth found 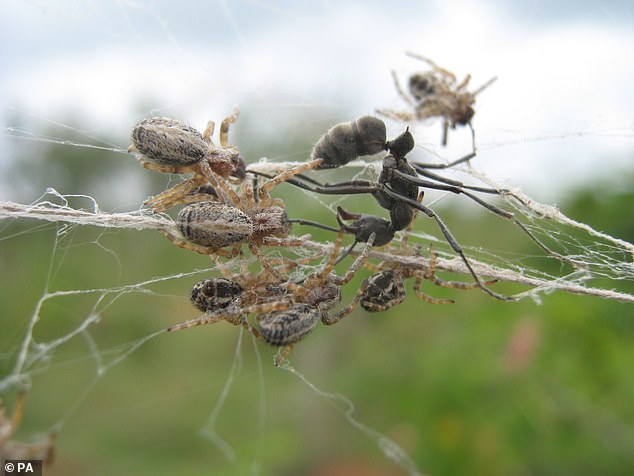 However, solitary spiders preferred to target prey roughly half their size. Pictured above are velvet spiders, Stegodyphus, catching an ant

The researchers made the discovery by comparing the ratio of each species body size by the average size of their prey.

Eight species of velvet spiders, genus Stegodyphus, found in Africa, Israel and India were examined alongside 25 species, genus Anelosimus, from the Americas.

Spiders in the Anelosimus group varied from 0.07 to 0.2 inches, while those in Stegodyphus varied from 0.3 to 0.9 inches, with the social spiders tending to be much smaller.

Senior lecturer in Zoology, Lena Grinsted, said her findings suggest that working together lessens the need for spiders to grow big.

‘Our argument is that when these spiders start co-operating in catching prey, they can still catch the same really large prey, even if they start to mature at a smaller body size,’ she said.

‘And a smaller body size carries with it multiple overall fitness benefits when you live in a crowded group.’ 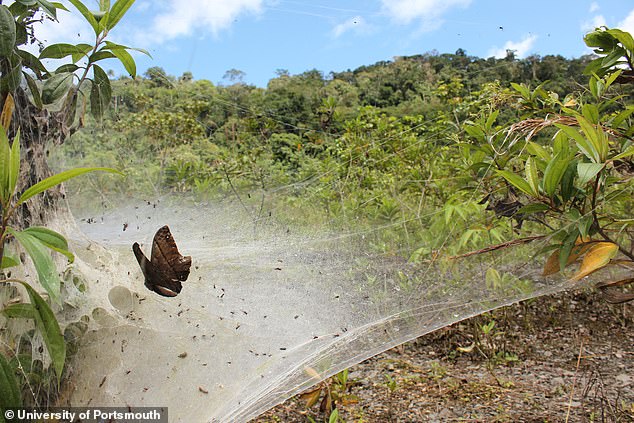 What spiders were studied?

As many as 33 different species were examined for this University of Portsmouth study.

Eight were from the Stegodyphus genus, measuring between 0.3 to 0.9 inches.

And a further 25 were from the Anelosimus genus, measuring between 0.07 to 0.2 inches.

She added that death rates are reduced in social species as they build large, more-protective, nest structures and do not need to risk travelling to find a mate.

She dubbed her theory the ‘prey to predator size ratio hypothesis’.

‘When spiders evolve the ability to catch prey co-operatively, we see a beneficial increase in the prey:predator body-size ratio,’ she said.

‘This increase can be achieved either by catching larger prey, as the classic theory suggests, or by evolving a smaller predator body size, as we see has happened in some social spiders.’