A special effects and technology company in San Francisco is pitching a surprisingly lifelike animatronic dolphin to aquariums and marine parks in China to help them deal with the country’s recent ban on wildlife trade.

The dolphin was developed by Edge Innovations, a company founded by special effects veteran Walt Conti, who previously worked on The Abyss, Anaconda, Deep Blue Sea, The Perfect Storm, among many others.

The current prototype was modeled after an adolescent bottlenose dolphin, weighs around 595 pounds, and can swim for 10 continuous hours on a single battery charge. 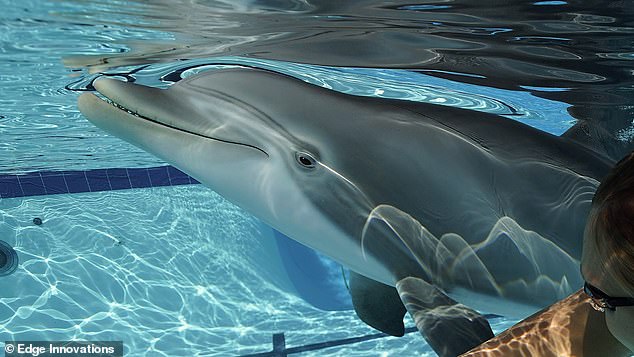 The dolphin was designed to mimic the skeletal structure of a real dolphin, and uses internal bladders and weight deposits to further match a real dolphin’s swimming movements – and its teeth have been given a light yellow staining for extra realism.

The dolphin requires a human operator to swim and can’t operate autonomously, according to a report in Gizmodo..

It can also make certain animatronic gestures to interact with guests, including making squeaking noises and vigorously shaking its head back and forth.

Edge Innovations initially developed the dolphin prototype as an educational tool, but following China’s ban in February of all wildlife trade, a new business opportunity emerged.

Edge is currently pitching the animatronic dolphin to several unnamed Chinese aquariums and believes it could be sell as many as 150 units over the next three years.

The company estimates the price range for a dolphin will be between $40million and $60million, depending on the desired features. The animatronic dolphin weighs 595 pounds and requires a human operator to control it via remote control. It can squeak and nod its head to perform a variety of realistic gestures

While expensive, Edge Innovation’s Li Wang believes the dolphins would lead to substantial savings in upkeep and medical costs for real dolphins and could pay for themselves in a matter of years.

‘In terms of a 10-year business operating period and a two million annual visitor capacity, the overall investment and maintenance costs for a decent animatronics entertainment portfolio only accounts for about one quarter or no more than one-third of what a traditional aquarium spends,’ Wang told the South China Morning Post.

Without any maintenance, Edge promises the dolphin can last for more than 10 years in salt water and even longer in fresh water. 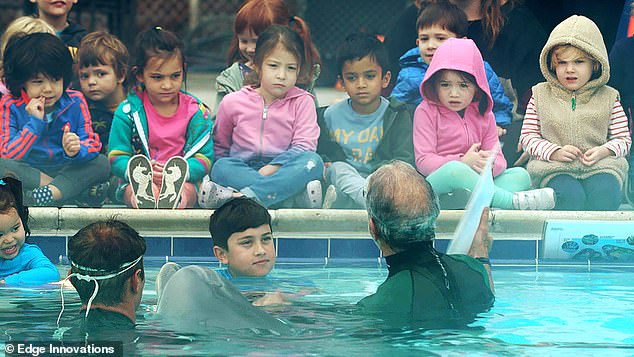 Though the animatronic dolphins cost between $40million and $60million each, Edge says the savings in food and medical care will ensure they pay for themselves in a mater of years

In February, China banned the trade of wild animals as part of a major overhaul in policy following the global COVID-19 outbreak.

The ban prohibits the consumption of wild animals in wet markets where the COVID-19 virus is believed to have originated, but it also includes the international trade of wild animals that many marine and wildlife parks rely on to acquire new animals.

The wildlife trade reportedly generated more than $74billion a year and employed more than 14million people in the country before the ban.