The self-guided, 16-story-tall silver bullet-shaped rocket conducted what appeared from SpaceX’s live stream to be a flawless liftoff.

Then, after reaching its peak altitude of approximately 6 miles (10km), the spacecraft then hovered momentarily in midair, shut off its engines and executed a planned “belly-flop” manoeuvre.

Starship SN9 then descended nose-down under aerodynamic control back towards terra firma.

After flipping its nose upward again to initiate its landing sequence, SapceX Starship tried to reactivate two of its three Raptor thrusters, with one failing to ignite. 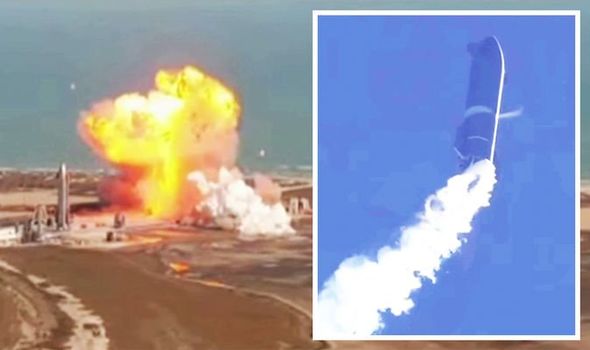 Starship then plummeted helplessly to Earth exploding in a mini mushroom cloud, exactly 6 minutes and 26 seconds after launch.

This is the second successive failed landing, after the previous iteration, SN8, launched and also failed to stick the landing late last year.

And the backdrop to yesterday’s experimental launch demonstration has only added to the dramas.

The SN9 launch followed weeks of tension between SpaceX and the Federal Aviation Administration (FAA).