Nailed it! SpaceX launches and LANDS its Starship SN15 that is the first rocket to survive the its high altitude test

SpaceX has successfully launched and landed its Starship Serial Number 15 rocket – the only prototype to survive a high altitude flight test.

The Elon Musk-owned company launched SN15around 6:15pm ET, following a day of delays and anticipation, from its testing facility in Boca Chica, Texas.

SN15 ignited its three massive Raptor Engines that released out streams of white smoke from the base before fire blew out to shoot the rocket into the air.

The prototype climbed through the sky until it reached six miles, where it hovered for a moment and then it perform the infamous sideways flip, dubbed a ‘belly flop’ maneuver by CEO Elon Musk.

‘Starship landing nominal,’ Musk tweet moments after his pride and joy made a safe and successful landing on the pad. 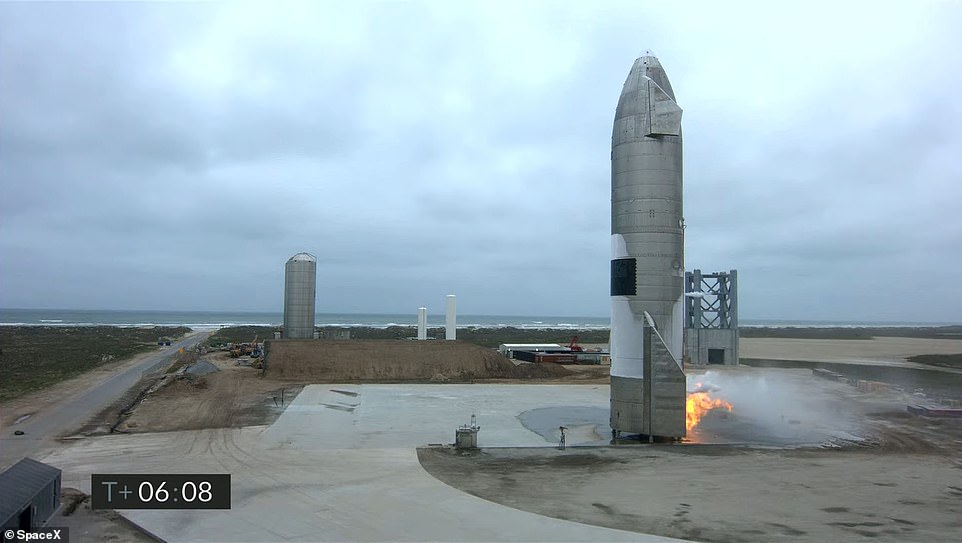 SN15 is the first Starship prototype that was not blown to pieces after a high-altitude test- although a fire sparked at the base after it touched down, but it was quickly contained.

Musk has had his eye on the skies all week and had two previous scrubs of the mission, but he appeared to have luck on his side come Thursday.

After hitting the six-mile mark, the rocket hovered in place for a few seconds using just a single rocket and performed a controlled aerodynamic descent.

This mimics the technique Starship will use when returning through Earth’s atmosphere from space – presenting the ‘belly’ as it enters the atmosphere reduces the speed of descent as it approaches the ground. 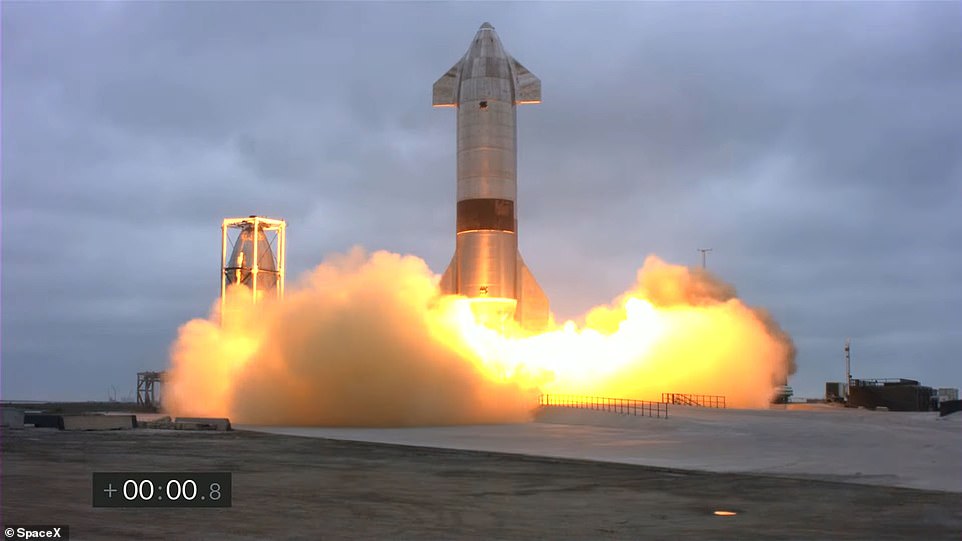 SN15 ignited its three massive Raptor Engines that shot out streams of white smoke from the base before fire blew out to shoot the rocket into the air.

SN15’s Raptor engines reignited as the vehicle attempted a landing flip maneuver immediately before touching down on the landing pad adjacent to the launch mount, shut down its Raptor Engines and stood tall on the pad.

Musk aims to use Starship testing to finalize the final rockets to take humans to Mars, however his company has yet to see one survive the first test flight on Earth.

The most recent test flight, on March 31, ended with SN 11 in pieces on the launch pad.

Fog covered the massive rocket as it stood tall on the launch pad, only revealing itself when it ignited its three Raptor engines that sent streams of fire flowing out from the base.

SN11 took off, soaring above the testing facility as it attempted to reach a goal of six miles into the sky.

However, 2.5 minutes into its flight, SpaceX’s livestream froze – leaving the ground team and world in the dark. 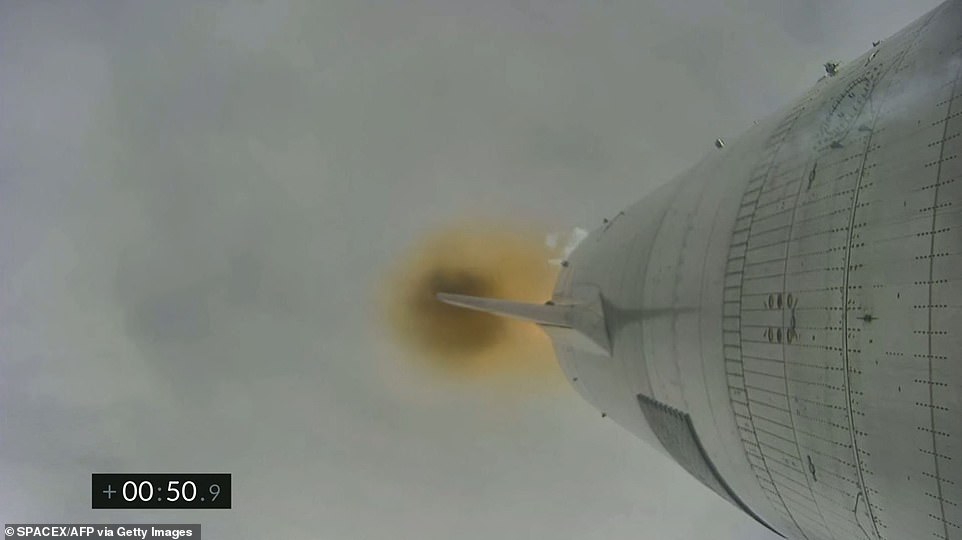 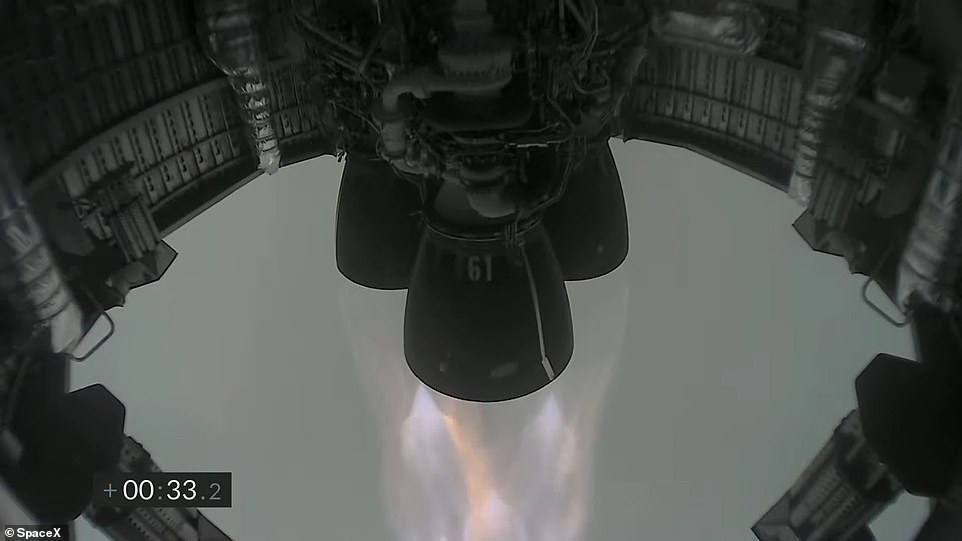 Moments later, a loud boom was heard, the sky lit up around the launch pad and debris started falling from the sky.

One bystander found a piece of the charred rocket about five miles outside.

SpaceX engineer John Insprucker, who hosted the livestream, said: ‘Starship 11 is not coming back, don’t wait for the landing.’

‘We do appear to have lost all the data from the vehicle.’

Musk later revealed on Twitter that ‘a (relatively) small’ methane leak led to its demise, which was what caused SN10 to explode weeks earlier. 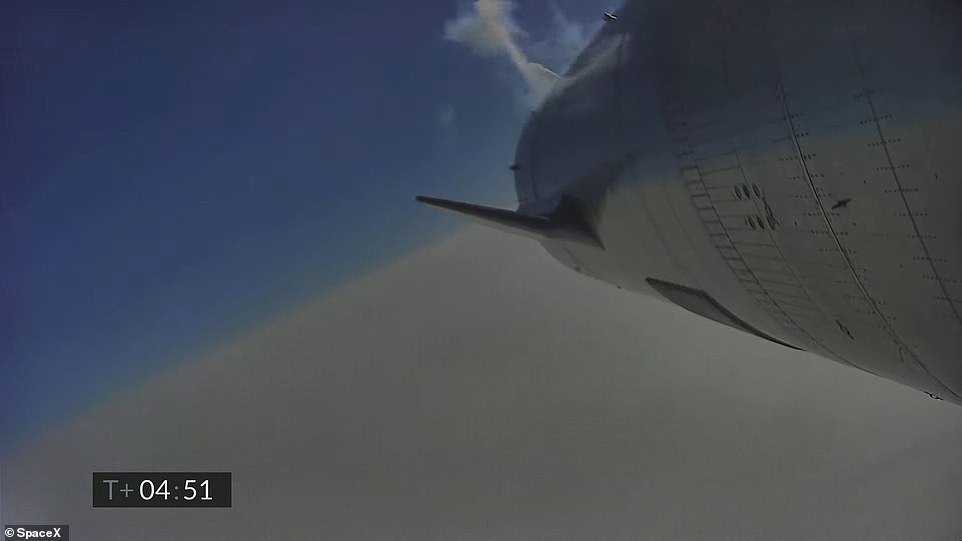 SN15’s Raptor engines reignited as the vehicle attempted a landing flip maneuver immediately before touching down on the landing pad adjacent to the launch mount, shut down its Raptor Engines and stood tall on the pad. Musk aims to use Starship testing to finalize the final rockets to take humans to Mars, however his company has yet to see one survive the first test flight on Earth (pictured is an image of the rocket performing the flip maneuver) 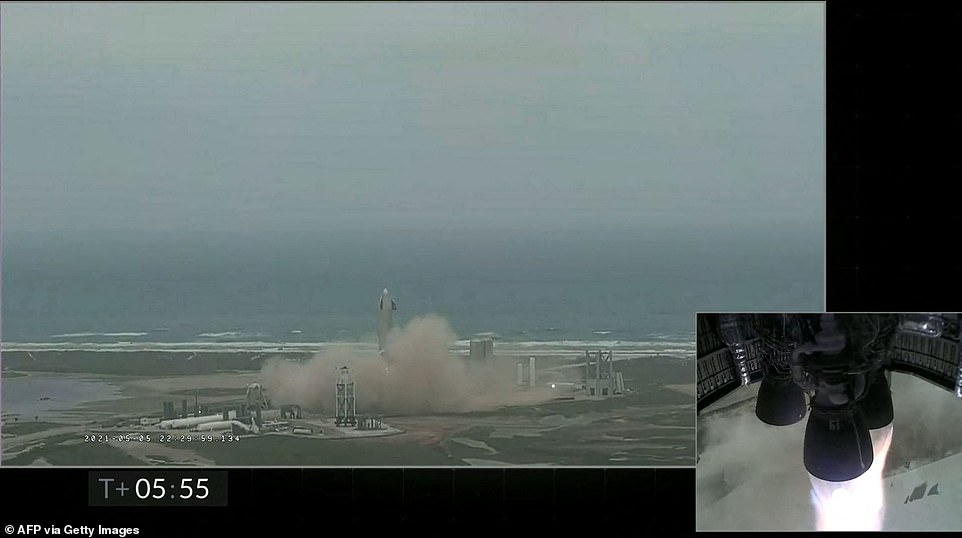 Musk announced on Twitter a few hours after SN11 exploded that ‘SN15 rolls to launch pad in a few days. It has hundreds of design improvements across structures, avionics/software & engine. Hopefully, one of those improvements covers this problem. If not, then retrofit will add a few more days.’

The reason the prototype has jumped from 11 to 15 is due to SpaceX’s rapid advances in design upgrades – SN12 through SN14 were scrapped due to being obsolete.

SN10 was the first out of the four previous Starships to survive the landing, but the massive rocket exploded roughly 10 minutes after due to a methane leak.

And both SN8 and SN9 exploded into a ball of flames the moment they touched down.

The Starship is constructed of stainless steel, which stands 160 feet tall, and is fitted with a nose cone and flaps at the side.

Each rocket that has launch was tasked with collecting data throughout the flight to better improve the next.