The rise of low-cost space transportation is increasing the amount of engine exhaust pollution in Earth’s atmosphere, a new study has warned.

This is because the rocket engines’ exhaust gases linger in the sky, creating significant heating and compositional changes in the atmosphere.

The researchers found that the amount of carbon dioxide emitted by a rocket as it climbs 1 kilometre (0.6 miles) in altitude is equivalent to that contained in 26 cubic kilometres of atmospheric air at the same altitude.

Meanwhile, the thermal nitrogen oxides (NOx) produced as the rocket climbs to an altitude of 10 kilometres, could reach a concentration level as to be hazardous to human health. 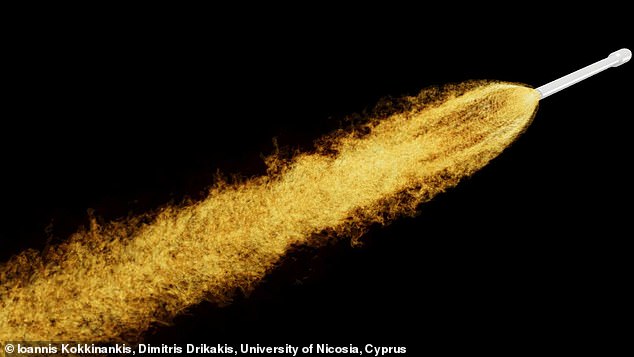 The rise of low-cost space transportation led by SpaceX, Virgin Galactic and Blue Origin is increasing the amount of engine exhaust pollution in Earth’s atmosphere, a study has warned

LAYERS OF THE ATMOSPHERE

Troposphere is where humans live and weather exists, the lowest layer stretching up to about six miles.

Stratosphere extends up to about 40 miles and contains much of the ozone in the atmosphere.

Mesosphere sits just above the stratosphere where temperature decreases with height, reaching -130F.

Thermosphere is where temperatures begin to increase with height, caused by the absorption of UV and X-rays.

Exosphere starts at 310 miles and contains oxygen and hydrogen atoms, but in very low numbers.

Magnetosphere features charged particles along magnetic field lines in two bands at 1,800 and 10,000 miles above the surface.

‘We show that pollution from rockets should not be underestimated as frequent future rocket launches could have a significant cumulative effect on the Earth’s climate,’ said Ioannis Kokkinakis from the University of Nicosia in Cyprus, who co-authored the study.

The researchers set out to assess the potential impact of a rocket launch on atmospheric pollution by investigating the heat and mass transfer and rapid mixing of the combustion byproducts for altitudes up to 41 miles (67 km) into the atmosphere.

The team at the University of Nicosia modelled the exhaust gases and developing plume at several altitudes along a typical trajectory of a standard present-day rocket.

They did this as a prototypical example of a two-stage rocket to transport people and payloads into Earth’s orbit and beyond.

They found that the emitted mass of carbon dioxide (CO2) as the rocket climbs half a mile (1 km) in altitude in the mesosphere is equivalent to that contained in 26 cubic km of atmospheric air at the same altitude.

The impact of these emissions on the atmosphere locally and momentarily in the mesosphere can be significant, according to the researchers.

The mesosphere sits just above the stratosphere, which extends up to about 40 miles and contains much of the ozone in the atmosphere.

In the mesosphere temperature decreases with height, reaching -130F.

While air currents will gradually transport and mix the exhaust CO2 throughout the atmosphere, eventually bringing the CO2 back down to its naturally occurring levels, the timescale over which this happens is not clear, the researchers said.

They believe a certain number of rocket launches might still exist above which mesospheric CO2 could accumulate over time, thus increasing the naturally occurring levels and affecting our climate.

The study suggests that, in the worst-case scenario, a rocket could produce sufficient thermal nitrogen oxides (NOx) to pollute over 2 cubic kilometers of atmospheric air with a NOx concentration that – according to the World Health Organization – would be at a level hazardous to human health.

‘We hope that commercial flight companies, such as SpaceX, Virgin Galactic, and the New Shepard, and their associated engine manufacturers, will consider these effects in future designs,’ said co-author Dimitris Drikakis.

The research has been published in the journal Physics of Fluids.

WHY DOES SPACEX RE-USE ROCKETS AND OTHER PARTS?

SpaceX tries to re-use rockets, payload fairings, boosters and other parts to try to cut down on the cost of each rocket mission.

The total cost of one of its Falcon 9 launches is estimated to reach £44 million ($61m), while each of its larger Falcon Heavy flights costs £65 million ($90m).

The space company has previously re-used first-stage and second-stage rocket boosters, in addition to one of its previously flown Dragon capsules.

The Dragon spacecraft are used as the final stage of SpaceX missions to resupply the International Space Station.