Talk about a long distance relationship! Some humpback whales travel up to 3,700 MILES to find a mate, study reveals

When it comes to finding a mate, humpback whales are willing to go the distance – quite literally.

New research has revealed that some humpback whales travel a whopping 3,700 miles (6,000km) in search of a mate during their breeding season.

Researchers from the Whale Trust Maui found that one male had travelled from off the coast of Mexico to the ‘Au’au Channel off Maui in just 49 days – a 3,693 miles (5,944km) journey.

Speaking to New Scientist, James Darling, who led the project, said: ‘Our first reaction was, “You’ve got to be kidding me!”

‘They might just be travelling the ocean like it’s their own backyard. This really changes the way we think about whales.’ 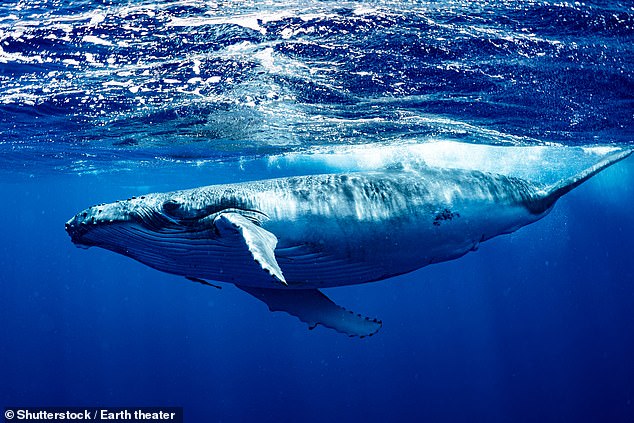 New research has revealed that some humpback whales travel a whopping 3,700 miles (6,000km) in search of a mate during their breeding season

Humpback whales live in all oceans around the world.

They travel great distances every year and have one of the longest migrations of any mammal on the planet.

Humpback whales feed on shrimp-like crustaceans (krill) and small fish, straining huge volumes of ocean water through their baleen plates, which act like a sieve.

In the study, the researchers studied the Happywhale database, which includes photos of more than 26,000 individual humpback whales, taken since 1977.

In particular, the researchers focused on two male humpback whales, who were photographed in both Hawaii and Mexico during the same winter breeding seasons.

And in 2018, a second whale was found to have travelled 3,693 miles (5,944km) from Zihuatanejo in Mexico to the ‘Au’au Channel off Maui, taking just 49 days to complete the journey.

When he reached his destination, he was one of seven males pursuing a single female.

Both whales had also been spotted in northern feeding grounds off Canada and Alaska during the summer months.

On average, humpback whales swim at speeds of around 2.5mph (4kph).

However, to complete their journeys in the time they did, the two males must have been swimming faster than this, according to the team.

While both sightings were of males, the researchers say females may also be making these mammoth journeys.

‘If the males were out there following females, it would make more sense than them out there by themselves swimming for 40 days sans females during the breeding season,’ Mr Darling said.

Overall, the findings suggest that contrary to popular believe, there aren’t distinct humpback whale populations in the north-east Pacific, according to the team. 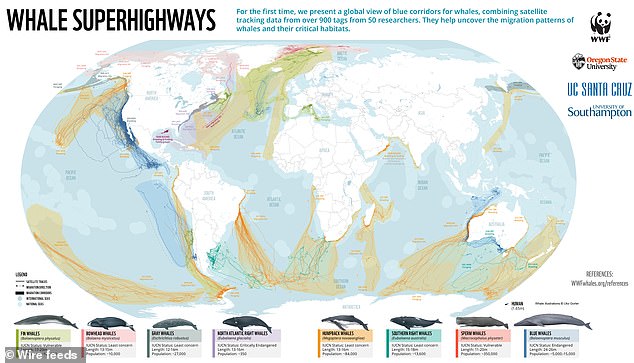 Instead, it’s likely that several groups overlap with one another. If this is the case, it could raise important questions about humpback whales’ conservation status.

The map was created by conservation charity WWF, and shows the ocean ‘superhighways’ whales use to travel around the globe.

It highlights the increasing threats facing the world’s whales in their key habitats and the blue corridors they use to migrate.

WWF is now calling for action by countries to safeguard the marine mammals along their superhighways.

HUMPBACK WHALE POPULATIONS AND THEIR THREATS

Humpback whales live in oceans around the world. They travel incredible distances every year and have one of the longest migrations of any mammal on the planet.

Some populations swim 5,000 miles from tropical breeding grounds to colder, plentiful feeding grounds – this is why it is difficult to estimate population size, according to the National Oceanic and Atmospheric Administration (NOAA).

Humpback whales live in oceans around the world. They travel incredible distances every year and have one of the longest migrations of any mammal on the planet

Some populations (such as those off eastern and western Australia) are believed to number in excess of 20,000 animals—a remarkable recovery given that the same populations were almost eradicated by whaling almost sixty years ago.

By contrast, the smallest known population is one which inhabits the Arabian Sea year-round, and may number as few as 80 individuals.

Threats to humpback whales include decline in food like Krill due to a combination of climate change and industrial-scale fishing.

Humpback whales can become entangled by many different gear types including moorings, traps, pots, or gillnets.

Once entangled, if they are able to move the gear, the whale may drag and swim with attached gear for long distances, ultimately resulting in fatigue, compromised feeding ability, or severe injury.

There is evidence to suggest that most humpback whales experience entanglement over the course of their lives, but are often able to shed the gear on their own.

Humpback whales are vulnerable to vessel strikes throughout their range, but the risk is much higher in some coastal areas with heavy ship traffic.

Underwater noise threatens whale populations, interrupting their normal behaviour and driving them away from areas important to their survival.

Sound has been shown to increase stress hormones in their system and mask the natural sounds humpback whales require to communicate and locate prey.