Great sac-winged bats are a field biologist’s dream. They hunt insects at dawn and dusk, stay awake much of the day and rest at night.

“They like fairly well lit places,” said Mirjam Knörnschild, a behavioral ecologist at the Museum of Natural History in Berlin who studies the bats, which roost on trees or the sides of buildings rather than in gloomy, guano-filled caves.

And the bats, about two inches long, keep enough distance between themselves to tell one from another. “We mark them with colored plastic rings on their forearms,” Dr. Knörnschild said. “We can also use a directional microphone and record the vocalizations of individual bats.”

That’s important because these bats are the only mammals other than humans that are known to babble like human babies. The babbling of bat pups includes adult syllables and sounds that only the young make, and the nature of the babbling changes over time as the bats learn territorial and courting songs. Also, their songs are not sung at the high-frequencies that bats use for echolocation.

“It instantly reminds you of infants,” said Ahana A. Fernandez, also at the museum, who conducted a recent analysis of the babbling with Dr. Knörnschild and other colleagues. Dr. Fernandez said the babbling behavior is well known, but had not been rigorously studied. The researchers wanted to “analyze the pup babbling behavior in detail and compare it to human infant babbling.”

They analyzed recordings of 216 “babbling bouts” of 20 bat pups from two colonies in Costa Rica and Panama, which averaged about seven minutes but lasted as long as 43 minutes. The researchers found that the sounds the pups make are similar to human infants in their repetition of syllables, the rhythmic nature of the babbling and the universality of babbling behavior. 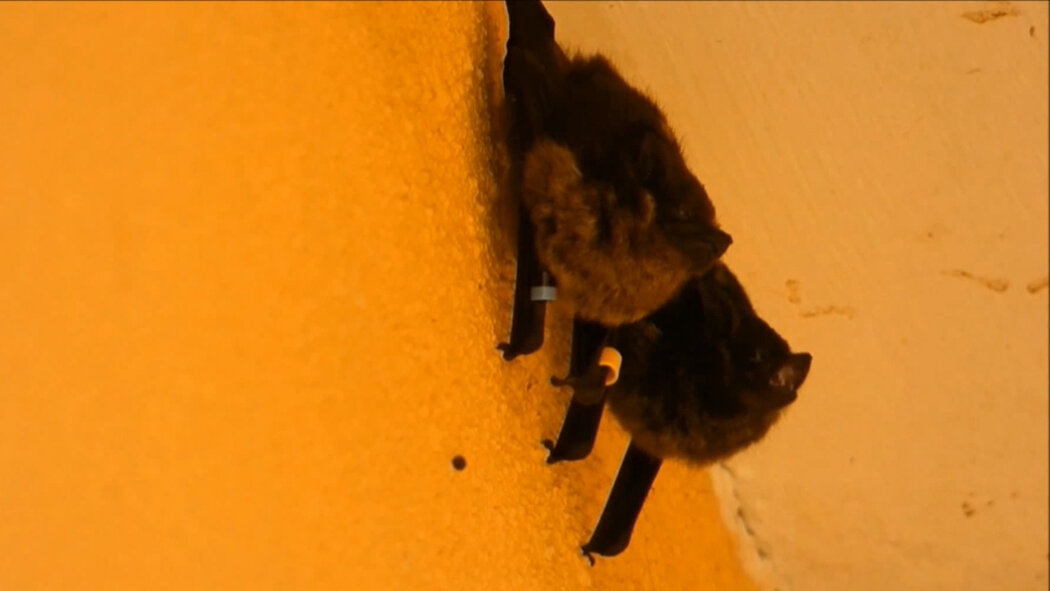 As with human babies, all the pups babbled. Other similarities with the babbling of human infants included the early start of babbling, the long sequences of sounds and the fact that the pups didn’t need any stimulus from other bats. Like babies, they just chattered on, gradually acquiring more sounds. The researchers published their results Thursday in the magazine Science.

D. Kimbrough Oller at The University of Memphis, who has studied the vocal development of human infants for decades, said “there are some remarkable parallels” with human babbling and also bird song in the extensive observations and analysis of the bat pups, one of which was just “the quantity of babbling that’s going on.”

Like human infants they made noise all the time.

“Whenever they’re awake, they’re doing it,” said Dr. Oller, who was not part of this research, but is collaborating with some of the authors on future papers. He said that the bats babble whether or not there’s any stimulation, as human infants do. Human babies seem to be exploring the sounds they make, he said, toying with them as if they were auditory objects, similar to physical objects that they manipulate and taste and play with. “The greater sac-winged bat I think is probably doing the same thing. I think that they’re probably exploring those sounds,” Dr. Oller said.

No other mammals are known to do this sort of babbling although it is common in songbirds.

Among the bats, both male and female pups babble, but females stop stringing together the syllables they’ve learned when they are weaned. Dr. Knörnschild said that adult females “don’t sing. They don’t produce territorial song or courtship song and males do.”

Why babble then? Dr. Fernandez said it may be that when the females learn what goes into a courtship song it makes them better judges of male song. This is only a hypothesis, but the females do certainly judge male songs. Males compete intensely with their bat-song to attract a harem of females. The females choose which male they prefer, and the males are constantly courting them, in a kind of ongoing talent competition.

“Female choice seems to play an extraordinarily strong role” in mating behavior, Dr. Knörnschild said. “The males are somewhat smaller than the females and they cannot physically force them to do anything.”

And the females may not be looking only for the smartest or most energetic singers, according to Richard Prum, an ornithologist at Yale. In his book, “The Evolution of Beauty,” he argued that whether it is plumage or dancing behavior or song, female birds and the females of some other animals, make choices based on essentially aesthetic criteria, what pleases them. He said that in the case of the bats, aesthetic choice could be driving the development of song.

Dr. Knörnschild said aesthetic choice was certainly a possibility, although she said there were also acoustic qualities in bat song that indicated the fitness of the males.

She also suspects there are more babbling species. So far the science of vocal learning has concentrated on birds, but among mammals, she said, mole rats, giant otters, dolphins and other cetaceans are good targets for research.

“It would be really interesting to have more babbling descriptions from different species to then maybe pinpoint the evolutionary pressures that cause babbling to appear in one species and not in another,” she said.