Solar storms are causing grey whales to get lost at sea and become stranded more often, according to researchers.

Experts from Duke University in North Carolina studied 31 years of data on grey whale strandings from 1985 to 2018, as well corresponding solar activity.

The findings suggest that the relationship between migrating animals and the Sun may be closer than previously understood, says researcher Jesse Granger.

They found that healthy grey whales were nearly five times more likely to become stranded when there is a high number of sunspots and increased solar activity.

The team say this could be due to the solar storms disrupting the whales’ ability to detect the Earth’s magnetic field, causing them to steer off course. 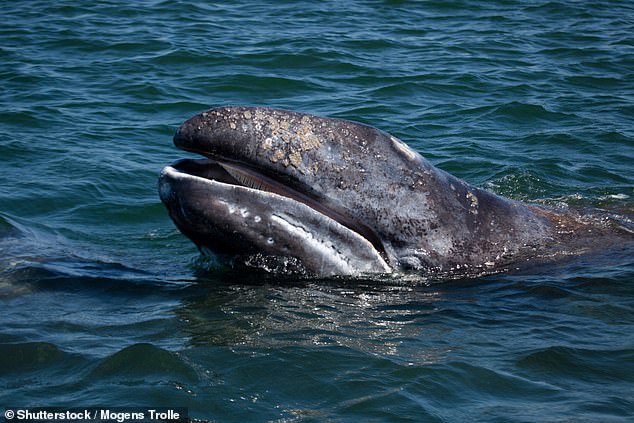 Experts from Duke University in North Carolina studied 31 years of data on gray whale strandings from 1985 to 2018, as well corresponding solar activity

Scientists are unsure exactly how whales navigate but think that migratory mammals such as grey whales use magnetoreception.

Magnetoreception is the ability to sense magnetic fields such as the one surrounding the Earth.

This research adds some evidence to the idea of grey whales using the magnetic field to find their way to breeding and feeding grounds during migration.

‘It’s a fascinating finding’, Kenneth Lohmann, a biologist who studies magnetoreception and was not involved in the study, told Live Science.

‘There have been several previous reports linking magnetic storms to whale strandings, but this is a particularly well-done and convincing analysis.’

Western grey whales migrate to their summer feeding grounds in Russia in May or June and return to winter grounds in the South China Sea in the autumn.

Eastern populations of the whales migrate from Russia to the west coast of the US to have their calves in the winter.

Their migration takes them as far as 12,000 miles in a round trip and they stay close to the shore to feed in shallow water.

At certain times there have been higher numbers of whales stranded on beaches or rocks and this is what the Duke team set out to investigate. 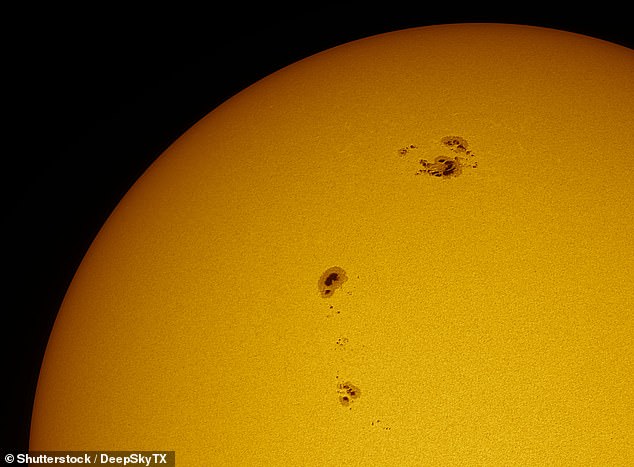 The team found that although there are a number of reasons a whale might become stranded, one reason could be that it made a navigational error.

This may have happened due to something disrupting Earth’s magnetic field or the whale’s ability to detect the field, says Granger.

WHAT DO WE KNOW ABOUT THE GRAY WHALE?

Finding a link between an increase in whale strandings and a high number of sunspots wasn’t enough to explain the strandings alone.

Sunspots cause a large increase in electromagnetic radiation but most of it doesn’t make it to the surface as it is blocked or scattered by the atmosphere.

“However, there’s a huge chunk in the radio frequency wave range that does make it all the way to the Earth,” Granger told Live Science.

The researcher said that it has been shown in several species that radio frequency noise can disrupt the ability to navigate using the magnetic field.

‘Although many factors impact strandings, such as naval mid-frequency sonar, upwellings, disease and anthropogenic noise, here we focus on whether strandings can be used to study the potential for magnetoreception in migratory whales’, Granger said in the paper.

‘We examined the frequency of live strandings in relation to sunspot count, and performed a permutation statistical test that demonstrated that strandings occurred more often on days with high solar activity.’

‘More work will be needed to determine whether the storms are affecting whale navigation or having some other effect’, said Lohmann.

The research was presented at a meeting of the Society for Integrative and Comparative Biology on January 7.

They were introduced as a way to communicate to the general public the current and future space weather conditions and their possible effects on people and systems.

The scales have numbered levels, analogous to hurricanes, tornadoes, and earthquakes that convey severity.

Other systems: Pipeline currents can reach hundreds of amps, high frequency radio propagation may be impossible in many areas for one to two days, satellite navigation may be degraded for days, low-frequency radio navigation can be out for hours, and aurora has been seen as low as Florida and southern Texas (typically 40° geomagnetic latitude).

Power systems: Possible widespread voltage control problems and some protective systems will mistakenly trip out key assets from the grid.

Spacecraft operations: May experience surface charging and tracking problems, corrections may be needed for orientation problems.

Spacecraft operations: Surface charging may occur on satellite components, drag may increase on low-Earth-orbit satellites, and corrections may be needed for orientation problems.

Other systems: Intermittent satellite navigation and low-frequency radio navigation problems may occur, HF radio may be intermittent, and aurora has been seen as low as Illinois and Oregon (typically 50°geomagnetic latitude).

Other systems: HF radio propagation can fade at higher latitudes, and aurora has been seen as low as New York and Idaho (typically 55° geomagnetic latitude).

Other systems: Migratory animals are affected at this and higher levels; aurora is commonly visible at high latitudes (northern Michigan and Maine).