Social media users are encouraged to express more outrage on Facebook and Twitter because they get rewarded with ‘likes’ and ‘shares’, researchers say

Researchers from Yale University used artificial intelligence to scan the tweets of more than 7,000 individuals and see how levels or moral outrage changed with time.

Their analysis revealed that the more positive responses people got for expressing outrage online, the more likely they were to post more indignant content in future.

They also found politically moderate individuals to be more susceptible to the social rewards of expressing outrage — showing how they may be radicalised over time.

These findings challenge the claims of social media firms that their platforms just provide a neutral venue for conversations that would otherwise happen elsewhere. 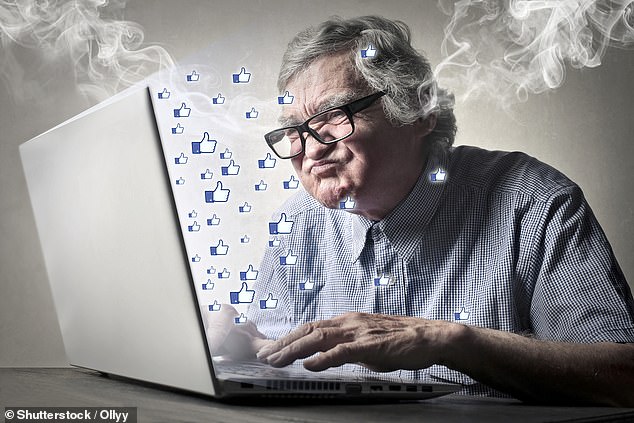 According to the researchers, their study did not aim to determine when social media’s amplification of moral outrage was a bad or good thing.

On the one hand, moral outrage can serve as a force for social good — spurring change, promoting cooperation and, where necessary, checking social transgressions.

Yet at the same time, outrage can lead to political polarisation, aid the spread of disinformation and increased harassment against minority groups.

Either way, however, the findings have implications for users of social media and policy makers responsible for choosing if and how to regulate them.

‘Given that moral outrage plays a crucial role in social and political change, we should be aware that tech companies, through the design of their platforms, have the ability to influence the success or failure of collective movements.

‘Our data show that social media platforms do not merely reflect what is happening in society. Platforms create incentives that change how users react to political events over time.’

In their study, Professor Crockett and colleagues developed a machine-learning powered AI system that was capable of detecting moral outrage in Twitter postings.

Using this, they analysed a total of 12.7 million tweets from 7,331 individuals to determine if users tended to express more outrage over time.

The team found that those users who received more ‘likes’ and ‘retweets’ in response to their expressions of outrage were significantly more likely to express outrage in the subsequent post that they made.

These tests also found that being rewarded for expressing outrage encouraged users to act more outraged over time.

Based on their original analysis, the team also found that outrage was more extensively expressed among members of politically extreme online networks — but that politically moderate users of social media were more influenced by the rewards.

‘Our studies find that people with politically moderate friends and followers are more sensitive to social feedback that reinforces their outrage expressions,’ explained Professor Crockett.

‘This suggests a mechanism for how moderate groups can become politically radicalised over time — the rewards of social media create positive feedback loops that exacerbate outrage.’

‘This is the first evidence that some people learn to express more outrage over time because they are rewarded by the basic design of social media,’ said paper author and psychologist William Brady, also of Yale.

He added: ‘Social media’s incentives are changing the tone of our political conversations online.’

WHAT HAVE OTHERS SAID ABOUT FACEBOOK’S NEGATIVE IMPACTS ON ITS USERS?

Ex-Google and Facebook workers are campaigning to raise awareness of the negative effects of using products made by their former employers.

Among their concerns are addiction to technology and its impact on individuals, particularly children and younger users, as well as society as a whole.

Tristan Harris, a former in-house ethicist at Google is spearheading the new group, called the Center for Humane Technology.

The newly-launched initiative, which is working with the nonprofit media watchdog group Common Sense Media, is planning to lobby the United States government over tech addiction.

It is also undertaking an advertising campaign aimed at 55,000 public schools in the US, to raise awareness with parents, students and teachers over its concerns.

These include the mental health effects of overuse of social media, including depression, stress, anxiety, self-image and self-worth, according to the group’s website.

The campaign, called The Truth About Tech, also seeks to address more wide-ranging problems caused by technology, including its power to influence our relationships and even our political beliefs.

Speaking to the New York Times Mr Harris, said: ‘We were on the inside. We know what the companies measure. We know how they talk, and we know how the engineering works.

‘The largest supercomputers in the world are inside of two companies — Google and Facebook — and where are we pointing them?

‘We’re pointing them at people’s brains, at children.’

In December 2017, former Facebook executive Chamath Palihapitiya also spoke out against the social network he helped to create, saying it is ‘ripping society apart’.

Mr Palihapitiya, who joined Facebook in 2007 and became its vice president for user growth, said he feels ‘tremendous guilt’ for the influence Facebook has had and its ability to manipulate users.