Smartwatches are less effective at tracking the health of people with dark skin, study finds

Joggers and other keep fitness fans are increasingly turning to smartwatches to measure their heart rate during exercise and for overall health monitoring.

But a new study by the University of Alberta in Canada suggests that the trendy gadgets are less effective at tracking the health of people with darker skin tones.

The study suggests this may be because the signalling process might not work as well in darker skin that contains more melanin, which absorbs light.

However, the algorithms that power these devices are often developed by and tested on homogeneous white populations, which may mean the problems were not identified prior to launch.

The latest findings are based on a systematic review of 10 previously published studies involving more than 460 participants. 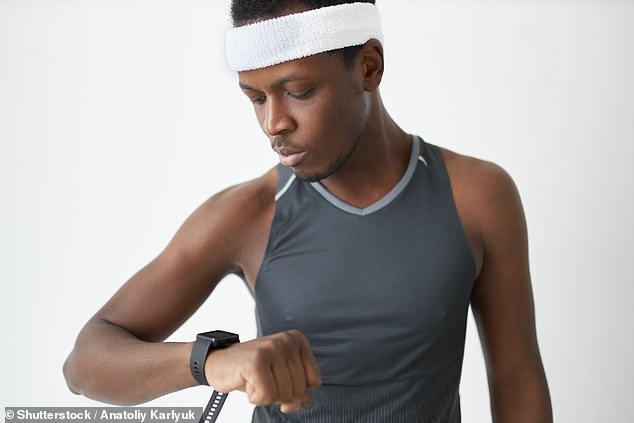 HOW DO FITNESS TRACKERS WORK?

The tracker sends green light through the skin which is partially absorbed by arteries.

As you exercise, these arteries expand as blood flow increases – meaning more green light is absorbed rather than reflected back to the tracker.

The tracker estimates your heart rate by seeing how much light is reflected back.

The amount of light that passes back through the skin to the tracker can be affected by the amount of melanin in the skin, and any tattoos.

The research is the first to pool figures from multiple studies to specifically examine how skin tone may affect the accuracy of heart data in wearables.

Study co-leader Doctor Daniel Koerber said: ‘People need to be aware that there are some limitations for people with darker skin tones when using these devices, and the results should be taken with a grain of salt.

‘Algorithms are often developed in homogeneous white populations, which may lead to results that are not as generalisable as we would like.

‘Ongoing research and development of these devices should emphasise the inclusion of populations of all skin tones so that the developed algorithms can best accommodate for variations in innate skin light absorption.’

The research team identified 10 studies, from 622 scientific papers, that reported heart rate and rhythm data for consumer wearable technology according to a participant’s race or skin tone.

Of those studies, four found that heart rate measurements were ‘significantly less accurate’ in darker-skinned people compared with either lighter-skinned individuals or measurements from validated devices, such as chest strap monitors or electrocardiograms.

One study reported that although there was no difference in heart rate accuracy, wearable devices recorded ‘significantly fewer’ data points for people with darker skin.

Dr Koerber explained that most wearables detect heart rate and rhythm by aiming a beam of light at the wrist and then detecting how much light is absorbed.

Greater light absorption indicates a greater volume of blood flowing through the veins under the skin.

He said the study results suggest that the signalling process might not work as well in darker skin that contains more melanin, which absorbs light.

In addition to the rising use of wearables to monitor physical activity and sleep patterns, interest in the use of consumer wearables for medical research and even early detection of heart problems has increased in recent years. 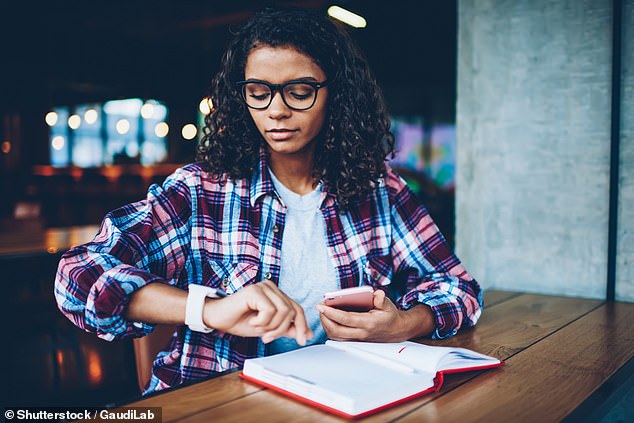 The study results suggest that the signalling process might not work as well in darker skin that contains more melanin, which absorbs light

Dr Koerber, resident physician at the University of Alberta in Edmonton, Canada, said: ‘There are a lot of claims that these devices can detect heart rhythm issues like tachycardia, bradycardia and even atrial fibrillation.

‘We want to be able to inform health care providers about whether these are reliable sources for collecting data in all patients, regardless of skin tone.’

Dr Koerber says the study underscores the importance of ensuring technology meets the needs of diverse populations, especially when it is intended to improve health.

He said recent studies have reported that other devices – such as pulse oximeters used to measure the amount of oxygen in the blood – also don’t perform as well for people with darker skin tones, which can lead to serious health consequences if problems go undetected.

Dr Koerber added: ‘It is important to explore alternative options to make sure we can create a more equitable solution in health care and not just in the consumer industry.

‘For example, there is some evidence to suggest that certain wavelengths of light, particularly green light, are more accurate in people across all skin tones.’

He is due to present the findings at the American College of Cardiology’s annual conference in Washington DC next month.