With their bright saucer eyes, button noses and plump, fuzzy bodies, slow lorises — a group of small, nocturnal Asian primates — resemble adorable, living stuffed animals. But their innocuous looks belie a startling aggression: They pack vicious bites loaded with flesh-rotting venom. Even more surprising, new research reveals that the most frequent recipients of their toxic bites are other slow lorises.

“This very rare, weird behavior is happening in one of our closest primate relatives,” said Anna Nekaris, a primate conservationist at Oxford Brookes University and lead author of the findings, published Monday in Current Biology. “If the killer bunnies on Monty Python were a real animal, they would be slow lorises — but they would be attacking each other.”

Even before this new discovery, slow lorises already stood out as an evolutionary oddity. Scientists know of just five other types of venomous mammals: vampire bats, two species of shrew, platypuses and solenodons (an insectivorous mammal found in Cuba, the Dominican Republic and Haiti).

Researchers are just beginning to untangle the many mysteries of slow loris venom. One key component resembles the protein found in cat dander that triggers allergies in humans. But other unidentified compounds seem to lend additional toxicity and cause extreme pain. Strangely, to produce the venom, the melon-sized primates raise their arms above their head and quickly lick venomous oil-secreting glands located on their upper arms. The venom then pools in their grooved canines, which are sharp enough to slice into bone.

“The result of their bite is really, really horrendous,” Dr. Nekaris says. “It causes necrosis, so animals may lose an eye, a scalp or half their face.” 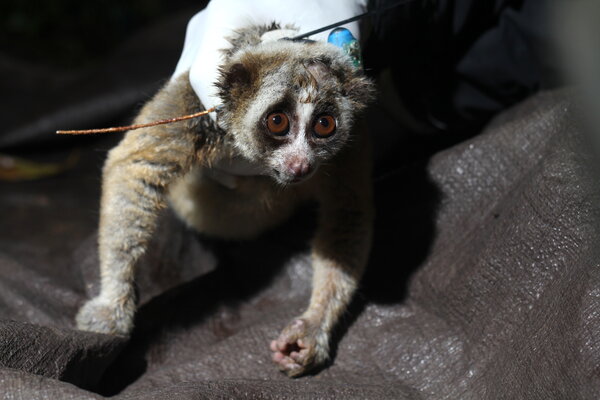 Before this study, many still debated the primary purpose of slow loris venom. Capturing prey was ruled out because tree gum is their primary food. That made defense against predators or parasites into leading hypotheses. But anecdotal evidence has also hinted for years that slow lorises may use their venom against their own.

For example, slow lorises are popular in the illegal pet trade. Illegal pet traders in Indonesia told Dr. Nekaris that they remove the animals’ teeth not to protect future owners, but to prevent slow lorises from harming each other and ruining their price. Poachers interviewed by her also complained of sometimes capturing “ugly” slow lorises with extensive scarring or gaping wounds that they had to let go because no pet buyer would want them.

Additionally, zoo and rescue facility staff report that one of the most frequent causes of death for slow lorises is bites from other slow lorises.

Over an eight-year span, the researchers spent more than 7,000 hours monitoring their study subjects in a two-square mile patch of forest. They recaptured the animals every few months for health checks.

Shockingly, across all captures, 20 percent of slow lorises had fresh bite wounds — oftentimes severe, flesh-rotting injuries that entailed a lost ear, toe or more. Males suffered more frequent bites than females, as did young animals dispersing from their parents’ territories. While necrotic wounds were a regular occurrence, predation was not; since 2012, the researchers have lost just one Javan slow loris to a predator, which was a feral dog.

Dr. Nekaris and her colleagues concluded that slow lorises are remarkably territorial, and that they frequently use their venom to settle disputes. This puts them among just a handful of other species known to use venom for this purpose, including cone snails, ghost shrimp and male platypuses.

The findings represent “a really cool addition to our knowledge,” said Kevin Arbuckle, an evolutionary biologist at Swansea University, who was not involved in the new study.

The paper also lends unique insight into how individuals of the same species may use venom on one another to compete for limited resources such as mates or territory — something that few studies have examined, said Ronald Jenner, a venom specialist at the Natural History Museum in London, who also was not involved in the research. “To my knowledge, this is the most extensive field study ever done on this topic.”