Shocking footage of a wet market in Vietnam has revealed frogs having their legs cut off with scissors, turtles struggling to escape from cages, and fish being hit with knives as the coronavirus pandemic ravages the globe.

Chickens and ducks were also seen sitting on top of each other in cramped cages that were placed next to the decapitated bodies of other ducks, while the skinned bodies of dogs lay on market tables.

The chilling scenes unfolded despite repeated warnings that close proximity to animals and unsanitary conditions raise the risk of a new pandemic.

Coronavirus, which has triggered a global lockdown, is believed to have jumped into humans from bats via an intermediary animal at a wet market in Wuhan, China. 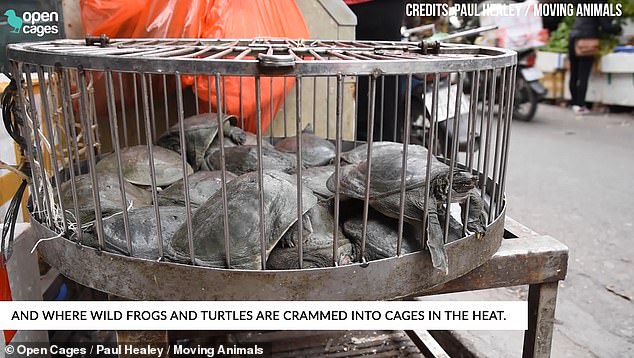 Turtles were filmed scrambling to get out of cages at a wet market inside Vietnam. The conditions are continuing despite the risk they pose of triggering a second pandemic 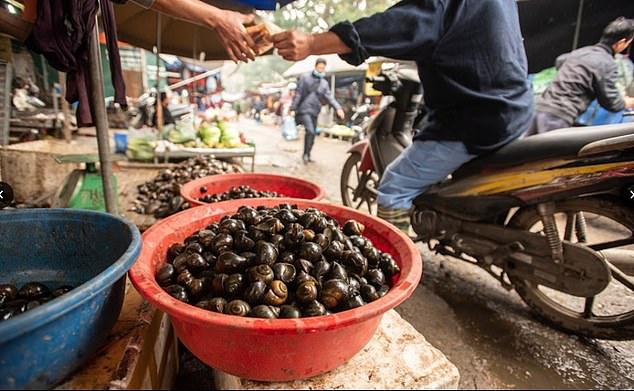 One clip from the market shows piles of frog intestines on the floor as a worker rips the skin off a frogs legs before chucking it into a bloodied and dirty basket.

The scissors used to cut the frog are then placed into the pile of intestines, before being picked up for re-use.

In a second clip the fish are seen being decapitated on a block stained red by the blood of other fish moments earlier.

One worker is even shown pinning a fish down as they decapitate it without wearing gloves, a face mask, or an apron to cover their clothes.

Another worker, cutting up frogs, is shown wearing only plastic gloves and wellies.

The World Health Organisation has warned that conditions such as these are ‘unacceptable’ due to the risk they pose to human and animal health.

They said: ‘It increases the risk of contamination of the meat with foodborne pathogens.’ 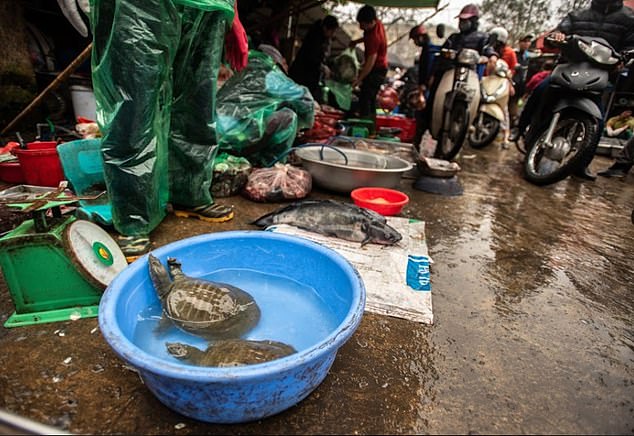 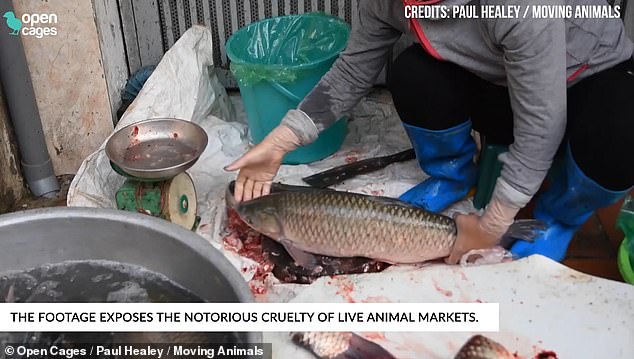 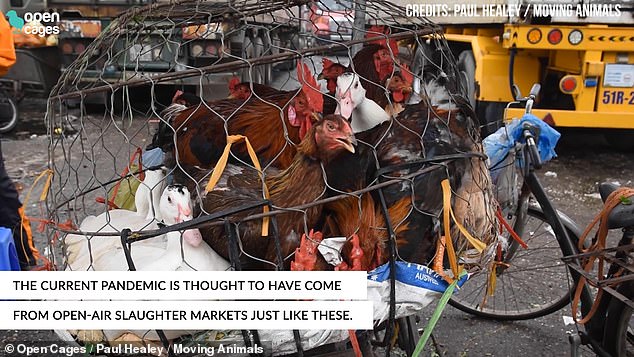 The World Health Organisation has warned that conditions like these risk triggering a second pandemic. Coronavirus is thought to have jumped into humans at a wet market

The animal rights activists that took the footage told MailOnline: ‘The conditions and slaughter process, as well as being horrendous for the animals, pose a real risk for pathogen spread to workers.

‘(They) are constantly exposed to potentially infected animals, and to customers on these busy markets.

‘In these poorly regulated markets animals are usually slaughtered in the middle of market stands, often on the floor among cages filled with more animals – by using simple tools like scissors.’

Vietnam was forced to close all schools and impose a 14-day quarantine for travellers as it faced the pandemic.

However, swift action and relentless contact tracing meant that the country only suffered 355 cases, and is yet to record a single death. 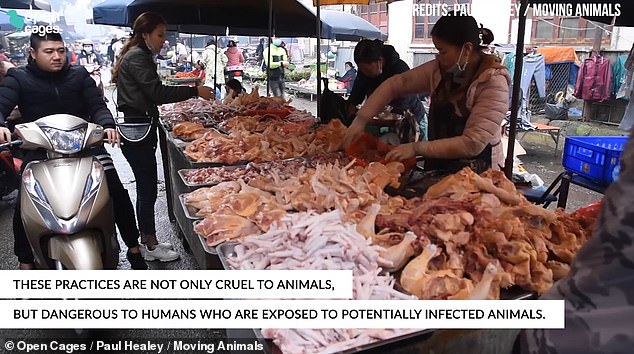 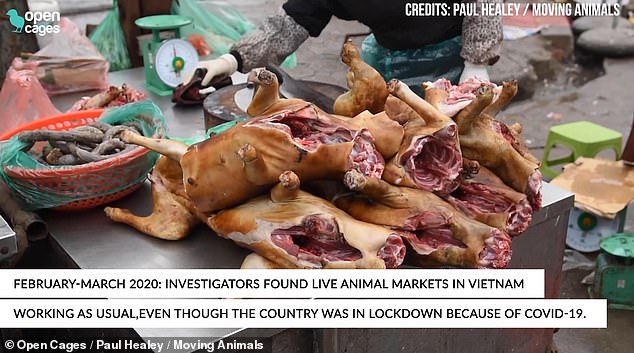 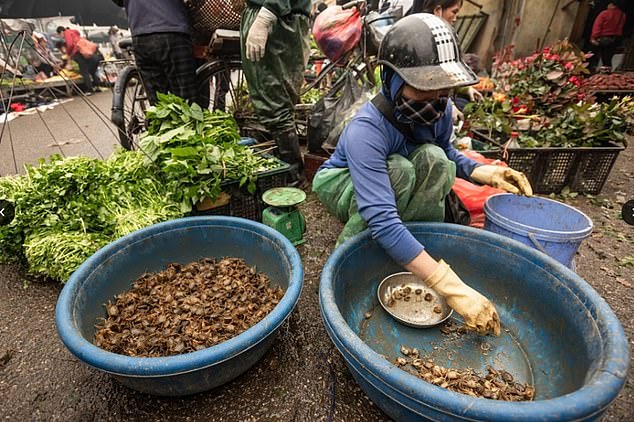 A worker is shown here transferring crabs between pots. They have exposed skin and do not appear to be wearing an apron

Its government is currently considering a ban on wildlife trade in response to the pandemic, but it is unclear whether this will cover only viral reservoir species – such as bats and pangolins – or be extended.

Prime Minister Nguyen Xuan Phuc tasked the Ministry of Agriculture and Rural Development to come up with a plan by April 1.

But, following the country’s success in handling the disease, the government appears to have abandoned the proposal, reports Mongabay.

China is the only country to have implemented a large-scale ban on its wildlife trade since the pandemic began.

Conservation organisations including PETA and Open Cages are calling on countries to end all wet markets.

The WHO initially appeared to support the proposals before backing away on May 9. 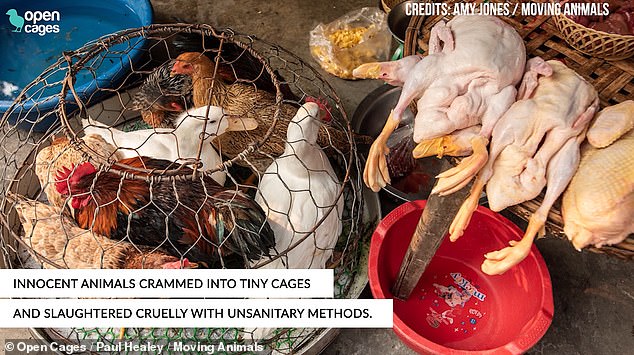 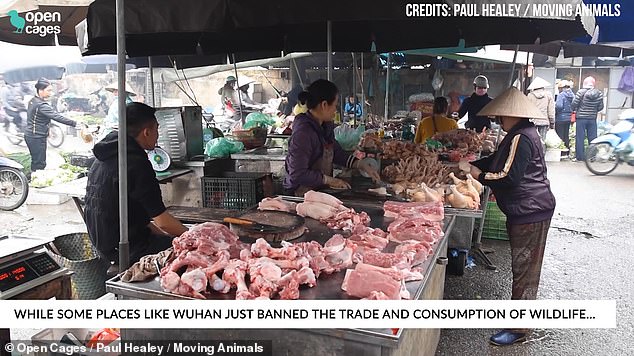 Vietnam is thought to be considering a ban on wet markets, although it is unclear whether this will go ahead. The country has suffered less than 1,000 cases of coronavirus 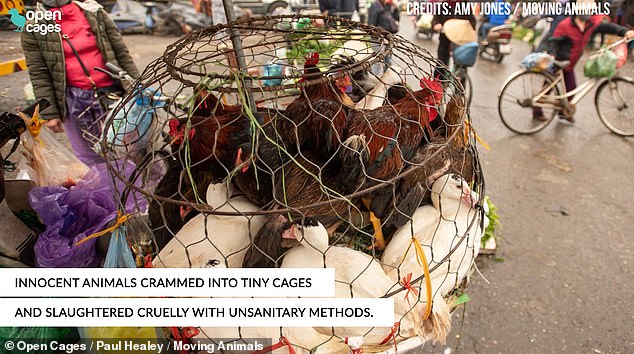 Open Cages CEO, Connor Jackson, said: ‘When will we learn? The covid-19 outbreak has exposed how fragile, cruel and dangerous wet markets are.

‘So we cannot leave animal well-being and the safety of humanity in the hands of ineffective regulations.

‘Ban these cruel live animal markets and the risk of another pandemic will be significantly reduced. We urge the Vietnamese authorities to close these facilities immediately.’

The video was filmed between February and March 2020, at the beginning of the outbreak, before it was released today. Activists said the market has remained open.

The markets location inside Vietnam was not disclosed.

What is the origin of coronavirus? 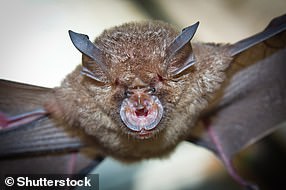 Bats are said to be the origin of  Covid-19

Coronavirus, or SARS-CoV-2, first jumped to humans from bats, genetic evidence has confirmed.

Research published in The Lancet said bats were the ‘most probably’ original host of the virus, after analysing samples taken from the lungs of nine patients in Wuhan.

And scientists at the Chinese Academy of Sciences, the People’s Liberation Army and Institut Pasteur of Shanghai, have also pointed the finger to bats as the likely origin.

However, where the virus made the jump into humans remains unclear.

Initial reports suggested it happened at a ‘wet market’ in Wuhan, China, where humans are exposed to animal meat, blood and excrement.

However, Chinese authorities have sought to pour cold water on this and label the market as a victim rather than a ‘super-spreader’.

They said a test of animals in the market showed ‘none’ had Covid-19.

This challenged research by scientists at Harvard, MIT and the University of British Columbia, who examined four samples from the market and found traces of the virus ‘99.9 per cent’ identical to those taken from a Wuhan patient.

The first case of coronavirus was reported in Wuhan in December 2019.