The race is on for One-Eyed Willy’s treasure, as part of the shipwreck of the boat that inspired ‘The Goonies’ has been found.

Marine archaeologists have recovered timbers from the hull of the 17th-century Spanish galleon Santo Cristo de Burgos in sea caves in Oregon, USA.

The ship is said to have inspired Steve Spielberg’s 1985 cult adventure film ‘The Goonies’, in which a group of children follow a treasure map leading to a pirate’s fortune.

The recovery mission was prompted after a local fisherman reported his discovery of some old timbers in a sea cave to the Maritime Archaeological Society (MAS) in 2020.

After a year of delays, and with the help of local law enforcers and search-and-rescue specialists, the timbers were finally recovered this week.

They are being kept in the Columbia River Maritime Museum, and it is hoped more information will be revealed as to how Manila galleons were built.

The location of the rest of the shipwreck remains a mystery – as archaeologists believe the timbers may have been washed away from the wreck site.

The 105-foot-long ship Inferno that was purpose built for ‘The Goonies’, meanwhile, was destroyed after production. 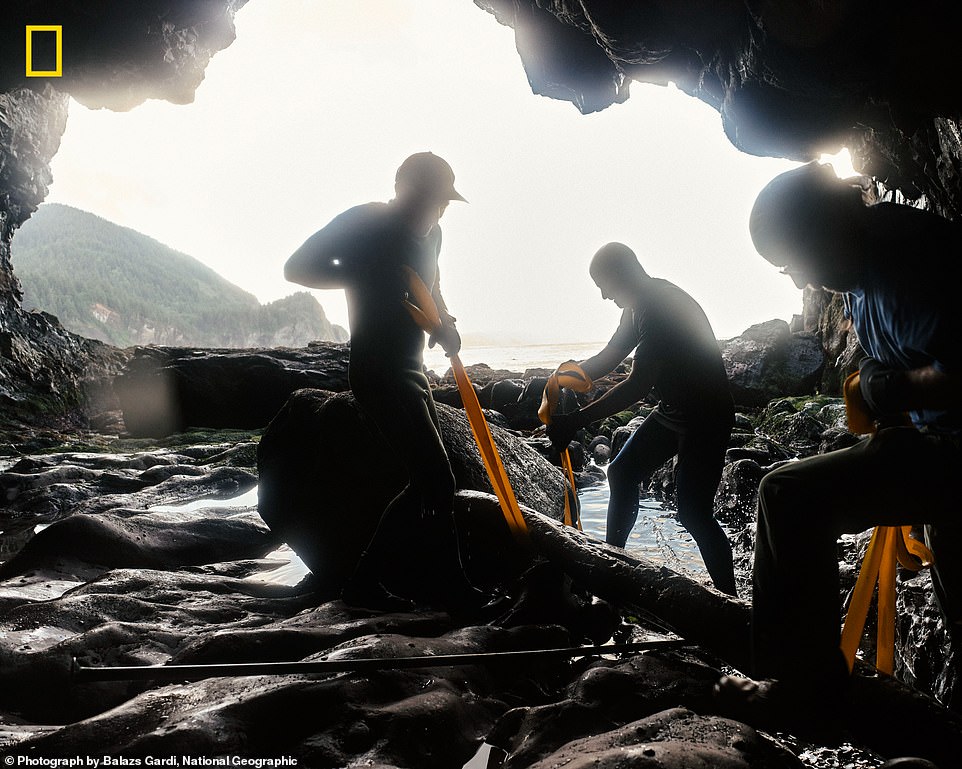 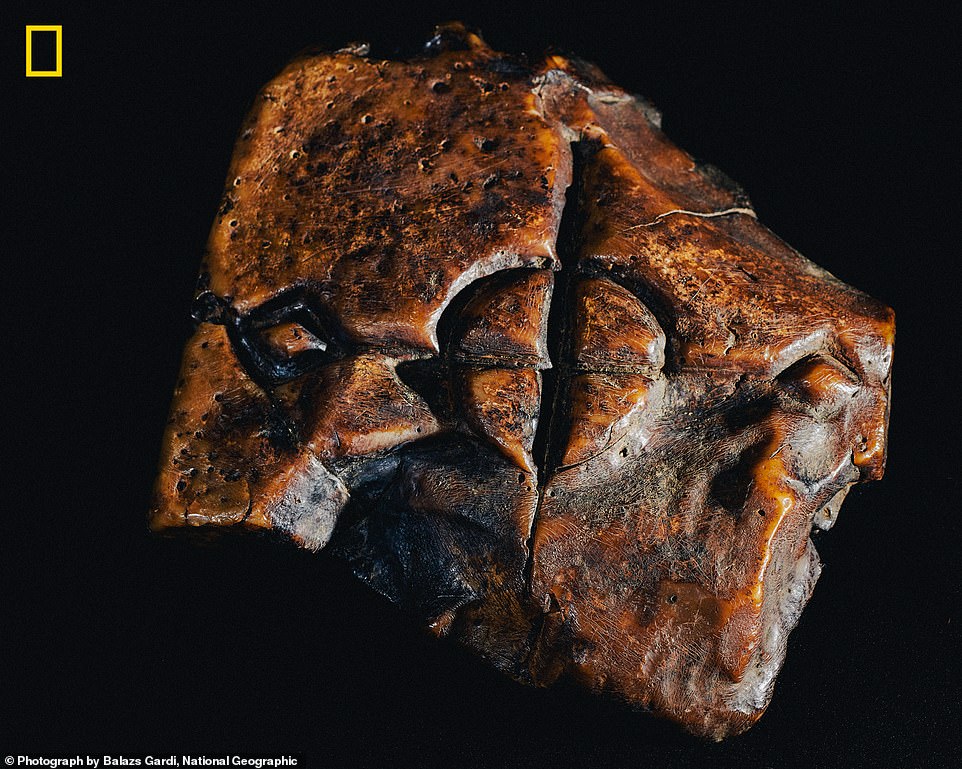 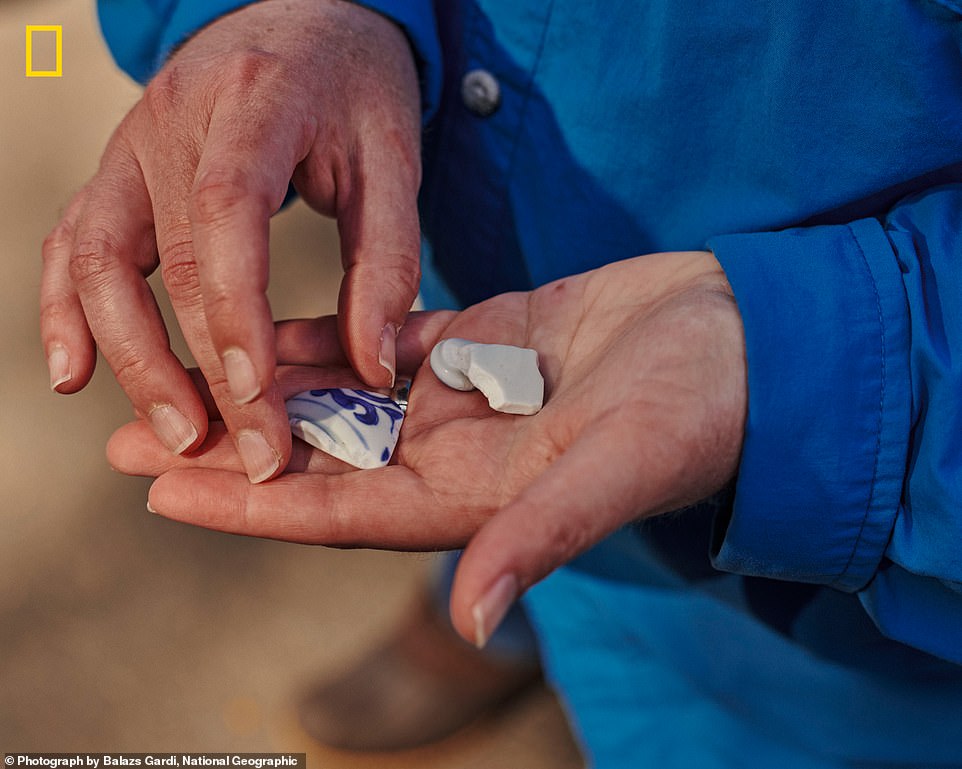 Coastal Region District archaeologist Stacy Scott of the Oregon Parks and Recreation Department holds porcelain likely carried by the galleon. ‘We’re tasked with the stewardship of these resources. We step up to the job.’ 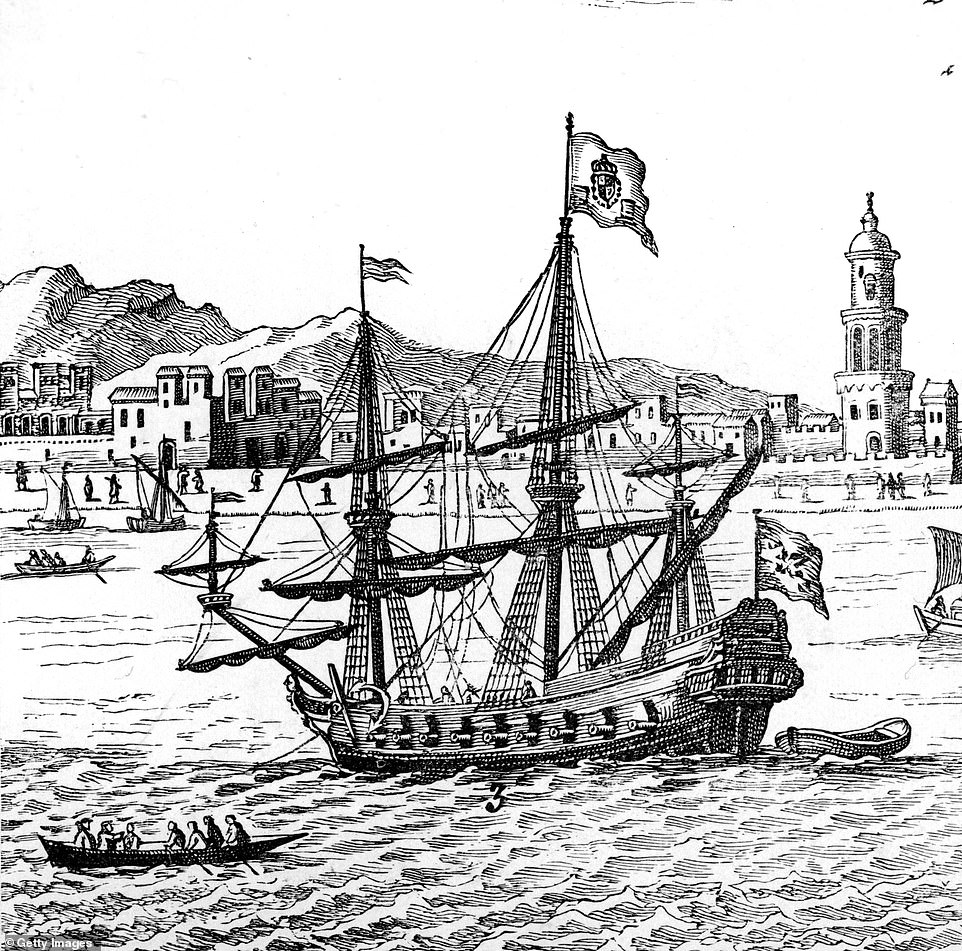 Manila galleons were sturdy wooden vessels that were built in Asia, but sailed by Europeans 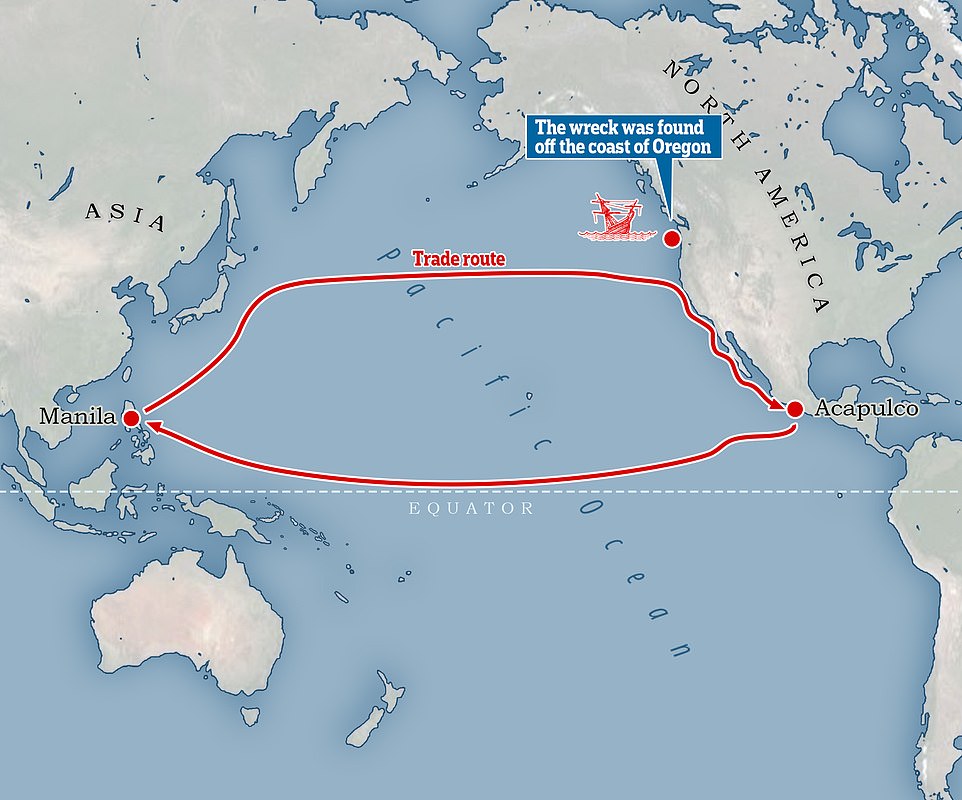 Galleons sailed the trade route between the Philippines and Mexico from 1565. Evidence of the Santo Cristo de Burgos shipwreck was found off the coast of Oregon. Source: The Archaeology of Manila Galleons in the American Continent by Scott S. Williams and Roberto Junco

In 2006, a group of archaeologists from the Maritime Archeology Society started The Beeswax Wreck Research Project

They studied thousands of pieces of Chinese porcelain collected by beachcombers over the years, that had allegedly been washed from a mysterious shipwreck that had carried beeswax

They determined they porcelain was from the Kangxi period, 1661-1722, and concluded that the Beeswax Wreck thus had to be one of two Manila galleons that went missing between roughly 1650 and 1750

One was the Santo Cristo de Burgos, which was lost in 1693, or the San Francisco Xavier, which disappeared in 1705

An area near the Nehalem River where beeswax, porcelain, and pieces of a wooden ship had been found was found to be under a sediment layer left by a tsunami in 1700

As its contents was being regularly delivered to the beach, the experts concluded it had to be somewhere offshore

In 2020, laboratory tests concluded that some timbers found in a sea cave once formed the hull of the ship

These were recovered this week, and are the first piece of physical evidence to confirm its existence

Jim Delgado, an archaeological investigator and the senior vice president of cultural resource management firm SEARCH Inc, told National Geographic: ‘These timbers are physical evidence for the stories that have been known and passed down through generations.’

A written account from 1813 tells of a Spanish manila galleon that was wrecked in the late 1600s near Neahkahnie Mountain.

Indigenous tribes also passed down the legend of a ship that had vanished off the Oregon coast around 1693, carrying porcelain, beeswax and Chinese silk.

These were backed up by mysterious chunks of beeswax that would continue to appear along the shoreline of Nehalem Bay throughout the 19th century.

Legends of lost treasure were widely reported in Oregon newspapers during the late 20th century, and allegedly caught the attention of director Steven Spielberg.

This sparked the idea for ‘The Goonies’, where a troupe of kids discover a treasure map that leads them to the long-lost fortune of One-Eyed Willy, a 17th-century pirate who hid his bounty on his ship.

Further evidence of the wreckage had never been located, until in 2013 fisherman Craig Andes came across some mysterious timber remnants in sea caves near Manzanita.

He thought they might have once been part of the Santo Cristo de Burgos, and kept an eye on them until he started to get concerned smaller pieces would be washed away.

In 2020, he contacted the MAS, which had been searching for evidence of the wreckage since 2006, and asked them to perform some tests.

Lab analysis confirmed the hardwood was tropical Anacardiaceae, and radiocarbon dating indicated that the tree was felled around 1650.

This meant it was of the type and age that would have been used for the ship, and prompted a recovery mission.

That summer, archaeologists scrambled into the sea caves, only accessible at low tide, to further study the wood.

They concluded that they were not evidence of the shipwreck itself, but had perhaps been washed into the cave by a tsunami in 1700. 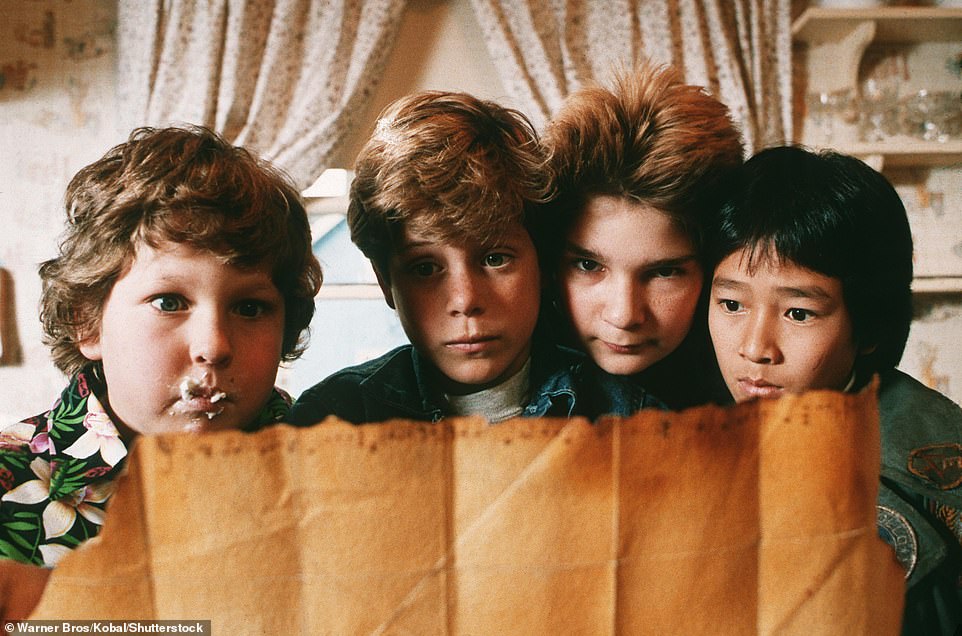 The ship is said to have inspired the 1985 cult adventure film ‘The Goonies’, in which a group of children follow a treasure map leading to a pirate’s fortune 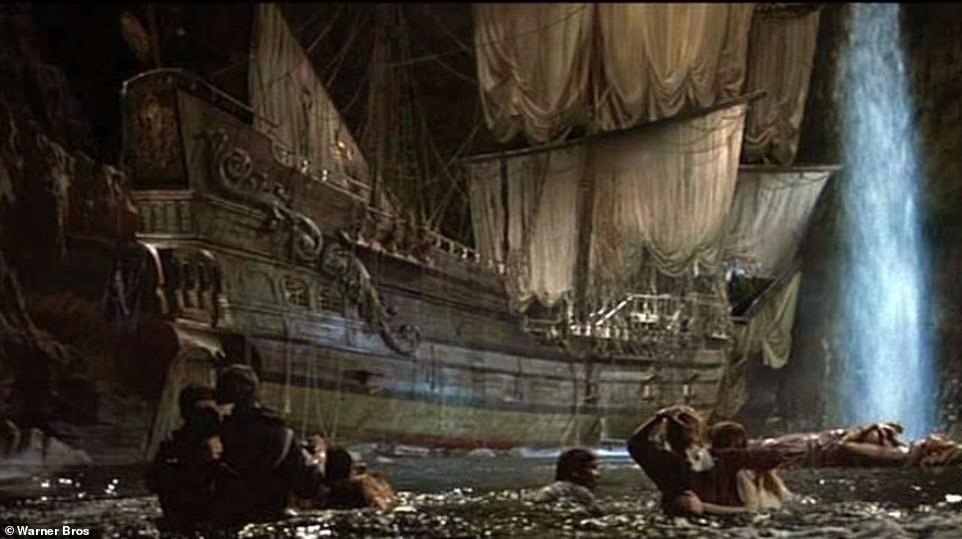 The 105-foot-long ship Inferno, built for ‘The Goonies’, was destroyed after production 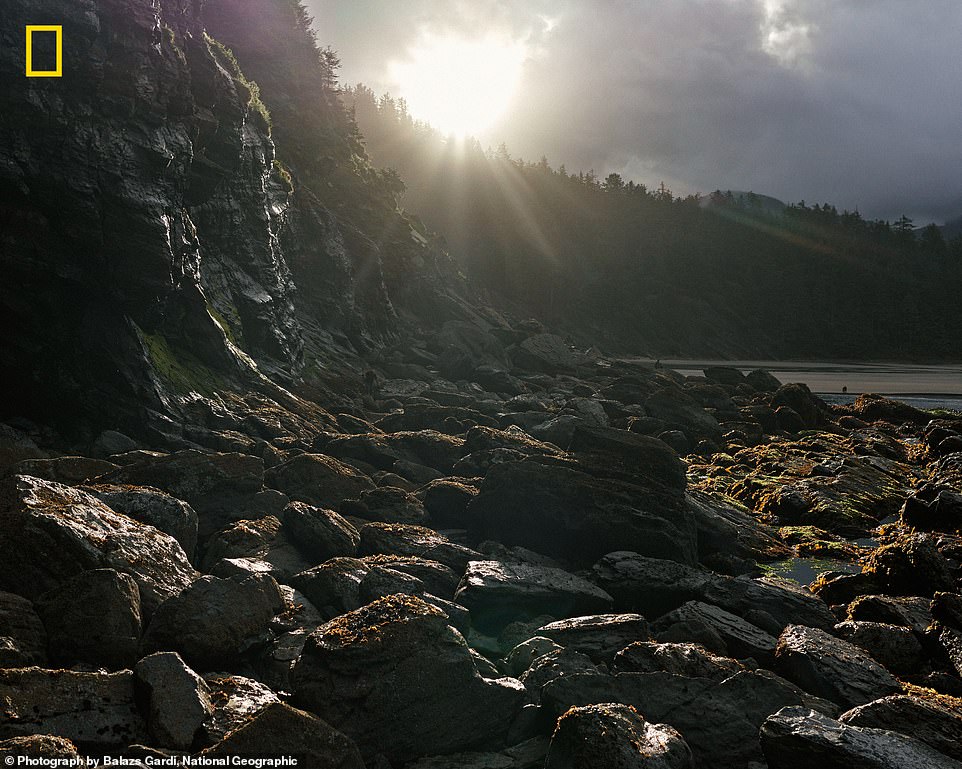 While the timber has confirmed these are the likely remains of the Santo Cristo de Burgos, archaeologists will continue to search for other parts of the wreck that may remain offshore 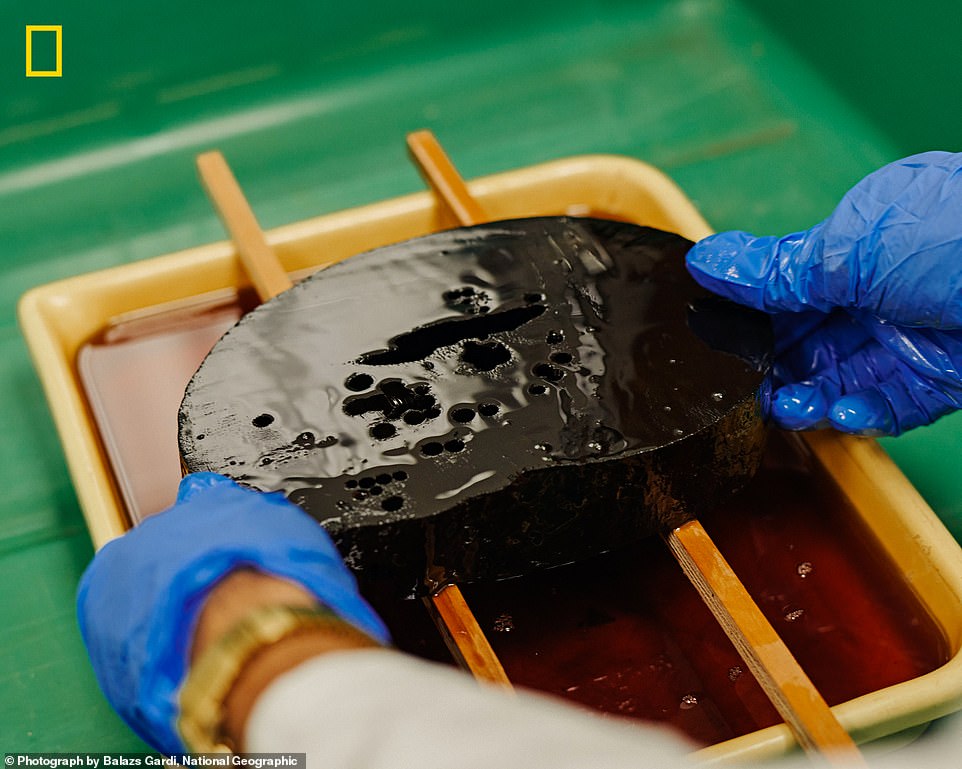 Due to the risky nature of reaching the timbers, and the COVID-19 pandemic, their recovery was delayed until earlier this week.

Archaeologists from MAS and SEARCH Inc along with personnel from the Tillamook and Clatsop Counties Sheriff’s Offices and the Nehalem Valley Fire Department all took part in ensuring the timbers’ extraction was completed safely.

They are now stored in the Columbia River Maritime Museum in Astoria, where they will be documented and preserved.

The timbers evidence the legends that have been passed down for generations, and it is hoped they will lead to better understanding of how the huge ships were built.

The MAS teams will continue to search for the source of porcelain and beeswax that still washes up on the coast, and further remains of the Santo Cristo de Burgos.

For more on this story, visit: www.nationalgeographic.com/history/article/legendary-spanish-galleon-shipwreck-discovered-on-oregon-coast

The legend of the Santo Cristo de Burgos

Galleons began sailing between Spanish colonies in the Philippines and Mexico in 1565, and traded goods for 250 years

In 1693, a Manila galleon sailing the trade route while carrying Chinese silk, porcelain, and blocks of beeswax for making candles, veered off course and vanished

Despite their many treacherous journeys made across the Pacific, remarkably few Manila galleon shipwrecks have been found since, and only three are known from the west coast of the Americas

This was backed up by a number of written accounts from the first half of the 19th century, that report sightings of a European shipwreck and beeswax

It became known as the ‘Beeswax wreck’, due to the distinctive blocks of beeswax that washed ashore for centuries and were traded by the tribes and settlers

Honeybees are not native to the Americas so, before they were imported from Europe in the 17th century, Asian beeswax was imported to Spanish colonies where beeswax candles were required for Catholic services

By the late 20th century, tales of the ship and the hunt for its booty were widely reported in Oregon newspapers