The first victim washed up in September 2016. The police in Valencia, Spain, saw a blue shark dying in the surf along a tiny stretch of beach. They lugged the eight-foot corpse to the yard behind the police station. Then they called Jaime Penadés-Suay, who soon suspected foul play.

The shark had what looked like a bit of wood embedded in her head. He pulled. Out slid a broken fragment from a swordfish sword that had lanced straight through her brain.

“I thought it was crazy,” said Mr. Penadés-Suay, a graduate student at the University of Valencia and a founder of LAMNA, a Spanish consortium that studies sharks. “I was never sure if this was some kind of joke.”

But since then at least six more sharks have washed up on Mediterranean coasts, each impaled with the same murder weapon, and almost always in the head. In the latest example, an adult 15-foot thresher shark — itself equipped with a whiplike tail capable of stunning blows — washed up in Libya. Inside was a foot of swordfish sword that had broken off near its heart.

Taken together these cases offer what may be preliminary scientific evidence of high-speed, high-stakes underwater duels that had previously been confined to fisherman’s tales. 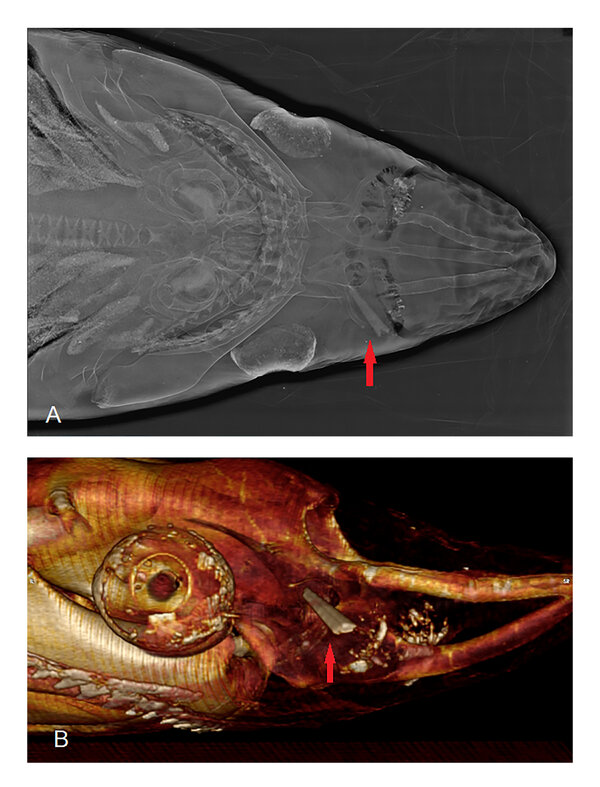 Historically, whalers, fishermen and scholars saw swordfish as stab-happy gladiators. But modern scientists were skeptical. Sure, swordfish sometimes impale boats, whales, submarines and sea turtles. But perhaps these swordfish had aimed for smaller prey, and rammed something else by mistake.

Or maybe not. When sharks die, their bodies typically sink to the bottom of the sea. So a published record of half a dozen stranded sharks with suspiciously precise wounds could indicate that these encounters are common — and that a swordfish sword is sometimes exactly what it sounds like.

“Now at least we have evidence that they might use it really as a weapon, intentionally,” said Patrick Jambura, a graduate student at the University of Vienna.

Mr. Jambura led a study of the recent dead thresher shark, which turned up this April. Sara Al Mabruk at Omar Al-Mukhtar University in Libya had spotted a video posted by local citizen scientists. In the video, a man approaches a shark on the beach, then pulls a sword from its back like a bizarre twist on Arthurian legend. “I was like, ‘Oh come on Sara, we have to do something about this. That’s just incredible,’” Mr. Jambura said.

It’s also puzzling, their team reported this month in the journal Ichthyological Research. Fishermen often catch swordfish with mangled swords, so breaking one isn’t fatal, but they do help their owners swim faster and feed. And they don’t seem to grow back, at least not for adults. So why do some swordfish risk losing them?

Most victims of swordfish stabbings in the Mediterranean have been blue or mako sharks. Both of those species prey on young swordfish, suggesting one explanation: Maybe juvenile swordfish had felt like their lives were threatened and fought back.

But this time the sword fragment looked as if it had come from an adult swordfish, which typically are not eaten by a thresher shark.

Mr. Penadés-Suay doubts competition would be enough of a motive given the risks involved in taking on a big, whip-tailed shark. Instead, he thinks, the swordfish might have felt attacked and tried to protect its territory.

Either way, scientists know little about the behavior. Or about swordfish in general, despite how plentiful they are in restaurants and at grocery store fish counters. “Commercial species are only studied for commercial purposes, and that’s a problem,” Mr. Penadés-Suay said.

After partnering with a seafood company, he is now working to measure both a thousand swords and the overall size of the fish that wielded them. That should help scientists extrapolate from the little crime-scene shards left in sharks to the full swordfish that did the deed.

Scientists searching for these rare incidents also want to hear from the public. “Maybe a fisherman for 13 years has been catching sharks, and every year he finds this,” Mr. Penadés-Suay said. ”We need everybody to be looking into this.”