No messing around! Sharks don’t bother wasting time chasing after prey they are unlikely to catch, study finds

With their razor-sharp teeth and agility in the water, sharks are without a doubt one of the most terrifying predators to roam the planet.

Now, a new study has shed light on their feeding habits – and suggests they don’t bother wasting time when it comes to mealtimes.

Researchers from Flinders University studied Port Jackson sharks and found the animals don’t chase prey if they are unlikely to catch them. 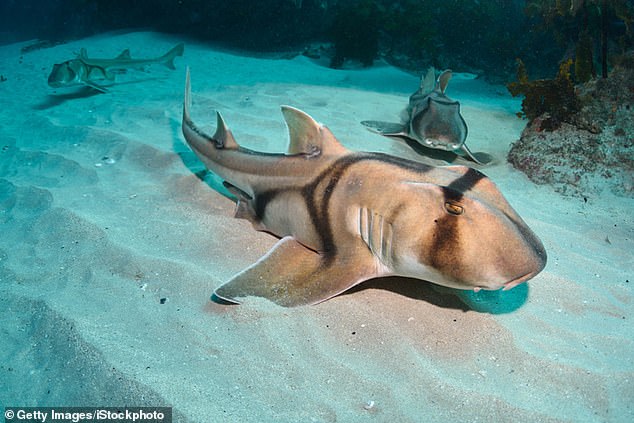 The Port Jackson Shark is a distinctive blunt-headed fish that has a spine in front of both dorsal fins.

Port Jackson Sharks have harness-like markings which cross the eyes, run along the back to the first dorsal fin, then cross the side of the body.

This pattern makes it very easy to identify the species.

Port Jackson sharks can be found in the depths of the Pacific Ocean off the coast of Australia and are easily identified by their distinctive harness-like markings which cross the eyes and run down the side of the body.

In the study, the team studied three groups of captive Port Jackson sharks to understand their response to smell.

The sharks were exposed to the smell of squid for four minutes, three times a day for 21 days.

The first group was rewarded with food every time they smelled the squid, while the second group was only rewarded every other day.

Meanwhile, the third group was never rewarded with food.

The results revealed that sharks in the first group who were always rewarded quickly learnt the task, becoming better and faster at reaching the target.

However, the opposite was true for sharks in the second and third groups.

Having gone unrewarded, the sharks reduced their natural response to smell and no longer left their starting position.

Dr Dennis Heinrich, who led the study, said: ‘Our study revealed that while shark behaviour can change when frequently rewarded with food, the learnt response diminishes when reward frequency is decreased and even disappears when no reward is provided.

‘The observed decline in response to a repeated stimulus, or habituation, may act as a driver of optimal foraging strategies, enabling sharks to quickly abandon low-yielding foraging patches in search of more productive sites.’

The findings could have implications for wildlife tourism, where sharks are often lured over using food or smells. 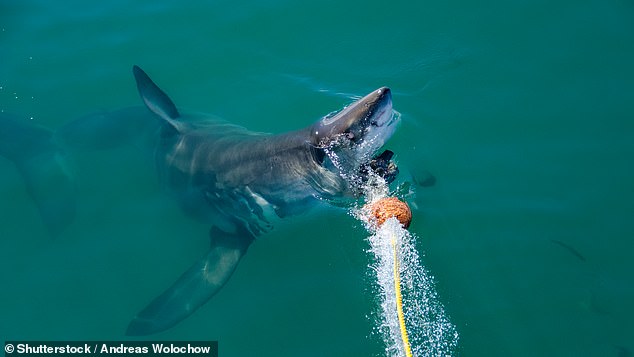 The findings could have implications for wildlife tourism, where sharks are often lured over using food or smells

Professor Charlie Huveneers, senior author of the study, said: ‘One of the questions I’m most often asked is how much can sharks learn, and how this relates to wildlife tourism that uses food or smell to attract sharks.

‘From a wildlife tourism perspective, our results show that learnt behaviour can be reduced by decreasing feeding frequency, but that using olfactory cues only (i.e. smell) might not always be sufficient.

‘The knowledge gained from this study can help account for learnt behaviours and habituation when managing wildlife tourism moving forward. A balance needs to be found between attracting sharks for tourism purposes and minimising behavioural response and possible learnt behaviours.’

The team now hopes to test their findings with species that are more commonly targeted by wildlife tourism, such as white sharks.

Sharks rely on their sense of SMELL to navigate

Researchers from the University of California, San Diego, led by shark expert Dr Andrew Nosal, captured 25 leopard sharks near off the Californian coast, near La Jolla.

They focused on shoreward navigation by the sharks to test whether olfaction, there sense of smell, contributes to ocean navigation.

Roughly half of the animals had their sense of smell temporarily impaired – using cotton wool with petroleum jelly in the animals’ nares, or their ‘nostrils’. They were then taken 9 km (5.6 miles) out to sea.

On average, sharks which could use their sense of smell normally ended up 62.6% closer to shore after the four hour period, and followed relatively straight paths.

But the sharks with impaired smell finished only 37.2% closer to the shore, and took the long way round – following significantly more twisted and turning paths.