Coffee might one day do more than just wake you up in the morning: Scientists use spent grounds as a coating for electrodes that could be used as a sensitive tool for detecting human brain waves

Coffee could be used to create an environmentally friendly coating for electrodes, that may one day help scientists better understand human brainwaves, study finds.

Researchers from University of Cincinnati in Ohio, used spent coffee grounds in their experiment, finding it an efficient electrode coating for sensitive measurements.

Tests revealed that coffee coated electrodes were three times more efficient at spotting the release of dopamine – the pleasure chemical – in a test tube, when compared to traditionally produced carbon fiber electrodes.

‘The material could eventually help scientists get a better handle on brain activity and detect minute levels of neurotransmitters,’ they wrote. 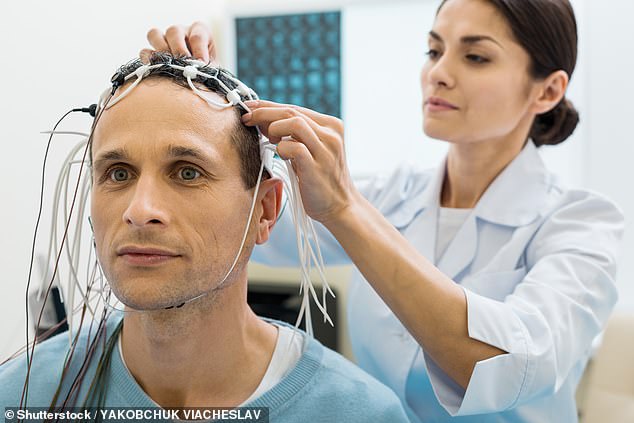 Coffee could be used to create an environmentally friendly coating for electrodes, that may one day help scientists better understand human brainwaves, study finds

They are part of a wider movement to find ways to re-use materials, to create more environmentally friendly sensors, tools and solutions in organic chemistry.

‘I saw papers about using spent grounds to produce porous carbon for energy storage, and I thought maybe we could use this conductive material in our neurochemistry detection work,’ says principal investigator Dr Ashley Ross.

‘And I also thought this would be a good excuse to buy lots of coffee for the lab!’ said Ross, a self-professed coffee lover.

The traditional micro-electrodes that neuroscientists use are commonly made from carbon fiber – which is made of fine, solid carbon strands bundled together.

Making them is typically an arduous and expensive process, involving multiple steps and harsh chemicals, so there has been a movement to find alternatives.

Ross wants to fabricate entire electrodes with carbon from coffee grounds because this type of approach would be inexpensive and environmentally friendly.

As a first step toward realizing that goal, the researchers adapted the material from the grounds as a coating for conventional electrodes.

Kamya Lapsley, who was a summer student in Ross’s lab and is currently an undergraduate at Kent State University, took this initial challenge on. 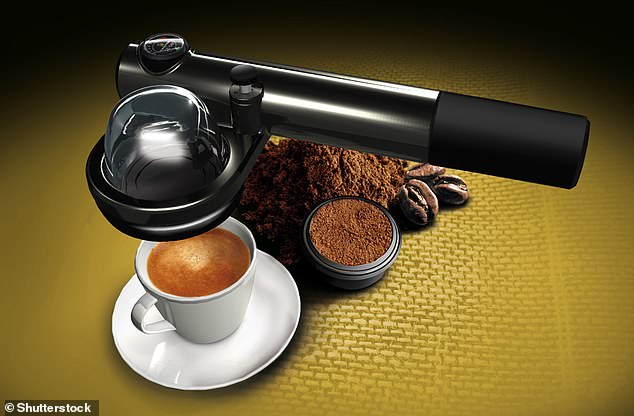 Researchers from University of Cincinnati in Ohio, used spent coffee grounds in their experiment, finding it an efficient electrode coating for sensitive measurements

She started by taking used coffee grounds and heating them in a tube furnace at 1,300 degrees Fahrenheit.

After they were well scorched, Lapsley and colleagues added the material to a potassium hydroxide solution that actives the carbon, and opens holes.

Then, they heated the mixture again under nitrogen gas to remove any undesired byproducts. What was left was an inky slurry full of flecks of porous carbon.

For this initial version, the team coated existing carbon fiber electrodes in the coffee material, but in future will make them entirely from spent coffee.

It isn’t as simple as dipping the electrode in the gunky granules at the bottom of a coffee pot.

They have to convert it to a carbon fluid that can stick to the electrode.

This also involves ‘cleaning’ the granules of impurities.

This is the process:

The resulting electrodes are up to three times more efficient at detecting neurotransmitters in the brain.

The team say in future this could allow for faster, clearer and cheaper detection of brain waves.

Finally, they diluted this sludge with water, and dipped the carbon fiber electrodes, coating them with a layer of coffee 100 times thinner than a human hair.

They then used a fast-scan technique to compare the performance of coated and uncoated electrodes for sensing small quantities of dopamine, a neurotransmitter.

With this technique, they applied a rapidly varying voltage to the electrode to alternately oxidize and reduce dopamine – to mimic the release in the brain.

They found that electrodes coated with the coffee-derived carbon reached ‘oxidative current levels’ three times higher than bare carbon fibers – without the coating.

This suggests that the coated electrode offered a more sensitive surface for dopamine detection.

Not only does the porous structure allow more dopamine molecules to participate in the reaction because of the coating’s large surface area, it also momentarily traps dopamine molecules in the crevices of the electrode, explained Ross.

These properties increase the sensitivity and allow the researchers to carry out faster measurements, making brain wave detection more efficient and accurate.

Next, the team will make carbon fiber electrodes from scratch with porous carbon from waste coffee grounds, which would give the electrodes uniform porosity not just on the surface, but also through and through.

Ross predicts that this will boost their neurochemical detection abilities because an even larger total surface area of the electrode will be exposed to adsorb the dopamine molecules.

At the same time, Ross plans to put the current coffee-coated electrodes to the test in the brains of live rats.

In the meantime, there will be no lack of starting materials to carry out the next stages of the project, for the entire lab seems to love their brew.

‘The grad students provided quite a bit of coffee grounds – more than we will ever need,’ says Ross. ‘My entire lab really loved this project.’

The findings are due to be presented at the ACS Spring conference.

Caffeine has been deemed safe for consumption in doses of up to 400 mg per day for the general population.

Studies suggest it can have a variety of health benefits, including combating liver disease and type two diabetes.

Research has even suggested it could even help people live longer.

It is the world’s most widely consumed stimulant and reports show it can boost daily energy expenditure by around five per cent.

Researchers have said combining two to four daily coffees with regular exercise would be even more effective at keeping the weight off.

A 2015 study showed just a couple of cups a day could help millions of dieters stay trim once they have achieved their desired weight.