Human cells have been turned partially transparent in a laboratory.

Researchers from the University of California Irvine in the US injected colour-changing proteins from a squid called Doryteuthis opalescens into kidney cells.

Proteins called reflectins allow the animal to alter its transparency and this helps it camouflage and avoid predators.

These proteins were harvested and then inserted into human cells which allowed the scientists to turn them partially transparent.

Researchers say the technique could be used by other scientists to get a clearer view of the processes inside living cells and tissues.

Writing in the study, published today in the journal Nature Communications, the researchers say they ‘drew inspiration from the structures and functionalities’ of squid skin.

They then designed and engineered human cells with the reflectin proteins  which resulted in ‘tunable transparency-changing and light-scattering capabilities’.

Cephalopods, a group of animals including squid and octopus, are able to control the appearance of their skin at will.

They have specialised skin layers that control their colour and transparency. These are called chromatophores and leucophores, respectively.

Both lie between the muscle and the upper layer of skin, called the epidermis. Chromatophores sit directly on top of leucophores.

In leucophores there are several proteins, including one called reflectin A1, which alter how much light is reflected and transmitted through the cell.

The squid can. at will, activate these cells and they will rearrange the reflectin proteins to either reflect or transmit light. If light is fully transmitted, it appears transparent.

The Doryteuthis opalescens has a stripe on its head which turns white, from transparent, when these proteins are activated.

Scientists inserted these proteins into embryonic kidney cells and used concentrations of salt to trigger them.

The arrangement of the proteins then changes and alters how much light is scattered and made the cells more transparent.

How animals use colour to avoid predatation

There are several ways in which animals can camouflage themselves against the surrounding environment.

Countershading is a form of camouflage used by animals where one side of the animal is darker than another.

Often, in the animal kingdom, an animal’s back (dorsal side) is dark while its underside (ventral side) is light.

In 2017, an immaculately preserved fossil of an armoured dinosaur was found that is believed to have used this form of camouflage.

Despite being 18-foot-long and weighing nearly 3,000-pounds, the dinosaur was still huned enough for evolution to prefer camouflage over confrontation.

Many animals can change their colour to blend in with their environment.

Chamaeleons have two superposed thick layers of iridescent cells that have pigment and reflect light.

There are tiny crystal in the upper layer of the skin of chameleons and depending on how relaxed they are, the nanocrystals become closer together or further apart.

This movement alters the wavelength of light that is reflected and therefore appears a different colour to the eye.

Animals such as squid and octopus change colour using specific cells called chromatophores, which change the colour of the skin.

These chromatophores are specialist cells that are controlled by nerves which alters how much the pigment sac is changed and therefore a difference in colour. 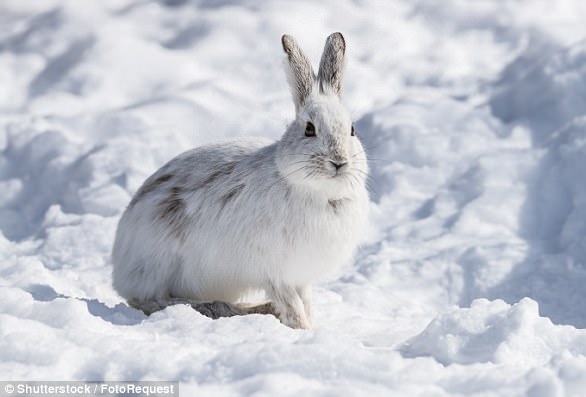 These changes can occur almost instantaneously and are controlled by nerves or chemicals in the body.

Some mammals such as arctic foxes and Snowshoe hares change the colour of their pelt over time in line with the increased snowfall associated with winter.

Snowshoe hares have a brown coat during the summer but develop a white pelt in the winter to avoid being easily spotted by predators.

As well as colour change they can manipulate the texture of their skin in order to blend in with the terrain.

The surface texture of an animals skin can also go a long way towards helping it blend in against its background, especially if the background is rough.

Octopus and squid for example often live on rocky coral reefs or the sea floor where the texture is very uneven.

By contracting their papillae – tiny muscles in the surface of their skin – they can mimic different textures.