The science behind the perfect GRAVY: Experts say the ideal jug should be stirred for exactly 2.5 minutes and served at 156F – and suggest adding RASPBERRY JAM

With Christmas now just nine days away, many of us will be excitedly planning what’s going on the festive menu.

No Christmas dinner would be complete without copious amounts of gravy – but do you have the perfect recipe down?

Scientists have revealed the best way to get a flawless gravy, and say the ideal jug should be stirred for exactly 2.5 minutes, include all the juices from your roast, and be served at precisely 156F (69C).

They also suggest some rather bizarre additions, including raspberry jam, soy sauce and mustard. 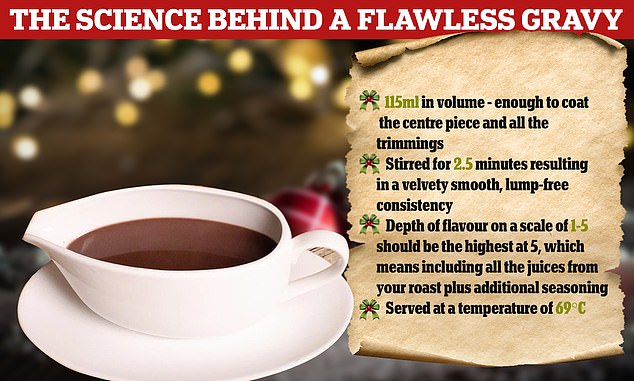 Scientists have revealed the best way to get a flawless, festive gravy just in time for Christmas. Their findings suggest that the ideal jug should be stirred for exactly 2.5 minutes, include all the juices from your roast, and be served at precisely 156F (69C) 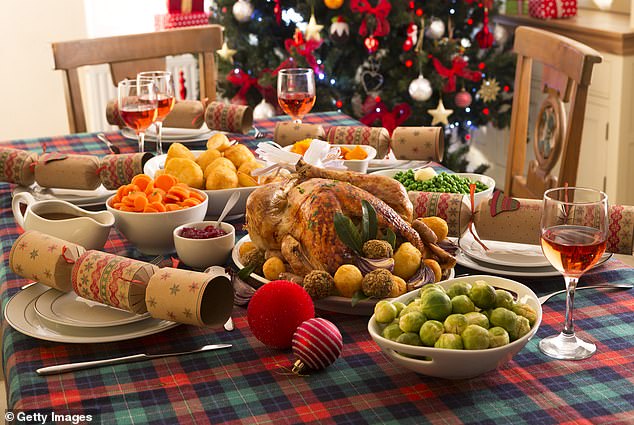 With Christmas now just nine days away, many of us will be excitedly planning what’s going on the festive menu

According to UCL’s Professor Mark Miodownik this is what you need to do to make the perfect gravy:

University College London’s Professor Mark Miodownik decided to take a scientific approach and analyse what makes the perfect gravy to sit alongside our Christmas dinners.

Working with Ocado, he surveyed 2,000 Brits on their gravy dos and don’ts, and came up with several suggestions.

His research found that gravy needs to be 115 milliliters in volume – enough to coat the centre piece and all the trimmings.

It needs to be stirred for precisely 2.5 minutes, resulting in a velvety smooth, lump-free consistency and it should be served at 156.2F (69C).

When it comes to depth of flavour, the expert insisted it should include all the juices from the roast and seasoning.

He said: ‘Playing a guessing game in the kitchen can be risky business, so being able to pin the perfect gravy on concrete factors is a handy tool.

‘In combining all the essential factors above, we’ve been able to crack this Christmas code once and for all.’

Professor Miodownik’s technique for the perfect gravy was developed as it was revealed to be the number one food Brits messed up at Christmas (31 per cent), forcing them to start all over again.

Of the 2,000 Brits surveyed, nearly a quarter of us (22 per cent) admitted to making it too lumpy, whilst one fifth (20 per cent) said their gravy always ended up too watery. 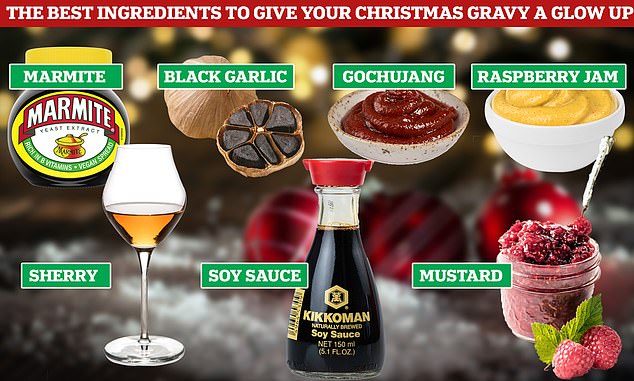 Laura Rowe, food expert at Ocado, has also suggested some less scientific ways to spice up your gravy this Christmas. She listed a range of ingredients that cooks could try out this festive season, including some rather wacky suggestions

Laura Rowe, food expert at Ocado, has also suggested some less scientific ways to spice up your gravy this Christmas.

She listed a range of ingredients that cooks could try out this festive season, including some rather wacky suggestions.

Ms Rowe said: ‘We know that being responsible for the Christmas dinner can come with high expectations from family and friends, so to make it a little easier to get even the trickiest of elements right – the gravy – we’re sharing our favourite flavour-enhancing ingredients.

‘We’ve even teamed up with a scientist to crack the code for the perfect jug of gravy every time.’

Chicken Tikka and Ready Salted Crisps are the best pairing for a crisp sandwich, according to scientists 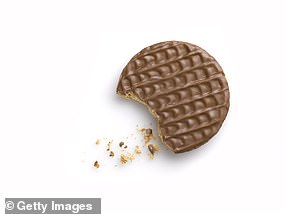 With their crunchy biscuit base and luxurious chocolate topping, Chocolate Digestives have been favourites among biscuit lovers since they launched back in 1925.

But one question has been heavily debated about the biscuits – which way up should they be eaten?

Now, researchers from Oxford University believe they have settled the debate, and claim that you should pick up the biscuits with the chocolate side up, but flip them over before eating them.

The experts say this method allows the brain to register the chocolate coating, while flipping them before eating maximises the ‘oral-somatosensory experience’ of the chocolate melting on the tongue.

How to eat a chocolate digestive:

1. Remove the biscuit from the packet at room temperature

2. Bring it towards your mouth with the chocolate side facing up

3. As you go to take a bite, turn the biscuit over so the chocolate is facing down

4. Take a substantial bite with the chocolate directly hitting the tongue first

5. If you’re by yourself, eat initially with the mouth open to hear the crunching of the biscuit which makes the taste sensation more memorable

6. Chew slowly after the first few mouthfuls to maximise the full taste experience