Scent away! Scientists have found a way to bottle the smell of what scares bugs and it could help protect plants

Good news for the green-fingered! Plant pests like aphids could soon be scared off thanks to scientists who have managed to bottle the scent of predatory insects.

Researchers from the Pennsylvania State University have identified the specific chemicals that ladybirds give off that aphids can pick up on — and flee from.

The finding may provide an alterative to regular pesticides, to which many bugs are growing resistant, while eliminating the risk of environmental contamination.

Insecticides can also accidentally kill the predators that feed on pests like aphids, thereby inadvertently compounding the problem in the long run. 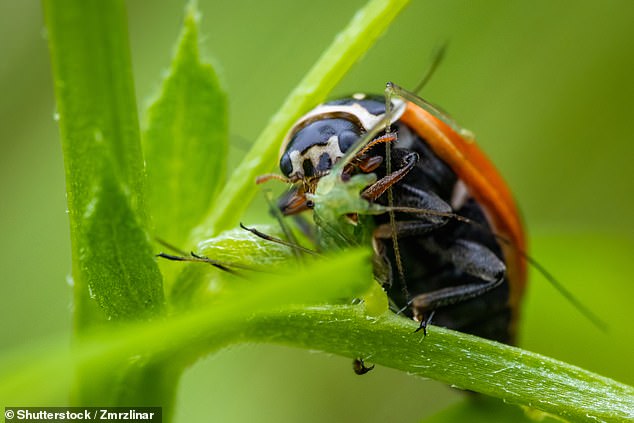 Good news for the green-fingered! Plant pests like aphids could soon be scared off thanks to scientists who have managed to bottle the scent of predatory insects. Pictured: a ladybird eats an aphid, a common and highly destructive pest

Despite their common names, ladybirds (or ladybugs) are in fact a family of small beetles.

Ladybirds can be found in nearly all the major crop-producing regions of the world’s temperate and tropical countries.

They are usually considered beneficial insects by gardeners and farmers, as they feed on various agricultural pests like aphids and scale insects.

Many ladybirds lay their eggs in the middle of colonies of these pests — thereby ensuring that their larvae have prey to feast on as soon as they hatch.

There are some species, however, whose precense can have drawbacks.

Members of the ladybird sub-family Epilachninae, for example — like the Mexican Bean Beetle — are themselves herbivorous.

The crop damage they can cause is usually minor, but can become significant in years in which their ranks swell in numbers due to, for example, a temporary lack of predation by enemies like parasitoid wasps.

‘It is not uncommon [for us] to use our senses to avoid risky situations,’ said paper author and entomologist Sara Hermann of the Pennsylvania State University.

‘If a building was on fire, we as humans could use our senses of sight or smell to detect the threat,’ she added, as an example.

‘There is evidence for such behavioural responses to risk across taxa that suggest prey organisms can detect predation threats, but the mechanisms for detection aren’t very well understood, especially with insects.’

‘Insects rely on olfactory cues to find food, mates and places to live, so this is a great opportunity to investigate how to use these smells to manipulate their behaviour,’ agreed paper co-author and fellow Penn State entomologist Jessica Kansman.

‘We always see the females and they reproduce asexually. That’s why they’re such bad pests as they don’t need a male and can continually have babies.’

The minute menaces breed rapidly — meaning that, when insecticides are employed against them, populations can easily recover if even a small number are missed.

And aphids commonly occupy the undersides of leaves or the space in-between plant petals where sprays may prove unable to reach.

On top of this, many aphid species have developed a resistance to common classes of pesticide like carbamates, organophosphates, and pyrethroids.

However, aphids are also the preferred food of ladybirds (also dubbed ladybugs) — a family of small beetles that gardeners typically welcome as a source of sustainable pest management.

In their study, Dr Hermann and colleagues demonstrated that aphids and other plant-eating, or ‘herbivorous’, insects will steer clear of fields and gardens if they catch a whiff of predators like ladybirds on the air.

In addition, it appears that aphids also slow their reproduction rates and increase the frequency with with their young grow wings when exposed to the odour cues given off by ladybirds.

Both responses are designed to help the tiny pests get physically away from threats. 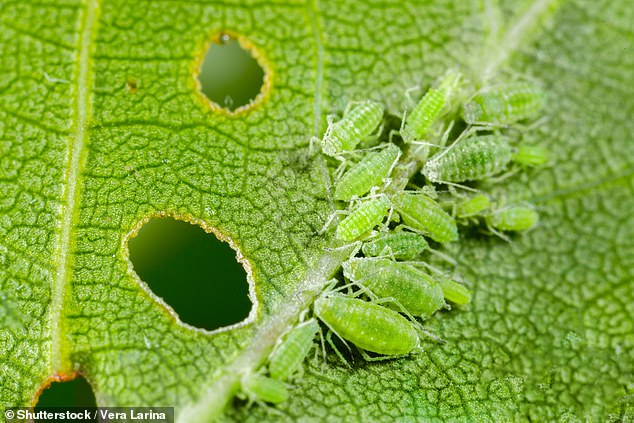 Given these observations, the team next set out to see if the smell of ladybirds alone would be enough to put the wind up aphids — and encourage them to find plants elsewhere to devour.

To do this, they first used so-called ‘gas chromatography–mass spectrometry’ to separate and identify the individual chemicals that make up the ladybirds’ smell.

Having isolated these compounds, the team exposed them one-by-one to live aphids to determine which of the chemicals it was that the pests react to in the wild.

The insects’ responses were measured by attaching a so-called electroantennogram to their antennae, which allowed the researchers to record the strength of the impulses each smell caused to be sent from the bug’s antennae to their brains. 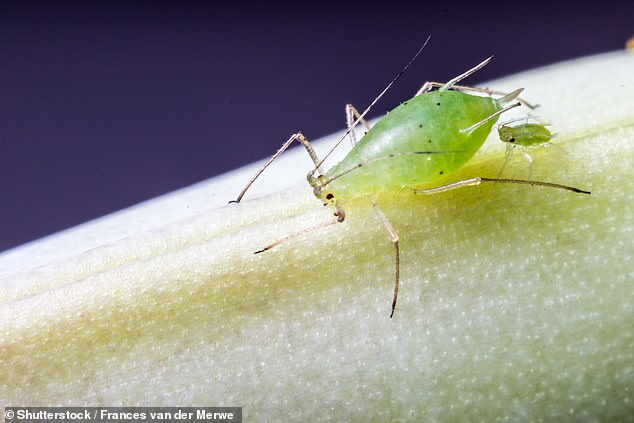 The team next set out to see if the smell of ladybirds alone would be enough to put the wind up aphids — and encourage them to find plants elsewhere to devour. To do this, they first used so-called ‘gas chromatography–mass spectrometry’ to separate and identify the individual chemicals that make up the ladybirds’ smell. Pictured: a female aphid and her young nymph

Dr Hermann and colleagues found that — of the many compounds that make up the odour emitted by ladybugs — aphids exhibited the strongest responses to so-called methoxypyrazines.

(Methoxypyrazines are also found in certain wines, like Cabernet Sauvignon and Sauvignon blanc.)

Having identified the chemicals needed to scare off aphids, the team next combined them into a special blend that they placed in essential oil diffusers — such that might eventually be able to be deployed in a garden or agricultural field.

In tests of this blend in the lab, the team found that green peach aphids (which feast on crops like broccoli, cabbage and kale) preferentially avoided routes that had been splashing with the scent.

Similarly, the team found that dousing plants with the chemical mixture discouraged aphids from settling on them.

With their initial study complete, the researchers are now looking to see if they can achieve the same kind of results in the field that they saw in their lab tests.

The team also want to determine the effective dispersal area of their scent diffusers — and explore whether could be used to combat other pests on different crops by harnessing the smell of other predatory insects.

Finally, the team are also collaborating with a manufacturing firm to develop scent diffusers for both the industrial agriculture and home gardening markets.

The full findings of the study were presented at the American Chemical Society (ACS)’s Fall 2021 National Meeting & Exposition, which is being held both in Atlanta and virtually from August 22–26.

Declines in recent months to honey bee numbers and health caused global concern due to the insects’ critical role as a major pollinator.

Bee health has been closely watched in recent years as nutritional sources available to honey bees have declined and contamination from pesticides has increased.

Bees use sugar to fuel flights and work inside the nest, but pesticides decrease their hemolymph (‘bee blood’) sugar levels and therefore cut their energy stores.

When pesticides are combined with limited food supplies, bees lack the energy to function, causing survival rates to plummet.