A genetic treatment has been discovered which can regrow teeth, offering hope for the millions of people living with dentures.

Suppression of the gene USAG-1 with an antibody treatment was found to allow teeth to grow back. 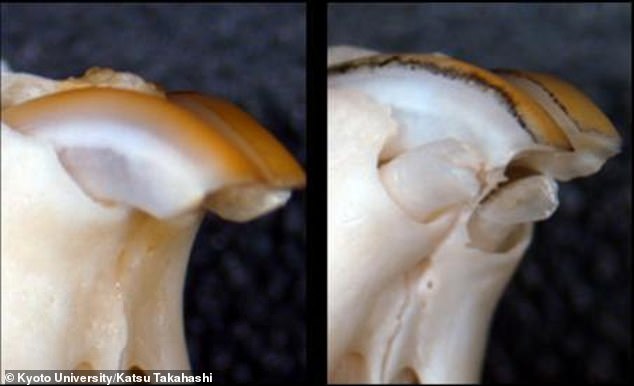 An antibody treatment targets the gene USAG-1 and stimulates tooth growth. In mice and ferret studies, missing teeth were seen to regrow (pictured)

Researchers in Japan at the universities of Kyoto and Fukui looked at the molecules which are known to be involved with dental growth.

Some of these chemicals are also involved in growth of other organs, so finding a gene which targets only teeth is difficult.

However, the researchers thought the gene USAG-1 —uterine sensitization associated gene-1 — may be a viable target.

‘We knew that suppressing USAG-1 benefits tooth growth. What we did not know was whether it would be enough,’ says study author Katsu Takahashi from Kyoto University Graduate School of Medicine.

Monoclonal antibodies which target USAG-1 were given to animals in a single dose and were enough to regenerate an entire tooth.

After successful trials in mice, the researchers branched out to ferrets, a more complex animal with similar dental patterns to humans.

‘Our next plan is to test the antibodies on other animals such as pigs and dogs,’ says Dr Takahashi.

Current treatments for tooth loss are limited to dentures and other forms of artificial tooth replacement. 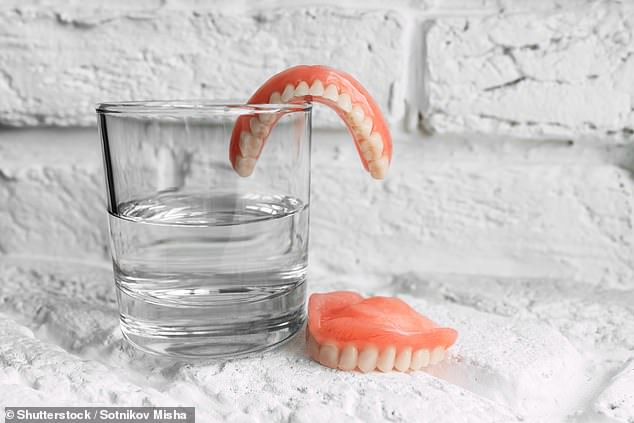 Current treatments for tooth loss are limited to dentures and other forms of artificial tooth replacement. However, they are not permanent and are often expensive while being inferior to real teeth

However, they are not permanent and are often expensive while being inferior to real teeth.

‘Conventional tissue engineering is not suitable for tooth regeneration,’ adds Manabu Sugai of the University of Fukui, another author of the study.

‘Our study shows that cell-free molecular therapy is effective for a wide range of congenital tooth agenesis.’

The study is published in Science Advances.

Adults who suffer from gum disease are TWICE as likely to have high blood pressure, study warns

People with severe gum disease are twice as likely to have high blood pressure, according to a new study.

A study of 250 people with periodontitis — severe gum disease — found people with the condition are 2.3 times more likely to have a systolic blood pressure higher than 140 mm Hg, the medical threshold for hypertension.

Periodontitis is an infection of the gums that often leads to bleeding and can result in tooth or bone loss.

Researchers from University College London studied both systolic and diastolic blood pressure — how much force the blood is under when the heart contracts and relaxes, respectively.

Both metrics are measured in millimetres of mercury (mmHg) and people with gum disease have, on average, a 3.36 mm Hg higher systolic pressure.

Among orally healthy people only seven per cent of individuals had a systolic blood pressure above 140 mm Hg.

This figure doubles to 14 per cent among people with gum disease.