A glove-like device which taps into a user’s semi-conscious mind to record the creativity of their dreams has been developed by scientists.

The glove, named the Dormio, records users as they begin dreaming before falling fully asleep – a state known as hypnagogia.

This stage takes place in the moment between sleep and wakefulness, and it’s the period in which you’re more likely to remember your dreams.

Scientists hope that allowing people to control their dreams in a semi-lucid state will help spark creative thought.

The device is the work of Adam Horowitz and his colleagues at the MIT Media Lab.

It is made up two parts: a glove worn by the user and an app on the user’s phone which will issue trigger words, such as ‘rabbit’, when the sensors in the glove pick up the person falling into hypnagogia. 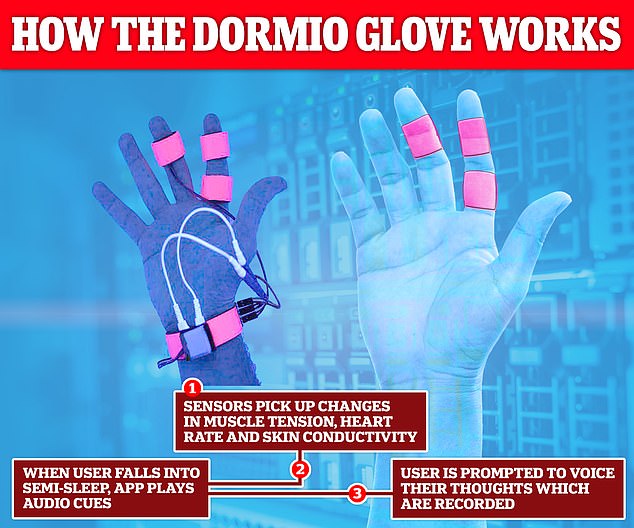 The glove, named the Dormio, records users as they begin dreaming before falling fully asleep – a state known as hypnagogia

The glove does this by the use of sensors which record changes in muscle tension, heart rate and skin conductivity.

Fifty users were asked to say in their semi-conscious state what thoughts they were having, which the app recorded.

This was done three times as each person fell further into sleep. They were then woken up fully and asked to write a story about the trigger word.

The MIT team found that the trigger word was incorporated into users’ dreams.

And when compared with users who had not fallen into a semi-sleep state, the Dormio users were considered to be more creative in a story-writing challenge.

The researchers kept the subjects in hypnagogia for as long as possible by issuing new trigger words each time they started to fall asleep. 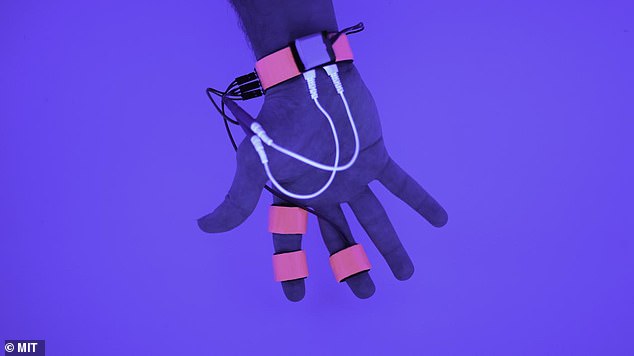 According to Horowitz’s results, all subjects ‘remembered and reported seeing the prompt word during their dream state, showing successful inception and recall of stimuli into said dream state.’

Volunteers who used the Dormio spent an average of 158 seconds longer working on a creative story after experiencing hypnagogia.

Almost all volunteers scored higher after using Dormio than during the control test.

An earlier attempt to access the state of hypnagogia was used by the likes of inventors Thomas Edison and Nikola Tesla, writer Edgar Allen Poe and artist Salvador Dali.

Known as the steel ball technique, it involved them napping with a ball in their hand and then, when they were woken by the ball crashing to the floor, quickly writing down the ideas generated by their dreams.

Dreams are stories and images that are created during a period of sleep.

They can tell a convoluted story of anything which resembles deep-rooted fears to ambitious dreams.

They are somewhat of an enigma to scientists as how they occur and what causes them is still an emerging field.

Though a few people may not remember dreaming, it is thought that everyone dreams between three to six times per night.

It is thought that each dream lasts between five to 20 minutes.

Around 95 per cent of dreams are forgotten by the time a person gets out of bed.

Humans often form dreams as they pass through the phases of sleep towards deep sleep.

This form of half-wakefulness occurs withing minutes and allows for the formation of microdreams.

The content of these microdreams appear to be random and we usually don’t have any memory of them when we wake.

There are five phases of sleep:

This stage forms 45-55 per cent of total sleep.

It is very difficult to wake someone during stages 3 and 4, which together are called ‘deep sleep.’

People awakened while in deep sleep do not adjust immediately and often feel groggy and disoriented for several minutes after they wake up.

This forms 12-15 per cent of total sleep