Scientists invent ‘living concrete’ using sand, gel and bacteria that could be used to create buildings that can heal their own cracks or absorb pollution

Environmentally friendly ‘living concrete’ has been developed by scientists mixing sand, gel and bacteria to create a building material as strong as cement.

The new material contains a form of primitive algae that first evolved on Earth 3.5 billion years ago and soaks up energy from the Sun.

With the algae, the new material can self-heal and has a smaller carbon footprint than concrete, say University of Colorado Boulder scientists.

The project team, led by Wil Srubar, says it opens the door to ‘living buildings’ in future that can seal their own cracks and ‘suck up dangerous toxins from the air’. 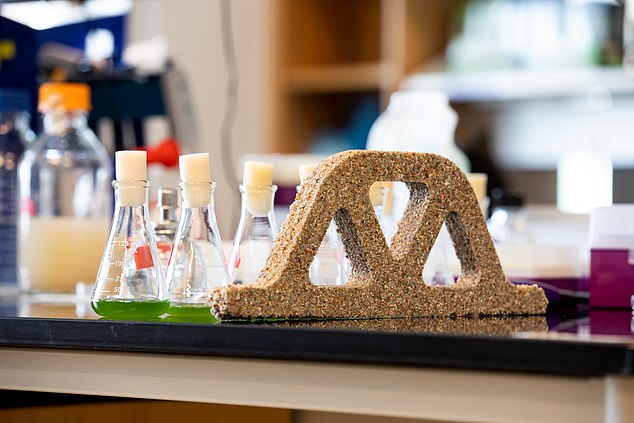 Environmentally friendly ‘living concrete’ has been developed by scientists mixing sand, gel and bacteria to create a building material as strong as cement. The team created a small structure out of sand that the bacteria grows in

Cement hasn’t changed much in over a century. The US team say their material will revolutionise the construction industry – by literally bringing it to life.

Biological materials like wood are already used, but they are dead, said Mr Srubar, who heads the Living Materials Laboratory at the University of Colorado Boulder.

‘Why can’t we keep them alive and have that biology do something beneficial, too?’

Srubar and his team used cyanobacteria – green microbes that live in the water and can manufacture their own food – in the creation of their living material.

While these bacteria are quite small and usually unicellular, they often grow in colonies large enough to see and so ‘were ideal for this situation’, he said.

The team from Boulder Colorado started by creating a scaffold using sand and hydrogel for the bacteria to grow in.

The hydrogel contains moisture and nutrients that allow the bacteria to reproduce and mineralise – a process similar to the formation of seashells in the ocean. 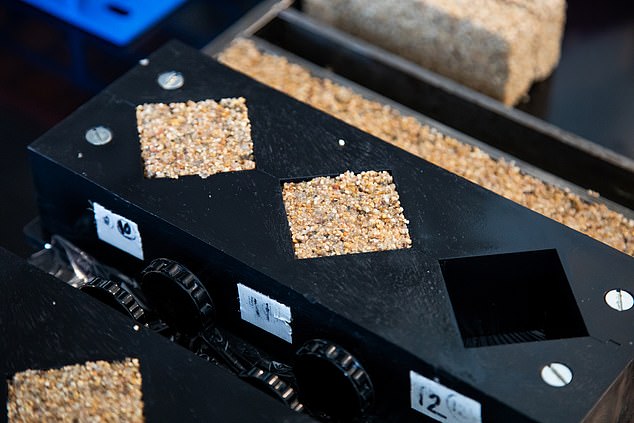 The hydrogel contains moisture and nutrients that allow the bacteria to reproduce and mineralise, a process similar to the formation of seashells in the ocean

These microbes absorb carbon dioxide from the air and make calcium carbonate, the main ingredient in cement.

‘It’s a lot like making rice crispy treats where you toughen the marshmallow by adding little bits of hard particles,’ said Mr Srubar.

Concrete is the second most-consumed material on earth after water.

The production of cement, the powder to make concrete, alone is responsible for six percent of CO2 emissions, and concrete also releases CO2 when it cures.

He said the hydrogel-sand brick is also capable of reproducing itself, demonstrating the potential for ‘exponential material manufacturing’.

By splitting the brick in half, the bacteria can grow into two complete bricks with the help of some extra sand, hydrogel and nutrients.

Instead of manufacturing the bricks one by one, Srubar and his team demonstrated that one parent brick could reproduce up to eight bricks after three generations.

The research is still in its early stages and the team said more work needs to be done to address some of the drawbacks.

One of the biggest issues is that the brick needs to be completely dried out to attain the maximum strength – which stresses the bacteria and compromises its viability.

Using these as physical switches, the researchers can control when the bacteria grow and when the material stays dormant to serve structural functions.

‘This is a material platform that sets the stage for brand new exciting materials that can be engineered to interact and respond to their environments’, said Mr Srubar.

‘We’re just scratching the surface and laying the foundation of a new discipline. The sky is the limit.’ 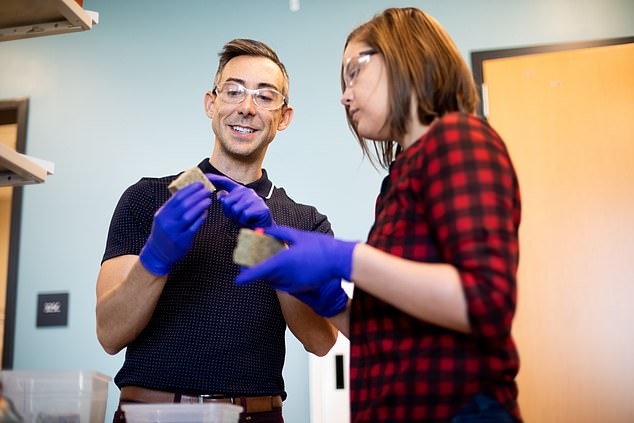 Wil Srubar demonstrates the blocks to a researcher on his team. He says they could be used to create houses on Mars in the future

He envisions bacteria with different functionalities to create new materials – such as ones that sense and respond to air pollution.

Other applications include building structures where there are limited resources, like the desert or even another planet – such as Mars.

‘In austere environments, these materials would perform especially well because they use light from the sun to grow and proliferate with very little exogenous material needed for their growth,’ he said.

‘It’s going to happen one way or another, and we’re not going to be trucking bags of cement all the way to Mars. I really do think we’ll be bringing biology with us once we go.’

He imagines a future in which suppliers could mail out sacks filled with the desiccated ingredients for making living building materials.

Just add water, and people on site could begin to grow and shape their own microbial homes.

‘Nature has figured out how to do a lot of things in a clever and efficient way. We just need to pay more attention.’

The research is published in the journal Matter.

HOW IS CONCRETE MADE?

In its simplest form, concrete is a mixture of paste and aggregates, or rocks.

The paste, composed of cement and water, coats the surface of the fine and coarse aggregates.

Through a chemical reaction called hydration, the paste hardens and gains strength to form the rock-like mass known as concrete.

Within this process lies the key to a remarkable trait of concrete: it’s plastic and malleable when newly mixed, strong and durable when hardened.

These qualities explain why one material, concrete, can build skyscrapers, bridges, sidewalks and superhighways, houses and dams.

Polymer concrete is a type of concrete that uses polymers, typically resins, to replace lime-type cement as a binder.