Un-brie-levable! Scientists create a vegan cheese from ALGAE that they claim looks and tastes just like a cheddar

Scientists claim to have created a vegan cheese that actually tastes like the real thing.

The cheese, developed by a Singapore-based company, is made from algae – a photosynthetic microorganism usually found near water.

Vegan cheeses are already on the market and aren’t renowned for their flavour, but this new version mimics traditional cheese, according to its creators.

It boasts a ‘tangy taste profile’ that bursts with umami, just like Cheddar, and is packed with healthy B vitamins.

It can be sliced for a cheese board, melted in a toastie, added to a sandwich, or slathered over crackers or bread as a rich and gooey spread.

It’s not available in the UK yet, but the firm is reportedly in talks with some major European dairy firms. 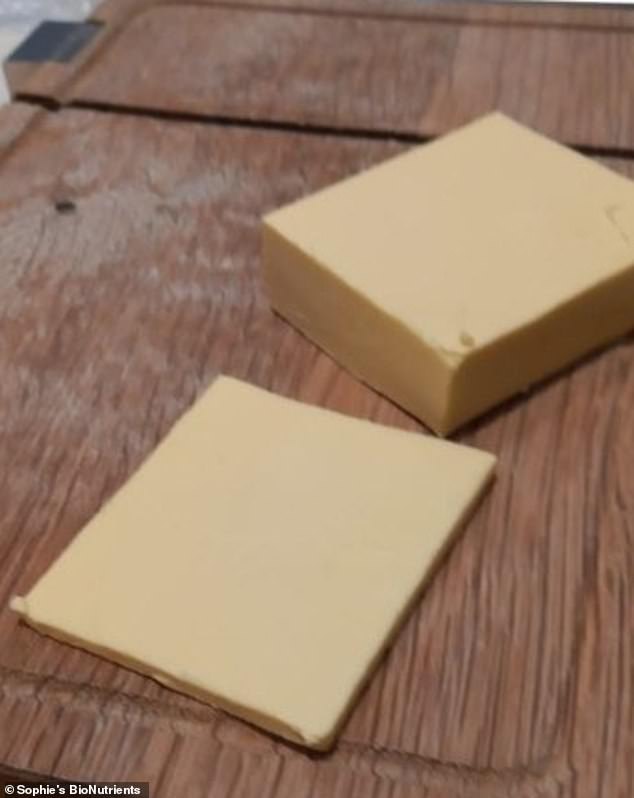 Microalgae are tiny photosynthetic microorganisms found in both freshwater and marine aquatic systems, each only a few micrometres in size.

Already used as a a food supplement and as aquafeed for fish, they are an excellent source of amino acids, fatty acids, vitamins, minerals and antioxidants.

This new vegan cheese, made from Microalgae milk, packs a umami punch.

Umami is one of the five tastes that register on the tongue, along with sweet, salty, bitter and sour.

First identified by a Japanese researcher in 1908, it’s generally used to describe a rich, meaty foods, like beef and broths, as well as yeast extracts like Marmite.

It was created by Sophie’s BioNutrients, a ‘sustainable’ food production technology company, together with Ingredion Idea Labs innovation centre in Singapore.

The firm announced the creation of their dairy-free, protein-rich microalgae milk – from which this new cheese has been made – earlier this year.

‘Microalgae is one of the most nutrient-rich and ductile resources on the planet,’ said Eugene Wang, co-founder and CEO of Sophie’s BioNutrients.

‘Today we have shown another facet of the unlimited possibilities this superfood can offer – a dairy and lactose-free alternative to cheese that, thanks to microalgae, offers a higher protein content than most available dairy-free alternatives.’

A one-ounce serving of the semi-hard microalgae cheese provides double the daily allowance of vitamin B12.

Already used as a a food supplement and as aquafeed for fish, microalgae are an excellent source of amino acids, fatty acids, vitamins, minerals and antioxidants.

The tiny photosynthetic microorganisms are found in both freshwater and marine aquatic systems, each only a few micrometres in size.

Microalgae species are cultivated in big vats called bioreactors, fuelled by a constant source of light and carbon dioxide.

‘At Sophie’s Bionutrients, we grow micro-algae inside of bio-reactors,’ the firm says on its website. ‘This process can be precisely controlled to produce protein in a matter of days.

‘We will use local food waste, and limited amounts of water to produce micro-algae protein within metropolitan areas in many parts of the globe.

‘In addition, we can generate whole-algae ingredients in a variety of food applications in plant based meat and functional food.’

Sophie’s BioNutrients’ microalgae milk, revealed in May this year, starts off as a micro-algae protein flour.

This flour is homogenised with water to create the dairy-free milk alternative, which is suitable for lactose-intolerant people as well as vegans. 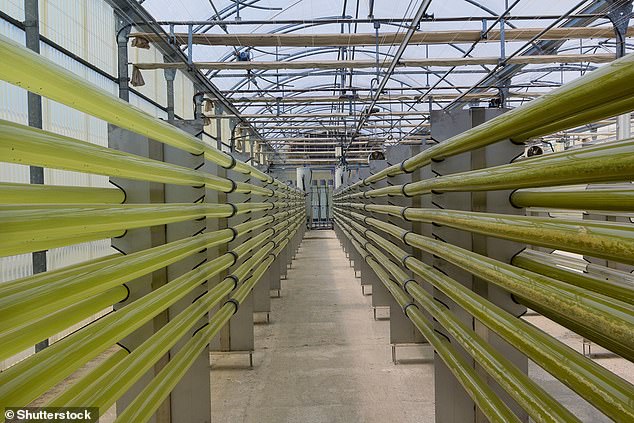 Microalgae species are cultivated in big vats called bioreactors (pictured here in a stock image), fuelled by a constant source of light and carbon dioxide, to form a powder

MailOnline has contacted Sophie’s BioNutrients for more information of the preparation method of the cheese, as well as when it might hit the UK market.

According to the firm, it also wants to create a yoghurt, also made from its milk, as well as protein flour that can be used to make vegan ‘meats’, cakes and other baked goods.

The firm said vegan and dairy-free options for cheeses are on the rise in response to growing consumer demands for plant-based alternatives.

According to international market research firm Research and Markets, the global vegan cheese market was valued at $1.2 billion in 2019 and is estimated to reach $4.42 billion by 2027.

Traditional cheese is predominantly made from the milk of cows, which have a big carbon footprint.

Farmed cows and other animals release huge amounts of methane – a greenhouse gas – into the atmosphere through burps and farts.

ALGAE AS A SUSTAINABLE FOOD SOURCE

Microalgae are a nearly untapped resource, and are found in both freshwater and marine aquatic systems. Although they are only few micrometers in size, they produce amino acids, fatty acids, vitamins, minerals, antioxidants, polymers and carbohydrates.

Only a handful of algal species are used commercially now, but hundreds of strains have the potential to become food and feed sources.

Microalgae are currently used as a food ingredient, a food supplement and as aquafeed for fish.

Microalgae are commercially cultivated using several methods that have a range of sustainability footprint.

Nanno is currently being grown at a commercial scale using brackish water in outdoor ponds with added carbon dioxide in Texas, and in photobioreactors using seawater and carbon dioxide at a geothermal power station in Iceland.

In contrast, producing the same amount from Nanno raised in an open pond with brackish water requires only 20 liters of freshwater and 1.6 square meters of nonfertile land.