Mamma mia! Italian scientists come up with a way to keep pasta fresh for an extra MONTH

Real Italian pasta can take a lot of effort to knead, shape and cook until it is perfectly al dente.

So it is unsurprising that Italian researchers were desperate to make it last longer before needing to be thrown away.

The solution involves storing the pasta in the perfect atmosphere to prevent bacterial growth and adding probiotics to the flour. 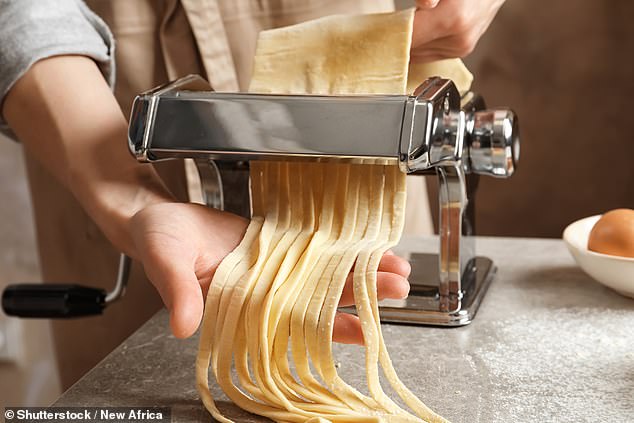 ‘Flat-pack pasta’ morphs from 2D to 3D while cooking

Flat-pack pasta which only takes on its iconic shape after cooking has been created by scientists.

A study found imprinting strips of raw pasta with grooves in a specific pattern allows them to be stored flat but morph into classical pasta arrangements when served.

The breakthrough was tested on pasta but could apply to other foodstuffs and would allow food manufacturers to reduce packaging and improve transport efficiency.

Fresh pasta, like an Italian mama would make, lasts only two to three days, while industrially made pasta currently has a shelf life of between 30 and 90 days.

The new method allows fresh pasta to last up to 120 days, an experiment found.

The study follows previous research by separate groups of Italian researchers suggesting pizza might protect against illness and death, and that people have smaller waistlines when they eat more pasta.

Dr Francesca De Leo, a co-author of the study from National Research Council (CNR), the largest public research institution in Italy, said: ‘This research came from pasta factories wanting to extend the shelf life of their product, but it is also a pity for people who buy ravioli or tortellini to have it spoiling in the fridge.

‘It is very time-consuming to have to go out to the supermarket to buy more pasta.

The researchers, describing their work in the study Frontiers in Microbiology, say homemade, artisanal and industrial fresh pasta products like filled ravioli are all vulnerable to bacteria.

Most fresh pasta sold today is therefore produced using heat-treatment, which is like pasteurisation for pasta.

Pasta is stored in modified atmosphere packaging (MAP), with oxygen removed and replaced with other gases within a plastic film package.

The new process, which avoids artificial ingredients, changes the ratio of MAP gases and combination of plastic films used in the pasta packaging to better control bacterial growth. 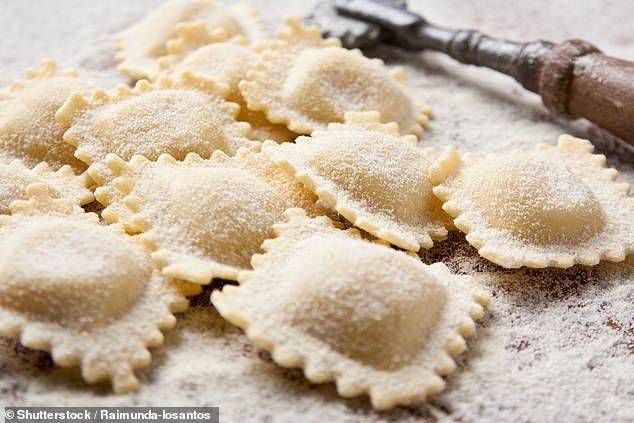 The researchers say homemade, artisanal and industrial fresh pasta products like filled ravioli are all vulnerable to bacteria (stock image)

The Italian researchers also added a a multi-strain probiotic mixture to curb the growth of bacteria.

They tested their breakthrough on a short, thin twisted pasta type called trofie, and compared it to normal packaging.

The combination of probiotics and new packaging was found to help the pasta last for 30 days longer than usual.

A robot chef has been trained to ‘taste’ food at different stages of the chewing process – just like humans do.

The machine, created at the University of Cambridge, consists of a probe that can detect salt levels in food attached to the end of a robotic arm.

Experts used the robot to taste scrambled eggs during different stages of mastication, including a runny liquid as it would appear just prior to swallowing.

According to the scientists, robotic chefs that ‘taste test’ dishes instead of humans could be a fixture of busy restaurant kitchens of the future.