Shut Down STEM: Scientists around the world go on one-day ‘strike for black lives’ to protest against systemic racism in academia

Members of the STEM — science, technology, engineering and mathematics — community have gone on a 24-hour strike to support the Black Lives Matter movement.

The hashtags #ShutDownSTEM, and #ShutDownAcademia circulated widely on social media, as did support for ‘Strike For Black Lives’.

It received the backing of prestigious scientific journals AAAS and Nature, as well as the popular pre-print site arXiv.

Researchers from across the scientific spectrum were encouraged to cease publication, research and self-promotion and instead use June 10 to think about how to tackle institutional racism in academia. 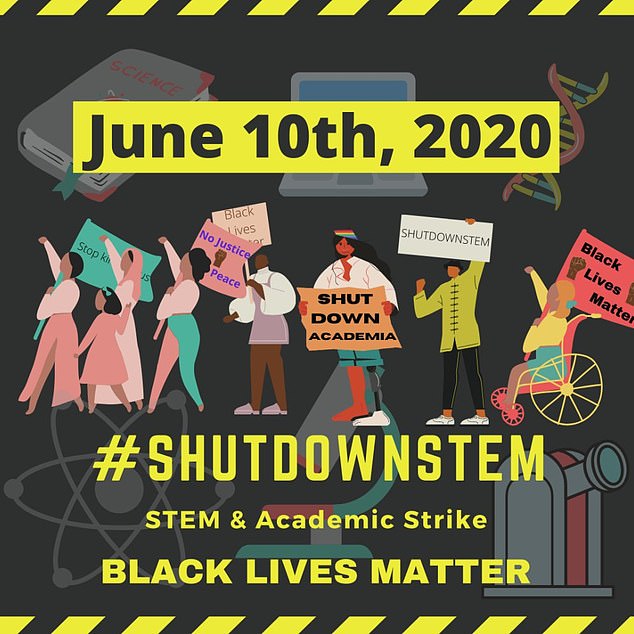 The hashtags #ShutDownSTEM, and #ShutDownAcademia circulated widely on social media, as did support for ‘Strike For Black Lives’

Organisers of the #ShutDownForSTEM write on their website: ‘In the wake of the most recent murders of Black people in the US, it is clear that white and other non-Black people have to step up and do the work to eradicate anti-Black racism.

‘As members of the global academic and STEM communities, we have an enormous ethical obligation to stop doing ‘business as usual.’

‘No matter where we physically live, we impact and are impacted by this moment in history.’

The scientific community has thrown its support behind those protesting for racial equality in the US, and around the world, in the wake of George Floyd’s murder at the hands of the police in Minneapolis.

Individuals and organisations participating in the movement are being urged to ‘stop all usual academic work for the day, including teaching, research, and service responsibilities’.

In response to this, Nature has delayed publication of research which was initially scheduled for release today.

Writing in an editorial, the journal admits it is ‘one of the white institutions that is responsible for bias in research and scholarship’.

It says it will be using the entirety of June 10 to work on ways to change this in the future.

Nature is using the day to work on and publish content about supporting Black people in academia and STEM.

The only exception to this is COVID-19 articles, due to the urgency of the ongoing pandemic.

Online website arXiv, the backbone of research for physicists, has also shut up shop for the day.

The homepage of the site has been altered to reflect the site’s support for the protest, with a prominent black box explaining the campaign.

David Charbonneau, Professor of Astronomy at Harvard, a white man, tweeted his support of the protest. He also revealed a startling statistic laying bare the devastating lack of diversity in academia

Eleonora Presani, Executive Director of arXiv, tweeted: ‘This is not a US only issue. Unfortunately systematic racism exists everywhere in the world, in many different forms.

‘Take this day to think how racism affects your country and your university.’

Institutional racism is a significant problem in STEM fields and science as a whole, with under-representation and a lack of opportunities hindering the path to equality.

David Charbonneau, Professor of Astronomy at Harvard, tweeted his support of the protest.

He also revealed a startling statistic laying bare the devastating lack of diversity in academia.

‘The @Harvard Department of Astronomy has graduated 425 PhDs since 1925. One of those was awarded to a Black scientist. So, that’s 0.24%, a profoundly racist history. #Strike4BlackLives’, he said.

‘There is no way to look at that fact and think we are not racist, that astronomy isn’t racist, that it’s ok because everyone was doing it.’

He went on to say that there are now nine black astronomers among Harvard’s 50 PhD students in astronomy.

Of all 18 astronomy professors at Harvard, only one is black, John Asher Johnson.

A 2012 scientific study found that, of all the physics researchers in the UK, only 0..1 per cent were black.

In a tweet, Nature Reviews Physics said: ‘It is clear that academic institutions are in need of structural change.

‘Yet with so few Black voices within the system, there is an urgent need for non-Black allies to take an active role in campaigning for change.’