The real-life flying saucer! Scientists are testing a new concept for a hovering rover that LEVITATES by harnessing the moon’s natural charge

A new hovering lunar rover has been developed by scientists, who say it will be able to levitate by harnessing the moon’s natural charge.

The device, which resembles a classic flying saucer, works by taking advantage of the electric field that builds up on the moon and other airless bodies like asteroids.

A team of aerospace engineers at MIT say the electric field builds up thanks to the direct exposure of their surface to solar radiation, due to a lack of atmosphere.

On the moon, the surface charge is strong enough to levitate moon dust more than 3ft above the ground in a similar way to static electricity makes hair stand on end.

The MIT team is disc-shaped and uses tiny ion beams to charge up the vehicle and boost the natural charge on the lunar surface, generating force on little power.

It’s just a concept at the moment and has only been tested in simulations, rather than real world environments, but they are confident it will operate as predicted.

They hope that future missions to the moon and asteroids could deploy rovers that use ion thrusters to safely hover and manoeuvre over unknown, uneven terrain. 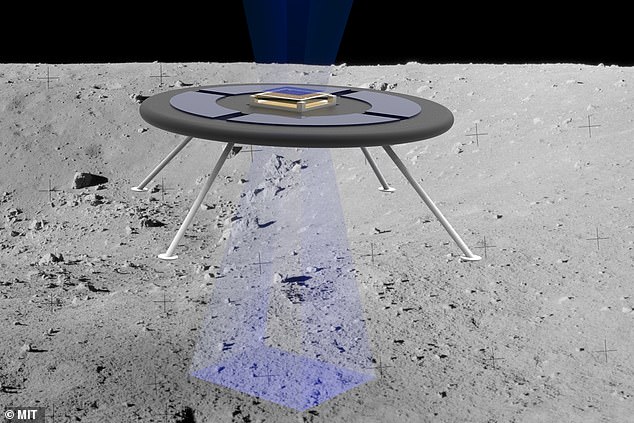 The device, which resembles a classic flying saucer, works by taking advantage of the electric field that builds up on the moon and other airless bodies like asteroids

The team’s levitating design relies on the use of miniature ion thrusters, called ionic-liquid ion sources.

These small, microfabricated nozzles are connected to a reservoir containing ionic liquid in the form of room-temperature molten salt.

When a voltage is applied, the liquid’s ions are charged and emitted as a beam through the nozzles with a certain force.

Based on this simple model, the team predicted that a small rover, weighing about two pounds, could achieve levitation of about one cmoff the ground, on a large asteroid such as Psyche, using a 10-kilovolt ion source.

To get a similar liftoff on the moon, the same rover would need a 50-kilovolt source.

Using tiny ion beams creates an overall effect that is designed to generate a relatively large repulsive force between the vehicle and the ground.

In their first feasibility study, the team found that ion boost could be strong enough to get a 2lb vehicle on the moon, or a large asteroid such as Psyche.

‘We think of using this like the Hayabusa missions that were launched by the Japanese space agency,’ according to lead author Oliver Jia-Richards, a graduate student in MIT’s Department of Aeronautics and Astronautics.

‘That spacecraft operated around a small asteroid and deployed small rovers to its surface. Similarly, we think a future mission could send out small hovering rovers to explore the surface of the moon and other asteroids.’

The thrusters they used are known as iconic-liquid ion sources, and are small micro-fabricated nozzles connected to a reservoir containing ionic liquid.

This liquid is in the form of room-temperature molten salt, that, when a voltage is a applied, charges the liquid ions and emit a beam through the nozzles.

The work, led by Paulo Lozano, builds on previous work by the team that saw them develop ion thrusters to propel and move small satellites in space.

He decided to see if this could be applied to other research into the levitating effect of the moon’s surface charge on lunar dust.

He wanted to see whether ‘a rover fitted with ion thrusters produce enough repulsive, electrostatic force to hover on the moon and larger asteroids?’

They started by modelling a small, disc-shaped rover with ion thrusters fitted to charge up the vehicle on its own.

The authors discovered this was not enough to get the vehicle off the ground.

‘Then we thought, what if we transfer our own charge to the surface to supplement its natural charge?’ Jia-Richards explained. 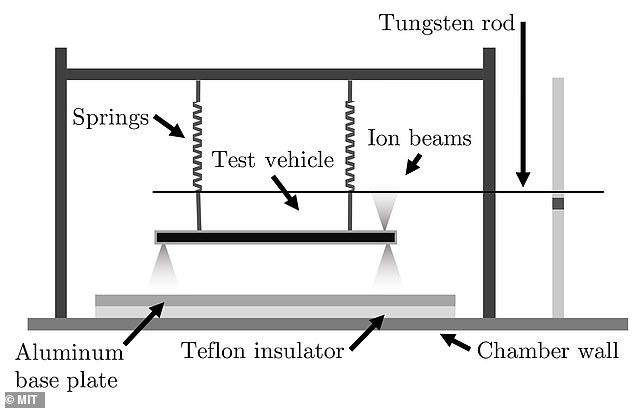 HOW IT WAS TESTED

To test the idea, the team initially modelled a small, disc-shaped rover with ion thrusters that charged up the vehicle alone.

But they found this was not enough to get the vehicle off the ground.

“Then we thought, what if we transfer our own charge to the surface to supplement its natural charge?” Jia-Richards says.

By pointing additional thrusters at the ground and beaming out positive ions to amplify the surface’s charge, the team reasoned that the boost could produce a bigger force against the rover, enough to levitate it off the ground.

They drew up a simple mathematical model for the scenario and found that, in principle, it could work.

They pointed other thrusters at the ground, and beamed out positive ions to amplify the charge already available on the surface.

They thought this boost would produce a larger overall force against the rover, generating enough to finally get it off the ground.

Mathematically they found that this would indeed work. It would require a small, 2lb rover on the moon, able to get about three inches off the ground.

On an asteroid like Psyche, they’d need a 10-kilovolt ion source, but to do so on the Moon they’d need 50-kilovolts.

‘This kind of ionic design uses very little power to generate a lot of voltage,’ Lozano said, adding ‘the power needed is so small, you could do this almost for free.’

The team then created a real world example, creating a small hexagonal test vehicle that was just 60 grams in weight, and the size of the palm of an average hand.

It was given a single ion thruster pointing up and four pointing down. They then suspended the vehicle over an aluminium surface suspended on two springs.

The entire setup was placed within a vacuum chamber to simulate the airless environment of the moon and asteroids.

Using various voltages from the thrusters, they measured the resulting forces to calculate the height the vehicle could levitate on its own.

They discovered that their experiment matched their mathematical model, and believe that Psyche and the Moon could host levitating rovers in future.

‘In principle, with better modeing, we could levitate to much higher heights,’ Lozano said, with rovers able to work over unknown and uneven terrain.

‘With a levitating rover, you don’t have to worry about wheels or moving parts,’ Lozano says.

‘An asteroid’s terrain could be totally uneven, and as long as you had a controlled mechanism to keep your rover floating, then you could go over very rough, unexplored terrain, without having to dodge the asteroid physically.’

The results appear in the Journal of Spacecraft and Rockets.