Samsung’s £2,000 smart wardrobe that KILLS 99.9% of germs including coronovirus with sterilising jets of steam goes on sale tomorrow

Samsung has launched a wardrobe that kills 99.9 per cent of all viruses — including the Chinese coronovirus sweeping the world — by steaming the items stored within.

The AirDresser wardrobe, which goes on sale tomorrow for £2,000, can remove dust while sanitising clothes as they hang, according to the Korean tech giant.

The product uses powerful jets of air and steam from the interior walls and inside the hangers to remove lingering odours, wrinkles and allergens.

According to Samsung, product tests at Korea University showed the AirDresser eliminated 99.9 per cent of four viruses – adenovirus, influenza, coronavirus and herpesvirus – which can all cause flu symptoms.

The six-foot tall device can be connected to the company’s SmartThings app which allows users can organise cleaning cycles remotely from their smartphone. 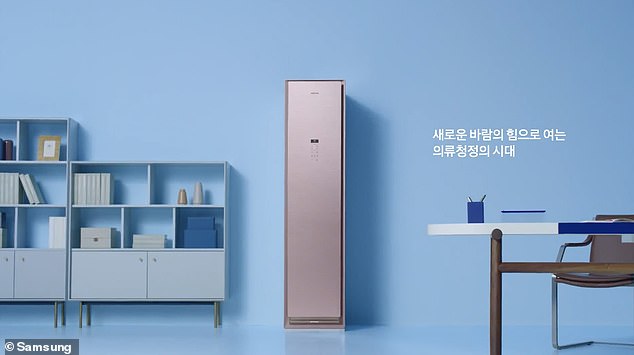 Samsung announced the global launch of its innovative AirDresser in markets around the world, including the UK, starting Thursday, January 23

‘AirDresser is Samsung’s response to consumer demand for more dynamic performance from even basic appliances, providing an easy and effective home solution to meet their needs for clean clothes that smell fresh, are germ free and look neat,’ said Jennifer Song, vice president of the Digital Appliances Business at Samsung Electronics.

The device is about a foot and a half long, meaning it can fit in the small spaces anywhere around the house, ‘blending flawlessly in any contemporary living space,’ Samsung says.

However, the AirDresser’s slender design means it can only fit three pairs of trousers and three jackets or dresses at a time.

You also can’t just use any hangers with AirDresser – the device has three specially-designed hangers that are part of the steaming cycle.

To get started, users have to hang their garments inside the machine, close the door and start a cycle on the touch-screen interface on the front door.

The user interface displays cycle type – which includes normal, quick and delicates – and time left until the cycle is complete.

Once they have done this, powerful jets of air blast from two sources inside the machine – the top of the interior and directly from underside of the hangers – to loosen and remove dust. 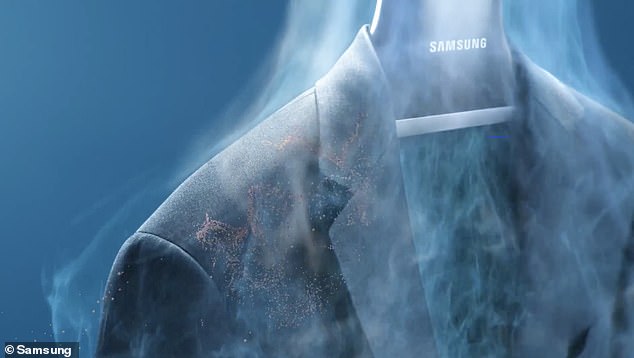 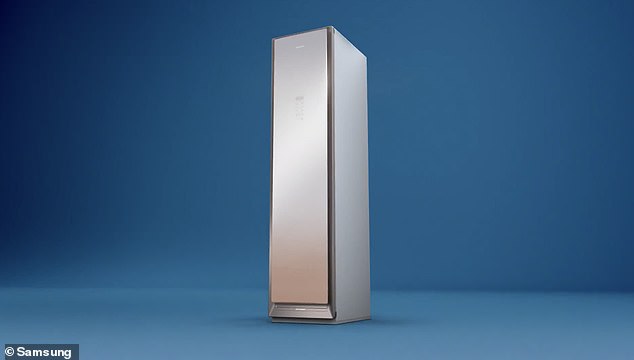 At a fairly slim 17.5-inch width, users won’t have to move around too many existing appliances to accommodate the AirDresser in their homes The Jet Air and Air Hangers release powerful air to loosen and remove engrained dust, with only minimal noise and vibration

Jets of high-temperature steam then sanitise the garments to get rid of bacteria, viruses and allergens.

Samsung’s deodorising filter, which is used in the company’s refrigerators to eliminate bad food smells using carbon filters, is also put to use in the AirDresser.

It breaks down the odorous particles in the clothing that are caused by sweat, tobacco and food while preventing unpleasant smells from building up inside.

AirDresser then provides gentle drying of clothes at low temperature to reduce shrinkage and damage, while yet another jet of steam and air relaxes clothes to get rid of wrinkles.

This final touch means the AirDresser take care of users’ big basket of ironing that usually takes up much of their Sunday afternoon.

By gently grooming clothing, AirDresser also ensures the lifespan of garments are increased as they don’t have to be washed as frequently – as regular laundering can toughen fibres and fade colours. 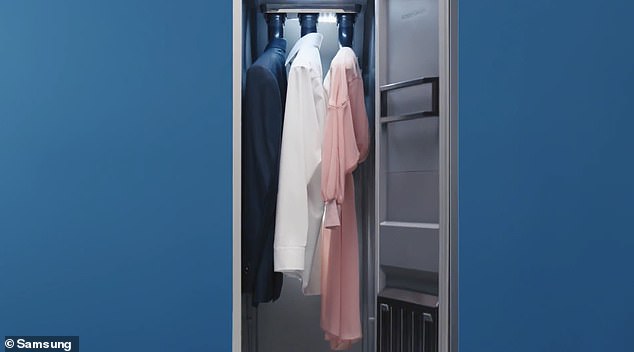 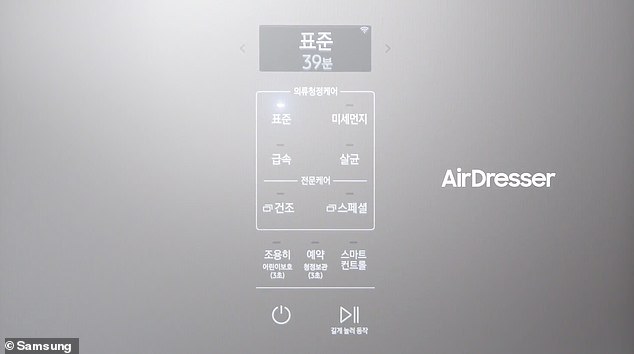 Users can select from the following cycles normal, delicate and quick, sanatise, dry and special

Samsung says AirDresser can even handle delicate materials such as fur – the system dehumidifies 90 per cent of the moisture trapped in fur, which increases its volume by 78 per cent, Samsung says.

It can also be used for routine sterilisation of other household items such as linen and soft toys.

Self-cleaning technology also dehumidifies, sanitises and deodorises the inside of the AirDresser without the use of added detergents, using a combination of heat, air and steam.

It also features portable water containers for steam to gather at the bottom, so it doesn’t require a water supply or drainage system.

Samsung claims the system has ‘minimal noise and vibration’, quiet enough for anywhere inside the home, including the bedroom.

However, even the slightest hum emitted from the AirDresser would make it best confined to the utility room or basement.