Samsung DELAYS the launch of its $2,000 folding phone until ‘at least next month’ after broken display issues, report claims

Samsung has pressed pause on the release of its new $2,000 folding phones.

The Korean tech giant is delaying the release of the Galaxy Fold until ‘at least next month,’ after repeated issues with the phone’s display, according to the Wall Street Journal.

The move comes as the firm was just days away from its official launch date on April 26th. 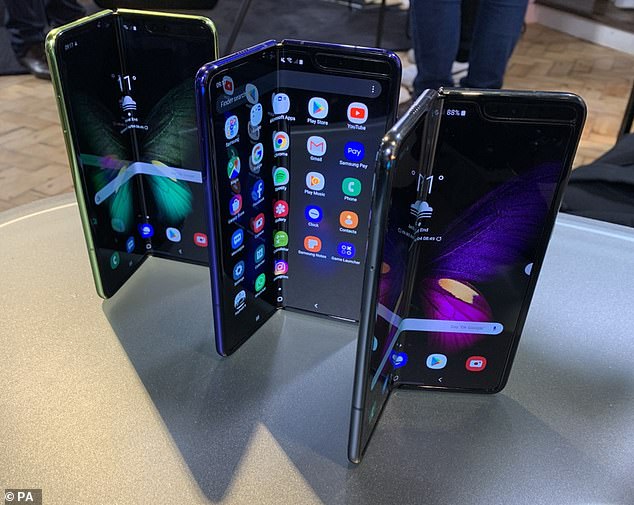 Samsung has pressed pause on the release of its new $2,000 folding phones. The firm is delaying the release of the Galaxy Fold until ‘at least next month,’ after repeated display issues

A new time frame for the device’s launch will be made public in the coming weeks, according to the Journal.

Last week, journalists who received review units ahead of the Fold launch reported experiencing issues with the interior screen.

The issues could stem from the hinge causing too much pressure on the screen, the Journal said.

Samsung responded to the complaints by saying the issue was limited to a small subset of Galaxy Folds.

‘A limited number of Galaxy Fold  samples were provided to media for review,’ the company said.

‘We have received reports regarding the main display on samples provided. We will thoroughly inspect these units in person to determine the cause of the matter.’

After just one or two days of use, users said the display began to flicker and turn black before becoming completely unusable.

Some said they had removed a protective layer on the screen that was supposed to stay on.

Meanwhile, others said they didn’t remove the protective film, but the device still stopped working.

A warning on the Galaxy Fold packaging instructs users not to remove the protective layer, according to a photo posted by T-Mobile Senior Product Manager Desmond Smith. 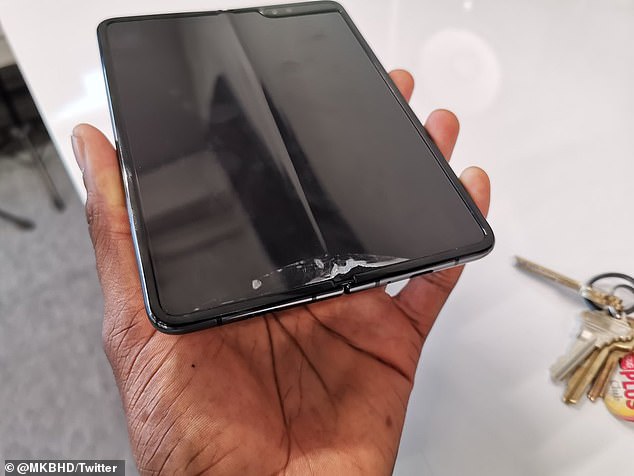 YouTube user Marques Brownlee said he removed the protective film and his device began having issues. He was just one of several other early users who experienced that issue 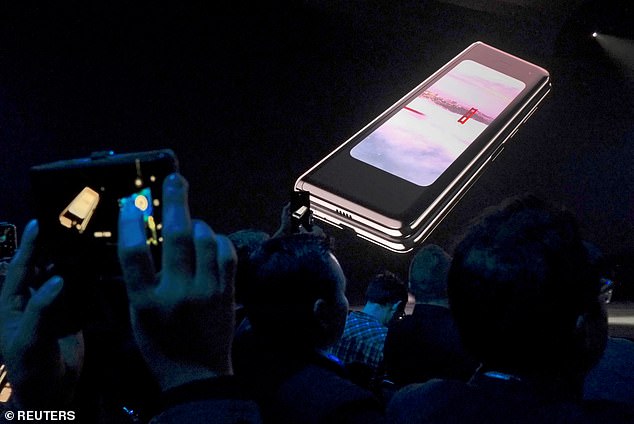 Prior to the Fold’s release, Samsung reportedly tested the phone’s folding mechanism more than 200,000 times, claiming it passed the threshold for durability

‘The screen on my Galaxy Fold review unit is completely broken and unusuable just two days in,’ Gurman wrote in a tweet.

But Dieter Bohn, executive editor of technology news site The Verge, says he left that layer on and his screen still broke.

The issues raise questions about whether or not the Galaxy Fold can withstand normal use.

Pre-orders opened for the device last month on Samsung’s website, but the device will also be available through Best Buy, AT&T, T-Mobile and Samsung stores in the U.S.

Prior to the Fold’s release, Samsung reportedly tested the phone’s folding mechanism more than 200,000 times, claiming it passed the threshold for durability.

A leaked video posted by YouTube user phoneoftime showed a glaringly obvious crease down the middle of the extra large screen.

HOW DOES SAMSUNG’S FOLDING PHONE WORK?

The Galaxy Fold, which features an unprecedented six cameras and two batteries, starts at a whopping $1,980.

In a mesmerizing demonstration, Samsung showed how the Galaxy Fold transforms from a compact smartphone that ‘fits in the palm of your hand’ into a full-sized tablet with an uninterrupted screen, thanks to a hinge that’s ‘hidden’ in the device. 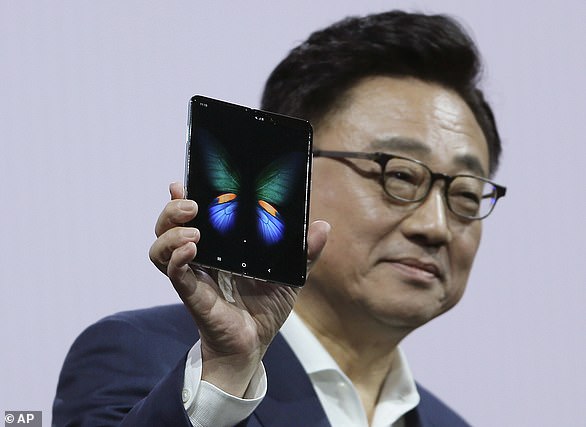 DJ Koh, President and CEO of IT and Mobile Communications, holds up the new Samsung Galaxy Fold smartphone during the Korean tech giant’s Unpacked event

It then folds closed to become a single, smaller 4.6-inch AMOLED display.

Amazingly, the full screen is almost entirely edge-to-edge and features no disruptive hinge down the middle, allowing it to ‘open naturally’ and giving it a ‘seamless, elegant look.’

Samsung said it worked with Google to help Android app developers optimize their apps for the revolutionary folding display design.

The interior screen is big enough that users can run three apps at one time.