Six genes have been found in the DNA code of Bernese mountain dogs, Rottweilers and golden retrievers which increase the risk of histiocytic sarcoma (HS), a rare blood cancer that also affects humans.

Four of the locations are single genes which but the major genetic risk factor is found on chromosome 2 and consists of two genes.

Each of the five locations can manifest in a variety of ways, but they all have a cancerous guise which, if possessed by a dog, increase the risk by up to 15 per cent.

The more of the bad genes a dog inherits, the greater its risk of the disease, researchers say. 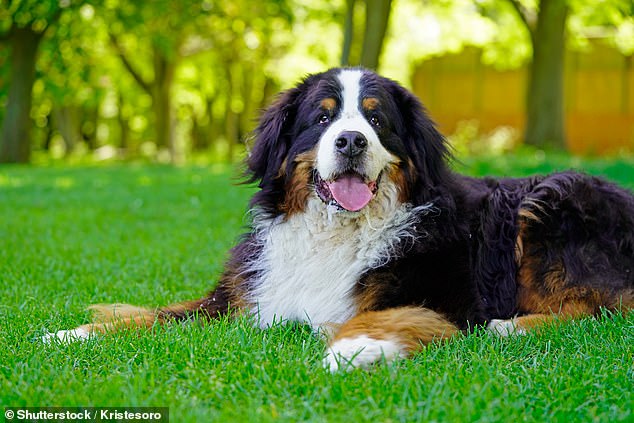 Rottweilers, golden retrievers and Burmese mountain dogs have been shown previously to be pre-disposed to this type of cancer, accounting for a hugely disproportionate number of cases.

Researchers from the University of Rennes took DNA samples from 300 dogs, covering all three breeds.

More than half (59 per cent) of the samples were from animals stricken with the cancer, and the rest were unaffected pets.

‘This study took advantage of dog breed predispositions to decipher the genetic bases of histiocytic sarcoma, a rare human cancer,’ the authors write in their study, published in PLOS ONE.

It revealed that specific forms of six genes were strongly associated with the cancer.

One location in particular, known as CDKN2A on chromosome 2, contains of two genes (CFA11 and HSA9q) which are the main guilty party leading to the disease.

However, the team also identified four other genes scattered across chromosomes 2, 5, 14 and 20.

Three of these five chromosomal regions were found to also be linked to other cancers, not just histiocytic sarcoma.

They were found to also increase the risk of lymphomas and osteosarcomas in Rottweilers, and mast cell tumours in Bernese mountain dogs and retrievers.

Researchers hope that by studying histiocytic sarcoma in dogs, it can shed light on the human equivalent of the condition.

Sixty per cent of human cases of this type of cancer are metastatic and therefore extremely hard to treat.

There is no set treatment procedure, and despite aggressive chemotherapy patients often die less than six months after diagnosis.

Larger dog breeds including Great Danes and Rottweilers are at higher risk of BONE CANCER than smaller pups, scientists warn

Osteosarcoma — a painful and aggressive form of bone cancer — is more common in larger dog breeds like Great Danes and Rottweilers, a study has confirmed.

Experts led from the University of Bristol analysed health data on 906,967 dogs to identify those breeds and characteristics that might increase the risk of the cancer.

The team found that larger, heavier dogs and those with longer legs and skulls are typically at a greater risk of developing osteosarcoma.

The findings could help pave the way to new therapies for dogs suffering from osteosarcoma, and may also inform treatments for the bone cancer in humans.

‘There are increasing concerns about the wisdom of breeding dogs with extreme body shapes such as flat-faced breeds like French Bulldogs or breeds with long backs such as Dachshunds,’ said paper author Dan O’Neill.

‘This study highlights the health risks from another extreme body shape – large body size,’ the animal epidemiologist from the Royal Veterinary College added.