Robots are deployed at London’s Heathrow Airport to answer British Airways passengers’ questions and escort them to cafes, toilets and check-in zones

A pair of robots named ‘Bill’ that can help passengers navigate their way around Heathrow Airport are being deployed by British Airways.

The machines will interact with customers in multiple languages and escort them to locations in Terminal 5 such as cafes, toilets and family check-in zones.

They will be programmed to answer thousands of questions and free up staff to help with more complex queries, according to the airline.

Around 90,000 passengers travel through Terminal 5 at the UK’s busiest airport every day. BA says the two bots should help speed up their journeys. 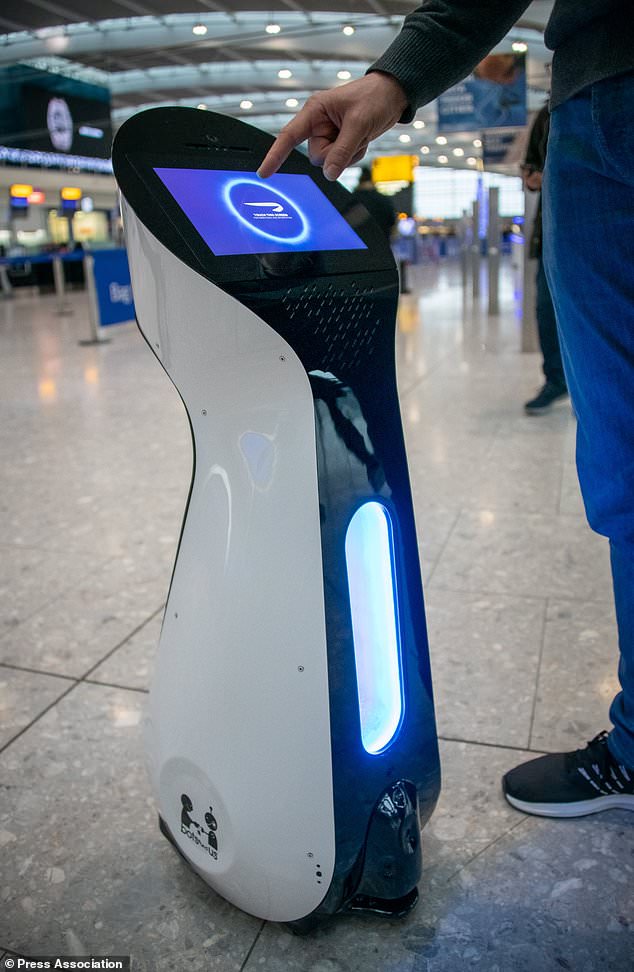 Ricardo Vidal, head of innovation at British Airways, said the carrier is constantly looking at how it can use automation to provide faster and smoother journeys.

‘These smart robots are the latest innovation, allowing us to free up our people to deal with immediate issues and offer that one-on-one service we know our customers appreciate.

‘In the future, I envisage a fleet of robots working side-by-side with our people offering a truly seamless travel experience.’

The two bots being trialled from February will be named Bill after Lieutenant EH ‘Bill’ Lawford, who captained the world’s first daily international passenger air service.

His flight operated every day from London to Paris and started in 1919.

‘Bill’ and ‘Bill’ are being supplied by west London-based firm BotsAndUs and will use geolocation technology and dozens of sensors to move around Terminal 5 without colliding with passengers or their suitcases.

The bots are part of a series of innovations being developed as part of British Airways’s £6.5 billion investment in improving customer experiences.

Other innovations include the use of artificial intelligence to cut delays in preparing aircraft for departure, driverless baggage vehicles and 3D printing of cabin parts.

Other airports are already making use of robot help including Gatwick Airport which began trialling a valet parking robot in the autumn.

Robots have also been used to provide a variety of functions at overseas airports such as in Munich, Germany; Seoul, South Korea; Shenzen, China; Amsterdam-Schiphol, Netherlands; and Edmonton, Canada.

Qualifications:  Trained on on more than ten billion sentences from a variety of areas, including scientific research and newspaper cuts